Tuesday’s Dropout Nation analysis of American Federation of Teachers’ 2014-2015 financial disclosure to the U.S. Department of Labor certainly offered plenty of insight on how it is buying influence on the national level. But the nation’s second-largest teachers’ union’s applies its influence-buying most-fervently on behalf of its locals, especially in big cities that are the battlegrounds in the battle over the reform of American public education. This is especially clear in Louisiana, where the union has spent $2.6 million to oppose the reforms in New Orleans and the rest of the state that run counter to the union’s very mission.

Since the damage from Hurricane Katrina (and the longstanding failures of the U.S. Army Corps of Engineers to ensure that levies surrounding the city could stand up to potential disaster) a decade ago, the Crescent City has become the epicenter of one of the nation’s most-important systemic reform efforts. Thanks to the Louisiana state government’s takeover of failing schools run by the Orleans Parish district, and the move to transform them into charter schools (as well as open new ones), New Orleans has now become the model of sorts for expanding school choice. Charter schools serve 79 percent of the city’s children (as of 2012-2013), according to the National Alliance for Public Charter Schools.

The transformation hasn’t been perfect by any means. There is still lingering anger among residents over how the state essentially implemented the reforms without their input. The quality of public education, though improved, is still nowhere near it should be, especially in Orleans Parish-run schools. As the Center for Reinventing Public Education also points out, the need for building out the infrastructure for families to exercise choice in informed ways also remains; this includes addressing transportation issues that result in kids traveling for as long as two hours from one part of town to another just to go to school.

All that said, the results for kids have been amazing. As Tulane University Professor Doug Harris determined in his assessment of public school performance in New Orleans, the improvements in student achievement were greater than those made by traditional districts in other cities and even better than those that could be achieved by tactics traditionalists tend to tout such as class-size reduction schemes. This is good for kids in the Crescent City and for their families, who have been subjected to the abuse of both the educational and criminal justice systems of the Bayou State for far too long.

None of this is good news to the ears of AFT, its Crescent City local, United Teachers New Orleans, or the Louisiana Federation of Teachers, the union’s state affiliate. After all, if children in New Orleans are getting higher-quality education through a Hollywood Model style of delivering teaching and curricula, than there is no need to keep the obsolete traditional district model upon which AFT (along with National Education Association) derive its influence and ideology. As it is, charters have become the dominant players in cities such as Detroit, and Washington, D.C., in which AFT operates. Given that unlike NEA, AFT has little penetration in suburbia, propagandizing against growth of charters in New Orleans — along with stopping the expansion of choice — is critical to the union’s long-term survival.

It also about the cold hard cash and power of its local. Before Katrina, UTNO had a stranglehold over education policies and practices within Orleans Parish, and had the ability to forcibly collect dues from 7,500 teachers and other employees working for the district. But with all but a smattering of schools still operated by Orleans Parish — and charter schools having the ability to not bargain with the union if they so choose — UTNO no longer has the bodies or the money necessary to oppose systemic reform. Some 1,000 teachers and others now likely make up the union’s rank-and-file, 87 percent less than the numbers on the rolls a year before Katrina reached landfall. This, in turn, isn’t helpful to AFT, whose own revenue is derived from the per-capita tax collected from every teacher and school employee compelled to pay into its units.

But AFT isn’t just concerned about New Orleans alone. After all, the Bayou State has been among the foremost states in expanding school choice and advancing systemic reform. This includes outgoing Gov. Bobby Jindal’s successful expansion four years ago of the state’s school voucher program, which now serves 7,400 children attending 141 private and parochial schools. Eight seats on the Bayou State’s Board of Elementary and Secondary Education, which oversees the department run by Supt. John White, are also up for grabs. There’s also the possibility that the Recovery School District, which oversees systemic reform in New Orleans, could also end up taking over failure mills in Baton Rouge and other cities. Particularly in Louisiana’s capital city, just 50 percent of kids attending traditional  public schools there met proficiency targets in 2013-2014.

Another hotbed, until recently, was Jefferson Parish, whose board was under the control of a reform-minded majority. Back in 2012, the board decided to ditch its contract with AFT’s Jefferson Federation of Teachers and negotiate for a deal that would give the district more flexibility in operation. This didn’t sit too well with the unit, which then sought national’s help in putting the district back under its thumb. 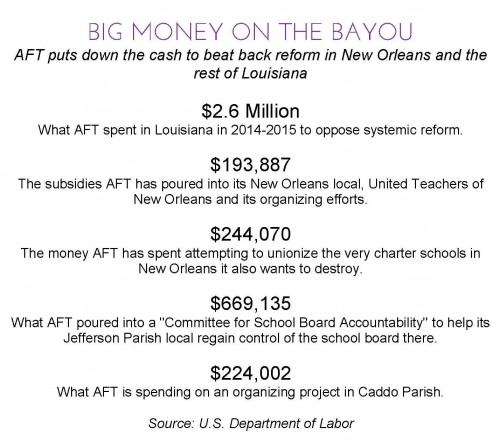 So AFT has put a lot of energy and money into demonizing Crescent City reform efforts — and stopping reform in the rest of the state.

The union subsidized UTNO to the tune of $134,593 in 2014-2015, four times levels given to the unit during the previous year. At the same time, the union kicked another $59,294 into the organizing project it controls along with the local; the union also paid teachers’ union-oriented law firm Rittenberg, Samuel & Phillips $57,654 to handle a variety of lawsuits, including one filed against Orleans Parish over the layoff of black teachers working in the district before Katrina reached shore. Over the past two years alone, AFT poured $754,878 into propping up UTNO and helping it rebuild its membership.

AFT’s work in New Orleans goes beyond subsidizing UTNO. The union has spent big on events and meetings. This includes dropping $80,490 on meeting space and “reimbursable expenses” at the swanky Loews New Orleans Hotel, $9,840 at the more-humble Homewood Suites, and $7,700 at one of the several Marriott hotels in town. Expect AFT to have dropped even more money this fiscal year for this week’s “Advancing Racial Justice” gathering, which will feature several of the union’s prime vassals, including the Schott Foundation for Public Education, Center for Popular Democracy and the Alliance to Reclaim Our Schools, all of whom are making the trip as condition of being beneficiaries of the largesse the union gets forcibly out of the pockets of teachers. AFT also spent $10,843 on materials printed by Simmons Press, a local outfit, for print materials, paid $7,500 to Lamar Media for billboards, and dropped $17,921 on ads in the Times-Picayune.

But never forget that AFT will play all the political angles. This includes going so far as to attempt to unionize the very Crescent City charters it opposes. The union subsidized its New Orleans Charter Organizing Project to the tune of $244,070 in 2014-2015. As with a similar effort in Los Angeles, AFT hopes that it can get teachers working in charters to forget all the bad things the union says about them and let it collect dues out of their precious paychecks. Lovely.

Meanwhile AFT put plenty of dough into efforts in the rest of the Bayou State. It subsidized Louisiana Federation of Teachers and its various political action funds to the tune of $462,965. While 13 percent less than in 2013-2014, it still means that AFT has sunk $995,790 into the state affiliate over the past two years. The union also paid $20,000 to lobbyist Haynie & Associates for its work at the statehouse. AFT also backed the East Baton Rouge Federation of Teachers and its organizing project to the tune of $222,420, while spending another $10,501 on so-called “Member-related costs” at a Doubletree hotel in the city. In the state’s northeast sector, AFT subsidized an organizing project focused on helping an affiliate in Monroe at a cost of $104,363. In Caddo Parish, where the AFT got involved in stopping an effort to create a new school district, the union put $224,002 into an organizing project there.

AFT’s biggest spend –and best bang for the buck — came in Jefferson Parish, where its local had lined up a slate of candidates to take out the reform-minded majority. The union put down $669,135 to fund a so-called “Committee for School Board Accountability”, which ran adds backing the local’s favored candidates. It also subsidized an organizing project there (which, as you would expect, was partially tied to rallying members to vote on Election Day) to the tune of $186,837. The union also sent paid $23,911 for hotel and meeting space at a Sheraton Hotel in Metairie, where the district’s offices are located, as well as $5,553 for room-and-board at an Extended Stay hotel.

It was money well-spent. By last December, three of the four candidates AFT and Jefferson Federation of Teachers backed won seats, giving the union a five-to-six-seat majority on the nine-member board. AFT President Rhonda (Randi) Weingarten celebrated the victory with a press release as well as two tweets on Twitter. Eight months later, the district struck a new contract with the AFT local, albeit one that is a mere seven pages long (versus 100 pages for the previous deal), and requires teachers to resolve differences with school leaders before going to the union for help. At the end of the day, a contract with the district means dollars that continue to flow into AFT’s coffers. And for the union and its 229 staffers earning six-figure salaries, that’s always a good thing.

You can check out the data yourself by checking out the HTML and PDF versions of the AFT’s latest financial report, or by visiting the Department of Labor’s Web site. Also check out Dropout Nation‘s new collection, Teachers Union Money Report, as well as for the collection, How Teachers’ Unions Preserve Influence, for this and previous reports on AFT and NEA spending.

Featured photo courtesy of the Times-Picayune.