The Lies About Influence Randi Tells

RiShawn Biddle
Comments Off on The Lies About Influence Randi Tells

During its 2013-2014 fiscal year, the American Federation of Teachers pent $29.1 million on on political lobbying activities and contributions to what should be like-minded groups. This included $450,000 in donations to the philanthropies controlled by former President Bill Clinton and his wife, Hillary, the likely Democratic presidential nominee. Along with its endorsement of Hillary this past July over the objections of hardcore traditionalists, the union hopes the dollars will lead to gaining critical influence in shaping federal education policy. AFT also poured $80,000 that year into the Congressional Black Caucus Foundation (as well as brought scores of its members to its Annual Legislative Conference that year) in order to convince Members of Congress to gut the No Child Left Behind Act and the accountability provisions that have helped weaken the union’s influence.

At the same time, AFT spent another $29.5 million backing political campaigns throughout the country. This includes dropping $3.3 million into U.S. Senate Democrats’ political action committee, $90o,000 into the PAC controlled by the Democratic Governors Association, and $500,000 into the political action operation of Congressional Democrats. Through its 527 affiliate, AFT Solidarity, the union backed numerous candidates. While AFT’s political campaigning, along with that of NEA, did little to help Democrats win back control of Congress, the union did make sure to give a little money to incumbents such as California Rep. Judy Chu, who will play key roles in determining whether the strong federal role in education embraced by the last four presidents (including Barack Obama) continues.

Meanwhile AFT spent $2 million subsidizing its local in Philadelphia and so-called grassroots organizations in the City of Brotherly Love in order to weaken efforts to expand school choice and overhaul the municipality’s traditional district. This includes a $60,000 contribution to Youth United for Change, $49,120 to ACTION United, and $20,000 to Philadelphia Student Union (whose board includes AFT local leader Anissa Weinraub), who have supported the efforts of AFT and its local. AFT’s spend also included holding three meetings (including two so-called community events) at the ritzy Sheraton Philadelphia Downtown at the cost of $142,129 as well as dropping $272,715 at the rather nice Sonesta Philadelphia hotel to cover “member related expenses”.

The AFT’s efforts in Philadelphia extended into the rest of Pennsylvania since the School District of Philadelphia is controlled by a state-controlled board. The union and its state affiliate poured $732,400 into now-current Gov. Tom Wolf’s successful campaign to unseat Tom Corbett as the Keystone State’s top executive. AFT also subsidized the Keystone State unit, AFT Pennsylvania, and its so-called solidarity fund (or political action fund) to the tune of $499,661 in 2013-2014, $42,074 more than in the previous fiscal year. With Wolf doing AFT’s bidding in Pennsylvania — including replacing one Philadelphia district board member, Bill Green, as chairman in March after the board approved five new charter schools — and the likelihood of Philadelphia city councilmember Jim Kenney succeeding reform-oriented Michael Nutter as mayor, the union can claim the money has been well-spent.

In California, AFT and its affiliate, the California Federation of Teachers, poured $541,680.24 into helping its key ally, Supt. Tom Torlakson, barely hold onto his office against reformer Marshall Tuck. [This doesn’t include the $$967,060.31 CFT’s ballot initiatives PAC spent on various ballot referenda.] At the same time, AFT poured another $618,850 into political campaigns in the Golden State as well as subsidized CFT to the tune of $1.3 million. 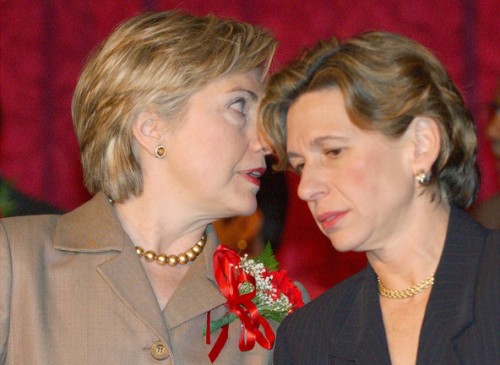 Buying allies and influence: Hillary Clinton (with now-AFT President Randi Weingarten in 2003) is one of many politicians to which the nation’s second-largest teachers’ union has paid to play.

Thanks to those dollars, AFT, along with the National Education Association, have full sway over the Golden State Gov. Jerry Brown and the state legislature, convincing them to essentially gut accountability through the passage of such measures as Assembly Bill 484. Along with NEA, AFT has convinced Torlakson and legislators to fight any effort (including the Vergara v. California lawsuit) to overhaul the state’s byzantine teacher dismissal process, which has made removing laggard and criminally abusive teachers such as now-former Miramonte Elementary School instructor Mark Berndt so difficult that just 100 dismissal hearings were heard between 1996 and 2005, according to the state’s Legislative Analyst’s Office.

Then there is New York, which is the base of influence for AFT thanks to its two units, New York State United Teachers and the United Federation of Teachers, as well as the Progressive coalition and its Unity faction that governs the union and its affiliates. There, AFT poured $12.1 million into NYSUT in order to help the virtually-insolvent affiliate oppose Empire State Gov. Andrew Cuomo’s efforts to expand school choice and require test score growth data to be used in teacher evaluations. The union also subsidized a litany of Astroturf outfits in order to beat back reformers on the ground. This included $50,000 to Alliance for Quality Education, the New York outfit which, along with New York Communities for Change (a recipient of $10,000 in AFT dollars), took aim at former CNN anchor-turned-school reformer Campbell Brown for her efforts to end near-lifetime employment privileges at the heart of the union’s influence and financial sustenance. AFT also poured another $201,450 into political campaigns.

While none of the spending helped AFT and its affiliates stop Cuomo’s efforts — or even keep him from being re-elected last year — it has helped the union cultivate enough support that the governor is effectively backing down from implementation of Common Core reading and math standards the union once strongly backed (and could end up weakening the teacher evaluation plan he got passed this year).

This is just a snapshot of how AFT spends money every year. But a few things are crystal clear: That AFT spends considerable sums (including so-called dollars on so-called representational activities) buying political influence on Capitol Hill, in statehouses, and in city halls. That the union buys prime spots every year at events such as Congressional Black Caucus’ annual conference in order to gain access to political leaders who ultimately shape education policymaking.And that AFT tries (and in many cases, succeeds) in buying favor with activist outfits such as the Schott Foundation for Public Education, knowing that program-oriented dollars in nonprofits often have outsized influence over their direction.

All this spending by AFT has one purpose: Preserve its considerable, albeit declining, influence over American public education. This includes defending near-lifetime employment through tenure and teacher dismissal policies that keep low-quality teachers and even criminally-abusive teachers in classrooms. It includes preserving compulsory dues laws that force teachers to pay into AFT’s coffers regardless of their desire for membership — even when the union and its affiliates deny them any say in directing them. This includes opposing the natural, God-given right of families to provide their children with high-quality education they need and deserve, defending the condemning of kids to special ed ghettos that lead them into despair, and the supporting the overuse of harsh school discipline that puts them on the school-to-prison pipeline. And it involves opposing any accountability for districts and the adults who work within them in order to keep the union’s coffers flush.

So Randi Weingarten can’t complain on Twitter that “Our schools are not for sale”. Nor can she complain about school reformers working all political angles to transform American public education. Because in many cases, her union has already bought them. At the expense of the futures of all of our children. And reformers are doing nothing more than comforting the afflicted kids and families — and afflicting a teachers’ union that has grown comfortable at their expense.

The Misnomer Called "People of Color"