The Damage of Bad Discipline

RiShawn Biddle
Comments Off on The Damage of Bad Discipline

There are numerous problems with the traditional approach school discipline meted out by America’s traditional districts and many charter schools. One of the biggest lies with the longstanding trend by districts to launch police departments as well as bring in law enforcement agencies in the form of so-called school resource officers to police the corridors of school buildings. As the U.S. Department of Justice highlighted earlier this year in its investigation into the Ferguson Police Department, police officers who should only be handling incidents of violence end up using force to address student misbehavior, leading to kids being arrested or detained for minor incidents such as disruptive behavior that should be addressed by teachers and school leaders through better means.

Now as an analysis by Mother Jones reveals this week, the consequences of using police officers to handle school discipline can even lead to children being injured, maimed, and killed inside school buildings. This report, along with the three decades of data on how traditional harsh school discipline damages children educationally, should lead school reformers to join cause with criminal justice reform advocates to end practices that are inhumane as well as ineffective in improving student achievement.

Over the past five years, 28 children have been choked, punched, beaten, tasered, left brain damaged, and even shot to death by rogue cops and school resource officers, according to Mother Jones‘ research. Among the victims: Noe Nino de Rivera, a 17-year-old junior Cedar Creek High School in Bastrop County, Texas, who ended up in a coma for a full year after one officer, Randy McMillan, tasered Rivera after he tried to break up a fight between fellow students. While de Rivera still suffers from the trauma, McMillan avoided criminal indictment and even got a promotion.

Another victim, an unnamed 13-year-old who attended Olmsted Academy North in Louisville, Ky., suffered a brain injury after a police officer, Jonathan Hardin, choked him into unconsciousness; the incident was caught on video. The good news is that Hardin did get fired for this as well as for another injuring of a child at the same school; Hardin also ended up being indicted for his alleged crimes.

Because federal and state governments doesn’t collect much in the way of data on police conduct in traditional districts and other school operations, it is quite likely that far more than 28 children are injured by cops in schools over the past five years.

Huffington Post Editor Rebecca Klein reported this past April that 25 incidents of injuries to children by cops occurred within the past year alone. In the traditional district serving Birmingham, Ala., 110 incidents of pepper-spraying of children by cops have happened since 2006, according to Southern Poverty Law Center attorney Ebony Howard, who is representing eight children injured during one such incident in lawsuit against the district and city’s police department.

Meanwhile the bad behavior of rogue cops in schools extends beyond injury and death. As Philip Matthew Stimson and Adam M. Watkins of Bowling Green State University determined in a study released last year, 61.5 percent of school cops arrested were charged sexual abuse. Seventy-five percent of those cases involved abuse of children in secondary schools. Given that school cops are the primary handlers of school discipline within many districts, the risks of rogue school cops harming children are even higher than ever officially reported (when it is reported at all).

Certainly these and other incidents are stark reminders of the need to overhaul the nation’s criminal justice and law enforcement systems. So does the fact that so many officers who injure children never face criminal charges for their misbehavior. As Dropout Nation reported back in December, rogue cops are as insulated from suffering the consequences of rogue behavior as laggard and criminally-incompetent teachers. Considering that only one-in-three police officers charged with crimes ever serve prison time — and that cops such as Daniel Pantaleo (who murdered Eric Garner last year) are almost never indicted for their misbehavior — it is no surprise that school resource officers and other cops can get away with harming the lives of children under their watch.

But the problem doesn’t lie with police departments alone. The excessive force used by cops and school resource officers in schools results also from districts leveraging criminal and juvenile justice systems to address student behavioral issues instead of addressing the low-quality teaching and curricula from which those issues arise. Districts accounted for three out of every 10 status cases referred to juvenile courts in 2011, according to the U.S. Department of Justice, the second-highest source of referrals after law enforcement agencies. As I reported nine years ago in an editorial series for the Indianapolis Star, districts end up using the courts to address nonviolent (and normal) misbehavior by children that can should be addressed by teachers and school leaders through other means. This includes the case of Donna, a 13-year-old who was sentenced to probation for the schoolkid prank of tossing snow into a teacher’s car.

Exacerbating the problem is the fact that over the past three decades districts, with subsidies from the federal government, have launched their own police departments even though youth crime declined substantially. 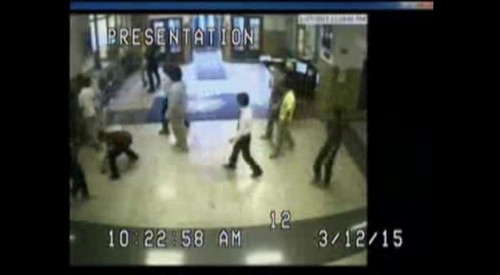 Between 1996 and 2008, the number of districts operating police departments more than doubled (from 117 to 250), according to the U.S. Bureau of Justice Statistics. Thanks largely to the U.S. Department of Defense’s 1033 Program, school district police departments have also become willing participants in the militarization of law enforcement that was on full display in Ferguson and Baltimore after the murders of Michael Brown and Freddie Gray at the hands of rogue cops. While the Obama Administration has stopped providing military weapons to school cops, districts such as Compton Unified in California still arm police with AR-15 rifles and grenades.

Meanwhile the federal Community Oriented Police program, along with fears over the Columbine Massacre and other rare incidents of mass shootings, have increased the presence of police in schools. The number of cops patrolling schoolhouses increased by 38 percent between 1997 and 2007, according to the Bureau of Justice Statistics. Forty percent of districts in America have some form of police officer patrolling schoolhouse grounds, 40 times the levels 40 years ago.

The presence of cops haven’t improved school cultures one bit. As University of Maryland researchers Chongmin Na and Denise Gottfredson determined in a 2011 study, there is little evidence that the presence of school cops lead to decreases in violent incidents or other forms of misbehavior; evidence does show that the presence of school cops did increase the percentage of kids referrals to law enforcement, which, as Na and Gottfredson “suggests that there is indeed a shift toward more formal processing of youthful offending in these schools.” Matthew Theriot of the University of Tennessee determined in a 2009 study that over a three-year period, schools patrolled by cops had five times the level of arrests for disorderly conduct — the legal equivalent of the rather-subjective and arbitrary discipline category of disruptive behavior — than schools without them; the levels remained constant even after adjusting for socioeconomic background.

Regardless of what schools they patrol, school cops do little to improve school cultures. None of this should be shocking. The presence of police transforms school discipline from a matter of addressing underlying causes of child misbehavior to a criminal justice concern. This is because police officers become the primary handlers of school discipline; as Na and Gottsfredson notes, school cops spend 25 percent of their time “counseling students” — even though few receive the kind of training needed to handle child behavioral issues without resorting to arrest and injury. Children, especially those in communities in which police brutality has become all too common, don’t view cops as Officer Friendlys there to help. If anything, because of the nature of law enforcement, the presence of school cops makes already harsh and ineffective school discipline even more damaging and unproductive.

The presence of cops in schools is also ineffective because it allows teachers and school leaders to further abdicate their responsibility to help all children succeed. As it is, out-of-school suspensions and expulsions excuse them from addressing the underlying learning issues — especially struggles with literacy and lack of intense reading remediation — that lead to kids behaving poorly. Thanks to school cops, teachers and school leaders can simply refer children to cops for arrest instead of addressing issues on their own. Especially in schools and districts serving poor and minority children, school cop patrols allow for laggard instructors and principals to believe that the kids in their classrooms are merely the potential lawless, not young people whose potential can and should be nurtured. The teachers and school leaders end up working with police officers to transform schools into virtual jails where childhood is criminalized.

Certainly there are rare situations in which police presence is necessary. But there are almost no reasons why school cops are a constant presence in so many schools. Police officers who are charged with serving schools and districts should be provided high-quality training, especially in child psychology, to ensure that they use force as the last means of resort. Federal and state governments should collect more-comprehensive data on the role of cops in schools; this includes detailed reports on incidents in which cops use force on children.

But the best solution is to shut down school police departments and reduce the number of cops patrolling school grounds so that police only show up for actual incidents of violence endangering children and adults. This should start with Congress and the Obama Administration cutting off funding for the federal COPS program and its school resource officer initiative, an underlying culprit in the growing presence of cops in schools. On this front, school reformers and criminal justice reform advocates (especially those in the Black Lives Matter movement) can come together to help our children.

But reducing the footprint of law enforcement in schools isn’t enough. Three decades of data have long ago shown this: That traditional school discipline used by America’s traditional districts and many charter schools is ineffective in improving student achievement and school cultures. That out-of-school suspensions and expulsions are almost always used to address behavioral issues that have nothing to do with violence or drug use. That traditional discipline practices almost always targets children from poor and minority households. That the use of such practices never address the literacy issues that lead to child misbehavior. That suspensions and expulsions teach law enforcement to regard poor and minority kids as felons and worse. And that traditional school discipline almost always leads to kids dropping out of school into poverty and prison. As hard as folks like Mike Petrilli of the Thomas B. Fordham Institute and Eva Moskowitz of Success Academies may try, no school reformer can morally or intellectually defend these failed and barbaric practices.

On this front, the Obama Administration deserves credit for holding districts accountable for how they mete out such punishment. But it isn’t enough. Embracing alternatives to traditional discipline such as restorative justice is key. Overhauling how districts provide reading instruction and curricula would help more kids struggling with literacy avoid behavioral issues. Both are matters on which reformers and criminal justice reform advocates should work together closely and often.

We can no longer ignore the damaging and unchecked presence of law enforcement in the schools charged with helping all children succeed in school and life. A child should not be choked, brain-damaged, or murdered by a police officer mishandling situations that call for tender loving discipline.

Featured Photo: Noe Nino de Rivera, a high school junior in Texas, is one of many children injured and damaged by school police officers.

The Five Commandments of School Reform