As you would expect, the American Federation of Teachers isn’t just focused on making sure that Philadelphia’s mayor is one who favors its interests. There’s still the Chicago mayoral run-off, in which the union’s favored candidate, Jesus (Chuy) Garcia faces an uphill fight against incumbent Rahm Emanuel for the top municipal job. With so much at stake for the union and its notoriously-bellicose Second City local — which has spent the past few years campaigning for Emanuel’s ouster — it and its affiliates are spending plenty of cash on Garcia’s behalf.

Even before Garcia managed to help deny Emanuel enough votes to win the mayoral race outright, AFT and its affiliates spent heavily on the Cook County commissioner’s behalf. AFT donated $252,600 to Garcia’s campaign, according to the National Institute on Money in State Politics. The donations make the union the second-biggest donor to Garcia’s campaign after the Service Employees International Union’s Indiana healthcare affiliate, which oversees the union’s healthcare organizing in the Midwest.

The Chicago Teachers’ Union, AFT’s Second City local, poured $52,600 through its political action committee into Garcia’s campaign, while the campaign committee formed by the union’s boss, Karen Lewis, tossed in another $16,000; as you know, Lewis was looking to run against the top job before health problems forced her out of the running. The AFT’s Cook County College Teachers’ unit put another $3,000 into Garcia’s campaign.

But once Garcia managed to win second place against Emanuel for the mayoral runoff, AFT took its efforts up a few notches. Within the last month, AFT has directly and indirectly supported Garcia’s quest to unseat Emanuel to the tune of $649,503.20. This includes a massive $300,000 donation to Garcia’s campaign on March 12, along with another  $349,503.20 spent on get-out-the-vote efforts on the challenger’s behalf.

When the AFT bets heavily on a political campaign, you can expect its affiliates to follow right behind.

The union’s Illinois Federation of Teachers donated $50,000 to Garcia’s campaign, while its political action committee of its North Suburban unit put down another $10,000. Considering that CTU got the ball rolling on AFT’s effort to oust Emanuel, its PAC has spent $73,140 on ads touting Garcia’s candidacy and spent another $26,553 on “door-knocking” activities. Even New York State United Teachers, AFT’s virtually-insolvent state affiliate, got in on the action; it gave $10,000 to Garcia’s campaign on Friday, according to a disclosure by Illinois’ board of elections.

Altogether, AFT and its affiliates have spent $809,196.20 this month on Garcia’s quest for the Second City mayoralty. This, of course, doesn’t include the political spending done directly out of the union’s coffers and funded by teachers through dues and agency fees they are often forced to pay regardless of their desire to do so. This will include spending on so-called representational activities such as member e-mails, which end up being political activities because traditional school districts are government operations. Expect AFT to expend even more resources on Garcia’s behalf over the next 10 days. 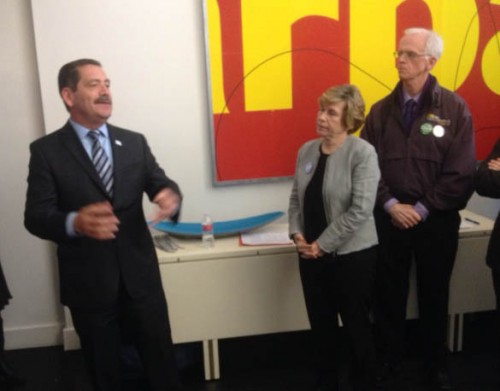 For AFT President Randi Weingarten, a Garcia victory would be a rare bit of good news for her and the union.

It is unlikely that the union’s national overlord, Randi Weingarten, will make an appearance with Garcia in Chicago anytime soon. [She did appear with him in D.C. at a fundraising event.] After all, this is Karen Lewis’ territory and she isn’t one to like having someone else bogarting her faux class warfare schtick. But AFT has likely already thrown some cash to the Rev. Jesse Jackson’s Rainbow PUSH Coalition, which has been a steadfast ally of the union’s efforts to halt the three decades of reform efforts undertaken by Emanuel and predecessor Richard M. Daley. Jackson’s crew has already collected $75,000 from the union over the past two years; he will certainly take more money to shill on behalf of the union at the expense of the Second City’s black children.

The Kenwood Oakland Community Organization, a community grassroots outfit that is advocating for the end of mayoral control of the Second City’s traditional district, will also likely get some AFT dollars in exchange for backing Garcia’s bid; it collected $60,000 from the union in 2013-2014, according to its filing with the U.S. Department of Labor. Other organizations on the ground will likely also get some AFT cash in exchange for doing work.

As you expect, AFT isn’t the only public-sector union player supporting Garcia’s campaign. SEIU and its affiliates throughout the nation have poured plenty into the longtime Chicago politician’s campaign since its state unit moved to back him two weeks ago. The National Education Association, which has no presence in the Second City, is also playing its part; the union reported to Illinois election officials that it plunked down $50,000 into Garcia’s campaign, while its state affiliate chipped in another $25,000.

But AFT is by far the biggest backer of Garcia’s campaign — and stands to yield the greatest benefit if he wins. This includes essentially ending the Emanuel-Daley reform efforts as well as likely placing a moratorium on the expansion of charter schools, the bane of the union’s existence. As in New York City, AFT and CTU would have a pliant mayor with little constituency who must repay his eternal debt to them.

The benefits extend beyond Chicago (as well as Lewis and Jesse Sharkey, who has been running the union in her stead). For Weingarten, whose efforts to stop reform (including attempts to triangulate reformers) have yielded almost no victories, plenty of political losses, numerous episodes of embarrassment, and ire from hardcore traditionalists upset about dwindling influence, Garcia’s win would allow her to claim some kind of success. It could even dissuade big-city Democrats in the rest of the country from undertaking systemic reform in any aggressive way.

Certainly Lewis would deserve ultimate credit; after all, it was her hardcore defensive of failed policies and practices, which have won her acclaim from fellow-travelers across the country, that led Weingarten to stop her triangulation of reformers. But Weingarten is first and foremost a politician — and a crafty one at that — which means she’ll glom on to Lewis’ hard work.

But will any of AFT’s efforts lead to a Garcia victory? This is unlikely. Certainly he could end up bringing out Latino voters who are undercounted in polling. But Garcia only managed to garner 34 percent of the vote against Emanuel’s 45 percent last month even though the other challengers — most-notably scandal-tarred Alderman Bob Fioretti — were weak and had little support. Back in January, CTU itself released a poll from Democrat pollster Celinda Lake’s eponymous firm (a longtime vendor of AFT) that underestimated Emanuel’s strength on Election Day by seven percentage points. With polling outfit Ogden & Fry showing that Emanuel’s lead has increased from 10 percentage points to 16 over the past two weeks, Garcia’s hopes of victory are slim.

There’s also the reality that the AFT’s own presence in this campaign, along with that of CTU and other public-sector unions, helps Emanuel in casting Garcia as little more than someone who will do its bidding. Given the qualified success of Emanuel’s reform efforts — including a study released in January by the University of Chicago’s Consortium on Chicago School Research that shows that 93 percent of kids affected by the shutdown two years ago of 47 half-empty traditional district schools went to better-performing operations — neither Garcia nor AFT can make the case that Emanuel should no longer be the city’s chief executive. Add in the fact that Emanuel’s chief schools boss, Barbara Byrd-Bennett, is no Michelle Rhee, and both Garcia and AFT lose a key foil for their mutual benefit campaign.

As I noted earlier this week in The American Spectator, Emanuel could still lose next month. But the mayor is running hard and scared — and that’s almost always bad for the challenger. As it stands now, AFT may have wasted a lot of money for almost no gain.