There are a few reasons why affiliates of the National Education Association and the American Federation of Teachers continue to cling on to declining influence over education policymaking. One lies with state laws and the U.S. Supreme Court ruling in Abood v. Detroit Board of Education, which allow for the unions to forcibly collect dues and so-called agency fees from teachers regardless of their desire for membership — and then deploy them for explicit and implicit political activities. Then there’s also state laws forcing districts to bargain with NEA and AFT locals; the collective bargaining laws, along with the campaign dollars the two unions deploy, essentially give union bosses a level of influence over districts that supersedes that of the voting public.

Then there is the ability of NEA and AFT locals to get activists among the rank-and-file (along with even principals, especially those in unions) to advocate on their behalf before families and children from within their classrooms. This is especially effective because there are still many parents who trust what their teachers tell them, and thus, can easily end up working on behalf of NEA and AFT locals unless they understand the politics at play. Which is what teachers’ union bosses count on. While districts occasionally have rules in place to restrict such politicking, the reality is that teachers’ union bosses (including so-called chapter leaders working part-time in schools while serving as classroom teachers) can effectively work around those rules to engage in the kind of advocacy that would get district bureaucrats in hot water.

So no one should be surprised that the AFT’s Big Apple local, the United Federation of Teachers, has allegedly been caught engaging in such activity as part of its effort against moves by Gov. Andrew Cuomo and his school reform allies to expand school choice and transform the Empire State’s public education systems.

As detailed today by New York City Parents Union President Mona Davids in an e-mail to Big Apple Chancellor Carmen Fariña, Eugenia Montalvo, the principal of one school, P.S. 106 in the Bronx section of the city, took time yesterday during her morning announcements to read a UFT flier asking children and families to join teachers and members of the American Federation of State County and  Municipal Employees’ District 37 in wearing red this coming Friday and every Friday thereafter in protest of Cuomo’s reform efforts. This, by the way, would clash with the elementary school’s uniform colors of blue and white. 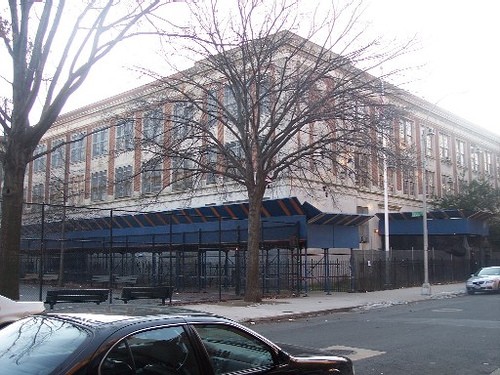 Lobbying by NEA and AFT bosses in schools such as P.S. 106 in New York City’s Bronx borough is often a regular occurrence.

Given that Davids and other parents (along with Campbell Brown’s Partnership for Educational Justice) are tangling with the AFT local in court over ending New York State’s near-lifetime employment and teacher dismissal laws, this politicking didn’t exactly go over well with her. That such a move also violates the Big Apple’s rules on politicking in school buildings also made Montalvo’s move a problem. When Davids asked Montalvo why she read the flyer, the principal said she did it at the request of the UFT’s chapter leader on campus. Today, the chapter leader, Penny Block, expressed shock and dismay that Davids had the temerity to complain about this advocacy.

Certainly the politicking is bad enough given that UFT activists aren’t exactly giving all sides of the story. But it is even worse in the case of P.S. 106, because it isn’t exactly a high-quality school. Just 20 percent of students met New York State’s standards in reading on the most-recent round of exams; this is ten percentage points than the average for the Big Apple as a whole. Politicking against reform is the last thing either Montalvo or Block should be doing.

Davids has since demanded Fariña to issue a warning to principals and teachers reminding them to not advocate politically in classrooms. Not that such a move will likely work. For one, Fariña and her boss, Mayor Bill de Blasio, have long ago proven that they will do UFT’s bidding whenever possible. Especially since both the mayor and the union have joined common cause in opposing any kind of systemic reform that benefits the children the district serves.

Secondly, even if Fariña issues the order, UFT’s mandarins can find other ways of politicking within classrooms. [Update on February 6: As Carl Campanile of the New York Post reports today, UFT is also lobbying parents on the district’s education councils to join their effort.] Of course, this is fine with the union so long as rank-and-file members are doing its bidding. Not so much when they go astray, as some teachers did last September when they wore NYPD t-shirts in solidarity with officers and their union, the Patrolman’s Benevolent Association against the UFT’s partnership with Rev. Al Sharpton’s National Action Network against police brutality.

What reformers and families can do is what Davids has done: Publicize these acts of politicking — and remind parents that they must be skeptical of anything told to them regarding education policy by anyone within districts and schools. The movement must also work harder on the ground in communities, especially with the churches, community organizations, Parent Power groups, and impromptu leaders that serve families, to neutralize the advantage exploited by UFT and other locals.