You shouldn’t be surprised that American Enterprise Institute education czar Rick Hess and Michael Petrilli of the Thomas B. Fordham Institute took aim at centrist and progressive Democratic reformers such as Stand For Children’s Jonah Edelman (along with others in the movement) today on the pages of National Review for their opposition to the efforts of House Education and the Workforce Committee Chairman John Kline and Senate counterpart Lamar Alexander to eviscerate the No Child Left Behind Act and its sensible accountability provisions. Nor should you be shocked that Hess and Petrilli use a “shopworn parlor trick”(as they would call it) that anyone who opposes the effort are engaging in race-baiting by arguing that rolling back the federal role in advancing systemic reform — including requiring states and districts to account for how they are improving achievement for children from poor and minority backgrounds — will hurt our most-vulnerable.

After all, both men have long ago for various reasons (including pressure from a new generation of movement conservative activists unconcerned with education issues as well as donors to their respective outfits) to serve as two-man Amen corner for Kline, Alexander and fellow congressional Republicans looking to scale back the much-needed federal role in advancing systemic reform. Petrilli, in particular, revealed his allegiances three years ago in a virtual Valentine praising Alexander’s plan for reauthorizing No Child even as Dropout Nation and others detailed how it would do little more than go back to the bald old days of the old Elementary and Secondary Education Act,when states spend federal money as freely as they so choose without any accountability. [The very fact that Hess and Petrilli stand against the federal government holding states to account for the subsidies they receive, an important principle of modern movement conservatism since the days of Reagan, shows that they are as much fair-weather ideological adherents as they are erstwhile reformers.]

Nor should you should be surprised that their critique actually neglected to make any case whatsoever for their argument that No Child and other federal efforts on matters such as ending the overuse of harsh school discipline have caused “very real harm”. This isn’t shocking because this is an argument they have made numerous times in various ways (and even, on occasion, either misusing data as well as drawing conclusions that don’t fit the evidence they use) that have been proven false by their colleagues (including yours truly).

Hess and Petrilli can’t argue that No Child hasn’t spurred an array of reforms that have helped more children, especially those black and brown, receive high-quality teaching and curricula. This includes a seven percentage point decline in the number of fourth-graders reading Below Basic between 2002 and 2013 (according to the National Assessment of Educational Progress) — and especially a 10 percentage point decline in the number of functionally-illiterate black fourth-graders. With a four percentage point increase in the number of fourth-graders reading at Proficient and Advanced levels (along with those kids continuing scale score increases similar to those by struggling peers), they also can’t argue that No Child’s focus on stemming achieving gaps have short high-achieving children.

When you consider the three-fold increase in the percentage of high school seniors graduating after taking at least one Advanced Placement exam between 2003 and 2013, as well as the expansion of public charter schools and other forms of choice, there is no way to argue that the aggressive federal role in advancing systemic reform hasn’t been on balance a net positive for children.

Hess and Petrilli also can’t prove their argument that No Child and other federal policies have led to schools being hamstrung by “stifling, rule-driven culture”. The nation’s high-quality public charter schools, including those operated by KIPP, Green Dot, MATCH, and Uncommon Schools, prove lie to that contention, as do the successful efforts of reformers such as former New York City Chancellor Joel Klein and Boston’s Tom Payzant in overhauling traditional districts. They can’t even prove the corollary argument that they could proffer (and has been offered up by Petrilli) that curricula has been narrowed (and classes outside of reading, math, and science have been crowded out) because of the expansion of standardized testing by states and districts prompted only in part by No Child’s accountability provisions.

If anything, what Hess and Petrilli loathe to admit is that No Child and other federal policymaking over the last decade has essentially reaffirmed the role of states as the overseers of public education. No Child, for example, allows states to figure out their own ways to provide high-quality education, especially to poor and minority children as well as those in the nation’s special ed ghettos; if anything, as I noted two years ago, the very flexibility in the law is the key reason why its success was limited. The Obama Administration’s Race to the Top initiative merely required states to compete for additional federal funding by implementing reforms such as overhauling teacher evaluations; that some were already making such moves even before the first round of the competitive grant effort began further exposes the fallacy of the Hess-Petrilli position.

Meanwhile Hess’ and Petrilli’s can’t even effectively argue against the contention of Edelman and other reformers that a strong federal role in education policymaking is key to holding states responsible for providing all children with high-quality education. This is because history and data have long ago proven that without strong federal action, state governments will rarely do the right thing by poor and minority children. Especially when it comes to black children and communities, who along with those from American Indian and Alaska Native backgrounds, have been historically condemned to the lowest expectations by American public education. As Ilya Somin of the libertarian Cato Institute pointed out last year, the underlying reality is that without federal intervention, states would have continued policies such as slavery and state-sanctioned segregation within American public education. 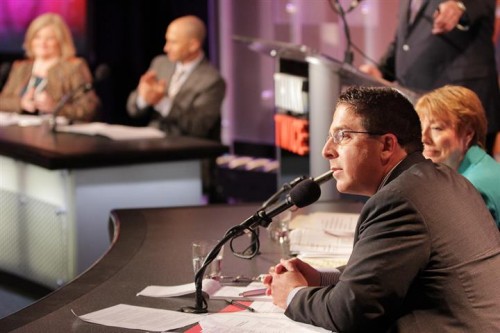 When it comes to poor and minority children, Rick Hess has never shown much concern.

What Hess and Petrilli fail to acknowledge that the federal government actually serves an important role in spreading reform efforts initiated by governors and legislators in the few states that initially undertake them. It was the Reagan Administration, through its release of A Nation at Risk  in 1983, that coaxed other states to undertake the initial efforts at addressing teacher quality and curricula first undertaken by southern state governors and chambers of commerce. Without the passage of Improving America’s Schools Act in 1994 and No Child eight years later, the steps taken by Florida and Texas to launch accountability regimes would have never been implemented by other states.

Meanwhile Hess and Petrilli fail to admit this important reality: That the federal government is constitutionally charged with protecting the civil rights of everyone, especially children from poor and minority backgrounds who are often subjected to educational abuse and neglect by traditional districts and states. This includes addressing Zip Code Education policies such as zoned schooling, restrictions on the expansion of charter schools, and limits on accessing college-preparatory courses that prevent children and families from accessing high-quality education. It also includes stepping in to address how far too many districts and charters are meting out-of-school suspensions to black children at higher levels than white peers — and often for minor behavioral offenses for which white peers would only receive lower level penalties.

Addressing how black and poor children are often shortchanged educationally by districts (often with the blessing of states) is the main reason why the original Elementary and Secondary Act (along with other civil rights legislation) was passed 59 years ago. It is also why No Child, the latest version of ESEA, was passed 36 years later. For Hess and Petrilli to deny the federal government’s important role on the most-important long-term civil rights issue of this time is to demonstrate stunning depths of historical illiteracy, intellectually unseriousness, and moral ignorance.

But no one should be surprised that Hess and Petrilli, men who claim themselves to be school reformers, penned this jeremiad. After all, both men have shown long ago that they have little concern with building brighter futures for the poor and minority children who have been damaged the most by the nation’s education crisis (and its roots in the racialism that is the nation’s Original Sin).

These days, Hess takes the position that school reformers are overly concerned with addressing the needs of poor and minority children. He began arguing this four years ago when he declared that his fellow school reformers were gripped by an “achievement gap mania” because they dared to actually focus policy efforts on helping poor and minority kids receive high-quality education. Despite evidence supports this focus, along with that showing that stemming achievement gaps helps white kids from both poor households (especially in rural communities), Hess hasn’t changed his stance. In fact, he has doubled down on this thinking. Last year, he argued on the pages of NR that efforts to expand school choice does little more than allow poor and minority families to evade personal responsibility for properly raising their children. And as seen late last year in discussions over the role of school reformers in addressing matters such as the aftermath of Ferguson and the Eric Garner verdict, Hess’ lack of concern for poor and minority kids extends beyond discussions about systemic reform.

Meanwhile Petrilli has often been deliberately ignorant about the adverse consequences of policies he defends– including traditional school discipline, ability-tracking, and even the idea that only some kids merit college-preparatory learning — on the futures of poor and minority kids. This has often been driven by stubborn adherence to theories unsupported by data. For example, Petrilli’s argument against the Obama Administration’s effort to reduce use of harsh school discipline is driven by a belief that out-of-school suspensions are meted out more-often to minority children than white peers because of “pathologies” such as single motherhood and poverty. This in spite of three decades of evidence from researchers, including University of Pittsburgh’s John Wallace, that black children are more-likely than white peers to be given harsher penalties for even the most minor offenses.

Such sophistry would be less-disconcerting if it came from the likes of once-respectable education historian Diane Ravitch (whose myopia on race has been on display since chastised black parents in the Ocean Hill-Brownsville community in The Great School Wars: A history of New York City schools, for their efforts to hold schools and (mostly-white) teachers accountable for student achievement. But Hess and Petrilli are supposed to be reformers, who fully understand that helping poor and minority children succeed (along with their white and middle class peers) is at the heart of the movement’s mission. For them to accuse their peers of race-baiting because they have raised honest concerns about rolling back No Child and the federal role makes you wonder if they believe themselves to be reformers at all.

Perhaps Hess and Petrilli should deal seriously with the concerns raised by their fellow reformers instead of engaging in old-school sophistry.

More on Hess' and Petrilli's Claptrap

Reformers Must Focus on Statehouses