Silence of Reformers on Ferguson is Deafening

Your editor is finishing up another report on the National Education Association’s spending during its last fiscal year. But that can wait for a moment. Now is the time to have a conversation about the silence of far too many school reformers — and the thoughtless words of one in particular — about the aftermath of Monday’s decision by a St. Louis County grand jury to not indict Ferguson Police Officer Darren Wilson for the slaying of Michael Brown.

As you already know, Dropout Nation ran a piece yesterday on how reformers can use the aftermath of Ferguson as an opportunity to address the overuse of harsh school discipline on our children, especially our young black men. This weekend, there will also be a podcast on how reformers and grassroots communities must come together to take on the challenges wrought by decades of systemic failure of American public education within poor and minority communities. Simply put, this publication is undertaking its mission, one to which all school reformers should be committed at all times and all moments: Building brighter futures for all children. Challenging systems that harm the futures of all of our sons, daughters, nephews, nieces, and cousins. Stand along with communities to bend the arc of history toward economic and social progress. And create cultures of genius in which all of our kids are provided the high-quality education they need and deserve.

If you read Dropout Nation on a daily basis, you know this already. But in case you don’t, this isn’t the first time we tackled Ferguson. Back in August and September, after Wilson’s callous slaying of Brown led to months of protests in and out of Missouri, this publication ran pieces on how the Ferguson-Florissant School District exemplified the failed policies and practices endemic in American public education. This included focusing on how the district failed to provide all kids with college-preparatory curricula, a Dropout Nation Podcast on how we must use the events in Ferguson to save young black men from the economic and social abyss, and a report on how Ferguson-Florissant was doing worse on behalf of black children than the notoriously-woeful St. Louis district nearby. Connecticut Parents Union President Gwen Samuel, a Contributing Editor to this publication, even documented her own son’s targeting by law enforcement in her hometown.

So if this humble magazine can sharply tackle the educational and social issues that are contributing factors to what happened that fateful day three months ago, why can’t reformers — especially those in the Beltway — do the same? More importantly, how can the school reform movement talk about addressing equity in public education while remaining silent about Ferguson? Why is it that Thomas B. Fordham Institute President Michael Petrilli tweeting about a radio broadcast on a report the think tank has written instead of discussing what reformers can do to address the role districts play in festering suburban poverty? [Update: Fordham finally put up a podcast in which they discuss Ferguson.] How come reform outfits such as 50 CAN and the Foundation for Excellence in Education, along with school choice advocates such as Jay P. Greene and the Milton and Rose D. Friedman Foundation have issued no statement rallying reformers to expand high-quality options so that poor and minority families in Ferguson and elsewhere can escape failing traditional district schools? Why is it that only Teach For America, along with a few reformers such as Students for Education Reform cofounder Catharine Bellinger,and Teached Director Kelly Amis, as well as African-Americans in the movement, have behaved admirably by calling Brown’s slaying the tragedy and rallying call for systemic reform of education and criminal justice that it is?

Certainly there are so-called reformers who don’t think that Ferguson is a matter about which they should be concerned. This was already expressed by American Enterprise Institute education czar Rick Hess in his response to criticism from Shree Chauahan that Ferguson was “not his beat”. They also likely share Hess’ misguided and misinformed perspective that Wilson was found “innocent” by the grand jury, and ignore a few inconvenient facts, such as the reality that Missouri’s state law and U.S. Supreme Court rulings granting wide leeway to law enforcement in the event of officer-involved shootings makes often make it impossible to indict police officers for brutality and murder; Wilson wasn’t found not guilty of a crime, just wasn’t indicted, which given that 83 percent of 98 homicides by officers led to charges of murder or manslaughter, according to a recent study from Bowling Green State University, makes him rather fortunate. [That the entire investigation into Brown’s murder was almost-deliberately bungled by the Ferguson Police Department from day one — including not taking a written statement from Wilson as well allowing him to wash off evidence, also makes any claims of innocence suspect.] And you can imagine that some supposed reformers prefer, as Hess does, to focus more on the few incidents of bad behavior from those on the streets of the St. Louis suburb than on the steadfast protest of residents and political leaders such Antonio French and Maria Chapelle-Nadal. 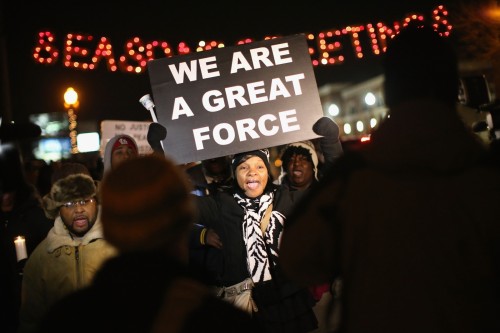 Of course, dear readers, Hess’ response isn’t shocking. After all, he has long ago displayed his lack of concern for the futures of poor and minority children. From his arguments three years ago arguing that the focus on stemming achievement gaps was some form of “mania”, to the failure to include Parent Power activists such as Samuel and Mona Davids of the New York City Parents Union on forums held at AEI’s swank headquarters, to his complaint last year that advancing systemic reform and school choice for poor and minority families was aiding and abetting bad parenting, Hess’ policy orientation has been long ago clear. And sadly, there are some in the movement who share this callous lack of concern for all of children.

But what explains the silence of the vast majority of reformers who advocate steadfastly in word and deed at every other time for providing all kids high-quality education? Cauhan raised this question in a way today. It isn’t a new one. Your editor called out reformers back in August on their silence immediately after Brown’s slaying as did former National Alliance for Public Charter Schools President Peter C. Groff. This is a question that shouldn’t have to be asked in the first place.

Why? Because the school reform movement should always be out front on all the issues that are impacted by the nation’s education crisis. Because the policies and practices that condemn the academic futures of our children end up spilling into our streets. Because you cannot proclaim yourself to be a champion for all kids if you are not championing them at all times. Because the movement cannot sustain its efforts without support from communities who are also dealing with the other consequences of low-quality education. Because as any adult over 30 knows, you can only reach people when your care and consideration for the matters of their greatest concern. Because reformers, like all Americans, cannot ignore the racialism, state-sanctioned and otherwise, that is the nation’s Original Sin. And because the young man at the center of this tragedy was a human being, who looks like the children whose futures we are working to save, who had a mother and father like every child, and whose death has yielded grief that deserve our attention as both children of God as well as members of the family of man.

To be a school reformer is to look at all the issues that happen in the lives of our kids, understand how American public education impacts those matters adversely, and champion solutions that can transform the schools and other institutions at the center of the lives of children, their families, and the communities in which they live. When reformers don’t live up to their obligations, as both members of a moral movement for bettering the lives of children as well as human beings, they are doing disservice to the mission. The silence of so many reformers on Ferguson is shameful, unacceptable even. And it must stop.