Your editor was too busy putting together this week’s Dropout Nation analysis on overuse of harsh school discipline in the D.C. metro area to pay much attention to the announcements made by a group of education associations, old-school civil rights, and advocacy groups led by the National Education Association and the American Federation of Teachers calling for a “new social compact” on accountability.

Of course, that wasn’t the only reason. There’s the fact that the signatories include the National School Board Association and the National Association of Secondary School Principals, two groups who represent the districts that oppose any form of robust accountability. The fact that many of the other signatories are longtime vassals of the NEA and AFT — including the Schott Foundation for Public Education and its Opportunity to Learn campaign (which collected $180,000 from the AFT in 2013-2014), and Barnett Berry’s Center for Teaching Quality (a rival of the reform-oriented National Council on Teacher Quality which collected $310,000 from the NEA last year) — also makes the proposals suspect. Given their dependence on NEA and AFT money — and that both unions are pushing their vassals to embrace their so-called social justice efforts — it wouldn’t be shocking if the outfits merely signed what the two unions placed before them.

But then, I took some time today and read over their proposition — and simply shook my head. Why? Because, as you would expect, what the group is calling for is nothing more than a return to the bad old days before the passage of the No Child Left Behind Act that did little more than condemn far too many children to the educational, economic, and social abyss.

So what will make up this accountability system, you ask? The NEA-AFT coalition isn’t exactly up front about this. They talk about “a process of reflection, judgement and action” using “multiple sources of evidence” to evaluate teacher performance. They also talk about a “school quality review” conducted by “expert educators” to determine whether schools are actually providing high-quality education for all children, something similar to the school inspection process that Education Sector (now part of the American Institutes for Research) was touting as an alternative to AYP a few years ago. And they mention using “measures of socio-economic” learning in accountability too. Again, whatever that means.

But there are plenty of problems with what the NEA-AFT coalition is proposing. Let’s start with the fact that they offer not one concrete proposal for how they would implement such a “shared accountability” model. This shouldn’t be shocking. For one, such an approach would mean developing the kind of comprehensive data systems that many of their fellow traditionalists would oppose; it would also mean private-sector outfits such as the now-defunct InBloom (against which AFT President Randi Weingarten railed last year) would also have to play a part in designing and operating them.

As for “multiple sources of evidence” to measure teacher performance”? That only works if all such data were effective in measuring what matters most: How well teachers are doing in improving student achievement. After two decades of research, we know that even the most-rigorous classroom observations are far less accurate in measuring teacher impact on student achievement than either value-added analysis of test score growth data or even student surveys such as the Tripod system developed by Cambridge Education and Harvard’s Ronald Ferguson.

More importantly, observations are inherently biased because they are based on subjective determinations by school leaders and others who are prone to think that their approach to teaching is superior to anyone else’s (even if teachers being evaluated have demonstrated that they improve student achievement as measured by test score growth). Peer reviews, the usual alternative touted by traditionalists, are also flawed in practice for the same reasons. Ultimately, you need longitudinal test score growth data to actually measure improvements in student achievement that cannot be observed with the naked eye.

Meanwhile on the school accountability front, the NEA-AFT coalition offer few suggestions outside of attendance data, school discipline data, graduation rate data, and percentages of kids promoted from one grade to another. Certainly such data is critical. Graduation rates (along with test score growth data) is a critical component of No Child’s AYP system, while any overhaul of No Child should include using school discipline data along with chronic truancy rates (ideally, based on 10 or more days of unexcused absence, as used in Indiana) as a component of accountability. But those data-sets still don’t measure how well schools (and ultimately, districts and other school operators) are improving student achievement. Again, you need student test score growth data to hold schools (and those within them) accountable. 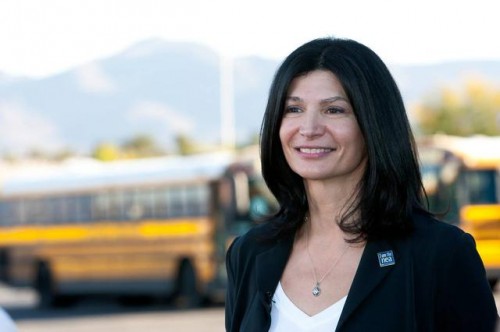 No one should be shocked that NEA President Lily Eskelsen Garcia and her traditionalist allies would come up with a rollback of accountability.

As for the school inspection system the NEA-AFT coalition touts? It has numerous flaws. As I noted two years ago in reviewing Education Sector’s proposal, even the most-comprehensive site review will be just as inaccurate (and burdened with biases) in measuring how well schools are serving kids as observations and peer reviews. That site reviews can’t measure quality of teaching, the most-critical component in how schools improve student achievement, also makes the proposal unready for prime time. The fact that there is no component for holding schools and districts accountable for improving achievement for all children — especially those from poor and minority communities — essentially makes the school inspection idea not ready for prime time.

Simply put, the NEA-AFT proposal is just plain shoddy. It lacks concrete specifics or any recommendations that are actually workable in practice. It doesn’t merit any serious consideration. But this isn’t shocking. After all, a serious plan would actually include embracing the very effective tools of accountability that traditionalists (especially the Big Two teachers’ unions) disdain the most.

First, they would have to embrace the comprehensive use of test score growth data (through Value-Added Measurement) — and ultimately, the standardized tests they loathe — in evaluating districts, teachers, and school leaders. This also means annual testing in every grade — instead of grade-span testing they prefer — in order to longitudinally measure their academic (and ultimately, economic and social) progress of all children. Three decades of research have shown that Value-Added is the best tool for evaluating the performance districts, schools, and teachers alike. As Tom Kane of Bill & Melinda Gates Foundation notes this week in a piece for the Brookings Institution, there is “substantial evidence” Value-Added (along with the standardized tests that underlie the analysis) captures the “causal effects” of teachers and schools. There can be no retreat on this most-important tool for accountability as well as for helping diagnose learning issues.

Secondly, they would have to really accept measuring the performance of districts and those who work in schools in improving achievement for poor and minority children (and no merely talk about disaggregation of “multiple measures”.) In short, the very subgroup accountability at the heart of No Child’s AYP provision. Thanks to AYP, traditional districts — especially those in suburbia — have been exposed for failing to provide high-quality teaching, curricula, and school cultures to poor and minority children (as well as those condemned to the nation’s special ed ghettos). Sure, AYP should be amended to include additional data such as school discipline rates, percentages of middle-schoolers and high school students provided Algebra 1 and other college-preparatory courses, and actual chronic truancy rates (instead of the current approach to calculating attendance that ignores this issue). But test score data — including growth measured in Value-Added as well as  proficiency levels — must be the most-important dataset of all.

Thirdly, they would have to admit that the nation’s education crisis has little to do with the Poverty Myths they promote than with the policies and practices within American public education that they have long-defended. From the rationing of high-quality education through ability-tracking, to the condemning of children (especially young black, Latino, and poor white men) to special ed ghettos, to near-lifetime employment and dismissal policies that make it difficult to weed out laggard teachers (and promote high-quality colleagues), to the protection of university schools of education that fail to prepare teachers to help kids succeed, the policies that the NEA and AFT (along with NSBA and NASSP) have long supported are indefensible, even immoral.

Finally, they would have to admit that the approach to accountability put in place by No Child works. It means admitting that No Child’s accountability provision has spurred reforms that have led to 256,795 fewer fourth-graders struggling with functional illiteracy in 2013 than a decade ago. This would also require them to admit that their “social compact” is little more than a step back to the bad old days before No Child’s passage, when states, districts, teachers, and school leaders were allowed to ignore the needs of poor and minority children with impunity.

Yet the NEA-AFT coalition (as well as the old-school civil rights groups and advocacy outfits participating in this shoddy proposal) aren’t the only who deserve shame.

Over the past month, other coalitions, including one led by the Council of Chief State School Officers and the Council of the Great City Schools, have also offered up accountability and testing plans — all driven by political backlash over Common Core implementation — that lack specificity, and thus, will do little more than let states and districts off the hook for their failures to provide all children, especially the most-vulnerable, with high-quality education. While the proposals may be well-meaning and may be worthwhile in theory, all of them do nothing to help poor and minority children, much less white and middle-class kids in suburbia.

There’s also the Obama Administration’s No Child waiver gambit, which has allowed 43 states and the District of Columbia to ditch AYP for accountability systems that have allowed districts and schools to proclaim themselves as high-performing even when they have not reduced wide achievement gaps, especially between white and black children. One can blame the Obama Administration’s retreat on accountability for the backsliding taking place in Texas, California, and even Florida within the past year.

Then there are proposals for reauthorizing No Child that have been floated by congressional leaders such as House Education and the Workforce Committee Chairman John Kline, Senate counterpart Tom Harkin, and his likely successor, Lamar Alexander. All of them, in reality, would eviscerate the accountability provisions of the law altogether. Kline’s proposal, contained in the stalled second version of the Student Success Act, goes even further by waiving a white flag on the strong (and necessary) federal role in advancing reform. Two other proposals, both backed by the NEA and AFT, would do nearly the same by ending annual standardized testing.

Meanwhile there are reformers (including Common Core supporters and school choice activists) who want to backslide on subgroup accountability. Certainly they believe they want the best for all children. But their backsliding on AYP is in substance no different than that being advocated by the NEA-AFT coalition. In the process, they have forgotten their moral and political obligations as school reformers to the most-vulnerable children, the kids black and brown and poor and American Indian, who have been subjected to nearly two centuries of what can be best called educational genocide.

So your editor can’t get too annoyed with the NEA-AFT coalition. Their actions have long ago shown that they are far more-concerned about defending education traditionalism than the futures of our children. So expecting better from them makes no sense. But what excuse do reformers have? Not one. Not one at all.