The Shame of the Beltway Three Thoughts

The Shame of the Beltway

RiShawn Biddle
2 Comments on The Shame of the Beltway

You would think traditional districts and other school operators in Washington, D.C., and the surrounding metropolitan area would be especially focused on doing well for poor and minority children. After all, the region is home to some of the nation’s most financially-prosperous school districts, as well as the backyard of Beltway policy wonks and activists who are among the most-prominent players in the school reform movement. There’s even the fact the D.C. region is home to the nation’s Big Two teachers’ unions, which should be concerned about the success of the districts that serve the kids of staffers to whom they pay six-figure sums.

Yet as a Dropout Nation analysis of college-preparatory data for 10 school operators shows,, this isn’t even close to reality. Far too many black and Latino children are denied the higher ed-preparatory learning they need and deserve.

Raising the question about how well D.C.-area districts are doing for kids, especially those from poor and minority backgrounds, is the Thomas B. Fordham Institute’s effort to track spending patterns for districts and other school operators in the region. The School Spending Explorer, along with Fordham’s analysis on how badly many districts are doing in providing dollars to schools serving the poorest kids, has spurred plenty of chatter among wonks and others. And for that alone, the conservative reform think tank and its president, Michael Petrilli, deserve praise.

But as Ulrich Boser of the Center for American Progress and other researchers have long-ago confirmed, there is almost no correlation between spending levels and performance in improving student achievement. Just as importantly, a district can spend plenty on serving kids from poor and minority backgrounds and still fail to provide them with high-quality education. This is because most school funding is spent on teacher salaries and benefits (including efforts to shore up virtually-insolvent pensions). As a result, dollars actually follow instructors, not children or even programs.

One question that Fordham failed to answer (and couldn’t, given the limited scope of its research) is how well D.C. area-districts are doing in the one area of systemic reform that matters most: Preparing children, especially those from black and Latino households, for success in the traditional colleges, technical schools, and apprenticeships that make up American higher education, as well as in careers after children leave school. This includes providing kids with Algebra 1 in middle school (a key course for helping them take on tougher math courses in high school), as well as Algebra 2 and advanced math courses such as trigonometry and statistics (the latter two being gateways to high-paying blue- and white-collar careers).

This matters because the achievement gap is as much a result of the denial of college-preparatory learning opportunities to poor and minority schools — often by teachers and guidance counselors who serve as gatekeepers to such programs (including gifted-and-talented courses) — as it is a result of the failure of districts to address illiteracy in the early grades. Opportunity gaps, especially those perpetuated by American public education, lead to achievement gaps that condemn poor and minority kids to the economic and social abyss.

To shed light on this matter, Dropout Nation culled data on course-providing in 2011-2012 (the latest year available) from the U.S. Department of Education’s Civil Rights Database. Your editor ultimately focused on 10 school operators in the immediate metropolitan area. This includes D.C. Public Schools; Montgomery County and Prince George’s County in Maryland; and Arlington, Alexandria, Fairfax County, Falls Church, Loudoun County, and Prince William County in Virginia. [Because of data collection issues, DN excluded Anne Arundel County, Md., which is increasingly as much a suburb of D.C., as it is a branch of the Baltimore metro area from the list.] The D.C. branch of the Knowledge is Power Program charter school chain was also included, partly because it serves as many students as many traditional districts in the region, as well as because of its specific college-preparatory focus.

What Dropout Nation found was shocking, but not close to surprising.

Few districts provide black and Latino children with Algebra 1: On average, 27 percent of black middle-school students in the D.C. area and 21 percent of Latino peers took Algebra 1 in 2011-2012. That’s lower than the 37 percent average for white middle-schoolers, and 42 percent for Asian schoolmates in the 10 districts and school operators surveyed. On average, 10 percent fewer black kids take Algebra 1 than their white peers, while the gap between Latino and white kids is 16 percent.

The interesting news: Middle-school children of all backgrounds attending Alexandria’s traditional district have a far-better chance of being provided introductory algebra than kids in other districts. KIPP does the best among all school operators at providing Algebra 1 to black children, with 45.3 percent of its middle-schoolers taking the college preparatory course. The worst: Prince William County, Va., where a mere 12 percent of black students — who make up the vast majority of kids attending its schools — took introductory algebra. But while Prince William is dreadful on that score, few districts do better. Arlington, Fairfax, Montgomery County, and Prince George’s provide Algebra 1 to fewer than three out of every 10 black middle-schoolers.

As for Latino kids: D.C. Public Schools did the best at providing Algebra 1 to those children, with 36.9 percent of Latino middle-schoolers taking the course. Prince George’s did the worst, with a mere one-in-10 Latino middle-schoolers taking the college prep course. [KIPP doesn’t get mentioned because it didn’t serve any Latino kids in 2011-2012.] But not one district in the D.C. metro area provided more than 37 percent of Latino students with introductory algebra. This includes Montgomery County, Md., where Latino kids make up a larger percentage of the student population (25.2 percent) than any of the districts on the list, and Fairfax County (which has the largest Latino student population of any of the schools on the list).

No district does well at providing kids with Algebra 2: On average, just 16 percent of high schoolers attending the 10 Beltway-area districts surveyed were provided Algebra 2, a critical course in helping them undertake tougher coursework in higher education. This included 18 percent of white high school students, 17.2 percent of black schoolmates, and 16 percent of Asian peers. Considering the necessity of Algebra 2 for success in college completion (and avoiding remedial math courses that condemn so many students to dropping out with crippling debt), the fact that districts are doing poorly in providing level two algebra for all kids is shocking.

Most districts fail to provide advanced math to minority kids: Trigonometry is critical for kids who want to get into high-paying blue-collar jobs such as welding, while statistics is an increasingly important skill for those who want to get into marketing and other white-collar careers.  Both courses, along with other forms of advanced math, would be especially helpful for black and Latino children who often come from low-income households. Yet these are the courses (outside of calculus) they are the least likely to be able to access.

But Alexandria proves to be the worst for both black and Latino children, with less than five percent of them being provided trigonometry, statistics, and other higher-level math. But Alexandria isn’t the only tony district who falls short in this category: Fairfax and Montgomery County fail to provide advanced math to more than 16.4 percent of either black or Latino high schoolers, while providing those courses to as many as 35 percent of white and Asian peers.

As with spending data, these three data points alone don’t provide a full picture of the performance of traditional districts and other operators in the D.C. area in providing all kids with college-preparatory curricula and high-quality education. But the data does illustrate what other data has revealed for some time. 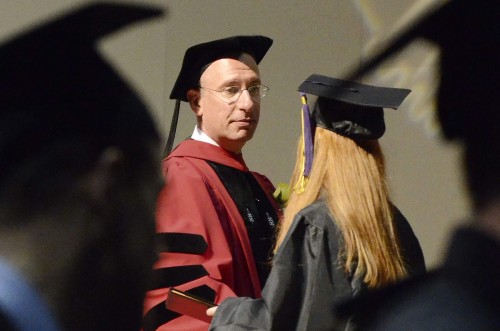 Montgomery County Supt. Joshua Starr has plenty of not so noble reasons to call for moratoriums on testing…

The first? That black and Latino children are poorly-served by traditional districts in the D.C. area. This is especially true for black and Latino families in Fairfax County and Montgomery County, both of which are still resting on their (mostly unearned) reputations for providing high-quality education. When you look at other college-preparatory data — including percentages of minority kids provided with access to Advance Placement courses — as well as revelations that Fairfax County was inflating its test-score performance by steering poor and minority kids into taking less-demanding Virginia assessments geared for special-ed students, it is clear that neither district is doing well by our most-vulnerable. Dropout Nation‘s analysis also adds to the evidence there are plenty of not-so-noble reasons why Montgomery County Supt. Joshua Starr is beating the drum for a three-year moratorium on standardized testing aligned with Common Core reading and math standards,

For black and Latino families, especially those emerging into the middle class, who have flocked to Fairfax and Montgomery, the reputations of both reputations for providing high-quality education have proven to be mere smoke and mirrors. Even worse, as sociologist Karyn Lacey revealed in Blue-Chip Black, her study of black life in the D.C. suburbs, families have found themselves fighting hard against school leaders and teachers unwilling to help their kids take challenging college prep courses that will help them attain future success. Considering that Fairfax and Montgomery, along with Arlington and Alexandria, are the districts in which many reformers choose to place their kids, the silence among many about how poorly these systems serve minority children is unacceptable. 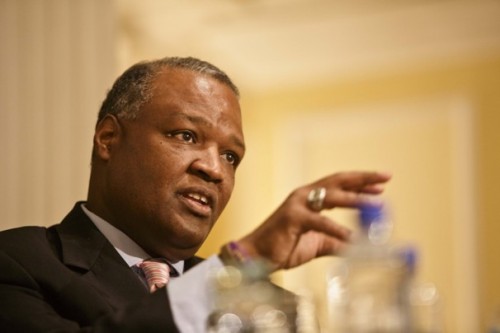 And Prince George’s County Executive Rushern Baker III has plenty of good reasons to take control of the faltering district.

Secondly: That poor-performing black-run school districts are perpetuating educational neglect on black children. Certainly D.C. Public Schools has cast-off its reputation as the toxic waste dump of American public education. But the district is still doing poorly in providing black children with college-preparatory curricula. The 15.6 percent of black middle-schoolers provided Algebra 1 by D.C. Public Schools’ is not only three times lower than than of the much-smaller KIPP, it is the second-lowest percentage (after Prince William County) for any district on the list. It is also the fourth-worst on the list (after Prince William, Prince George’s, and Fairfax County) in providing black high-schoolers with advanced math. Given the high levels of poverty among blacks in the nation’s capital, D.C. Public Schools must do better in helping their children gain opportunities for lifelong success.

But at least D.C. is improving. Prince George’s County, which is the home base for Dropout Nation (as well as the district serving the wealthiest majority-black county in America) should be especially ashamed of how poorly it is doing for black children. Prince George’s is third-worst in providing black middle-schoolers Algebra 1,   Even worse, it doesn’t even provide college-preparatory curricula to either Latino kids (its fastest-growing population) or to white kids. This isn’t to say that Prince George’s is doing terribly in everything for black children; the district is also home to some of the best-performing elementary schools in the D.C. area for young black men (something that can rarely be said for Fairfax or Montgomery County). But Prince George’s failure to provide black children with college-preparatory curricula (along with the impact of its missteps on the county’s future economic prospects) is one reason why County Executive Rushern Baker III successfully won partial control over the district’s operations last year. It is absolutely shameful that black teachers and school leaders are perpetuating the kind of educational abuse and neglect we would consider intolerable if done by their white counterparts.

Beltway reformers (and the movement overall) can’t hold districts in the rest of the nation accountable for providing high-quality education to poor and minority kids if they aren’t also holding school systems in their own back yard to account.