RiShawn Biddle
3 Comments on The AFT Pays to Play

The American Federation of Teachers just filed its latest filing with the U.S. Department of Labor — and its efforts to preserve its declining influence over education policy continue unabated. The nation’s second-largest teachers’ union spent $29.1 million on political lobbying activities and contributions to what should be like-minded groups; this, by the way, doesn’t include politically-driven spending that can often find its way under so-called “representational activities”. This is a eight percent decline from spending last year.

The AFT clearly has its eyes on the 2016 presidential campaign, and more-importantly, on ending the sway school reformers currently have over education policy within the Democratic National Committee. The union gave $250,000 to the Bill, Hillary & Chelsea Clinton Foundation, the philanthropic arm for the perpetually-campaigning former president and his wife, who will likely run for the Democratic presidential nod in the next two years. The AFT also gave $200,000 to the Clinton Global Initiative, which is the other non-explicitly political wing of the Clinton family’s always-political efforts. Expect the National Education Association to give plenty to the Bill and Hillary Clinton empire, when its annual financial filing comes out in November. School reformers better be ready to pony up as well.

The union’s backing for Hillary will likely go beyond pay-to-play. The AFT has paid $378,833 to political consultancy Adelstein Liston, which helped the union back Clinton’s 2008 Democratic president nomination run. You can expect that Adelstein Liston is working on behalf of the union, along with other longstanding clients such as the American Federation of State County and Municpal Employees, to get Clinton the nomination if she runs again.

The AFT is also stepping up its funding of progressive outfits it, along with NEA, has worked hard to co-opt. These progressive groups will play key roles for the union in getting activists within the Democratic Party to support its aims (and that of the NEA) on education policy. There are the usual suspects such as the Progressive States Network, which collected $25,000 from the union, Progress Majority, which was given $5,000 from coffers filled by dues teachers are forced to pay, and the Nation Institute (an arm of the bible of the progressive left) which received $10,000 from the union. Netroots Nation, another longstanding beneficiary of AFT funding, picked up a $25,000 check, while Progress Michigan collected $20,000 from the union. And the Center for Popular Democracy’s Action Fund, which has campaigned against the expansion of charter schools and so-called “privatization” of American public education, got $60,000 in AFT dollars.

But there were new recipients. This includes In the Public Interest, the anti-privatization outfit that has launched a series of reports supposedly uncovering scandals involving public charter schools; it picked up $25,000 from the union. There’s also the publisher of Dissent, a progressive magazine that occasionally makes The Nation seem conservative in comparison; it got $25,000 from the AFT. Then there’s Demos, the progressive think tank, which got $13,333 from the union. Another new recipient of AFT funding: The Movement Strategy Center, a San Francisco-based outfit whose managing director, Rachel Burrows, is a veteran of now-defunct AFT beneficiary ACORN. Harvard University’s Initiative for Responsible Investment, which advocates for so-called corporate social responsibility activities, got $10,000 from the union.

Meanwhile the AFT has been doling out plenty to allies focused on living wage and other labor issues. This includes $20,000 to Good Jobs First, a Beltway-based outfit which focuses on ending corporate welfare for the so-called one percent (a group that would include many within the AFT’s leadership), and $11,200 to Labor Council for Latin American Advancement, which aims to bring Latino workers into unions. The AFT also gave $13,625 to the Asian Pacific American Labor Alliance, $10,000 to the Jewish Labor Council, $5,000 to Coalition of Black Trade Unionists, and $5,000 to Coalition of Labor Union Women.

The AFT has been stepping up its funding of black and other minority outfits. It gave $80,000 to the Congressional Black Caucus Foundation, the nonprofit arm of the power group within congressional and Democratic Party politics, and $35,000 to the Congressional Hispanic Caucus Institute. The National Board of Hispanic Caucus Chairs, the lobbying arm for Latino state legislators, and the NALEO Educational Fund each picked up $5,000 from the union; while the National Black Caucus of State Legislators, the National Council of Negro Women, and the National Council on Educating Black Children each got $5,000. Jesse Jackson’s Rainbow PUSH Coalition, which has long ago decided to ride in the pockets of the AFT, received $25,000 from the AFT (it has collected $75,000 from the union over the last two years); so did Al Sharpton’s National Action Network, likely this time for supporting efforts by the union’s Big Apple local to oppose efforts to end tenure (as well as to get the union to back its efforts on police brutality). 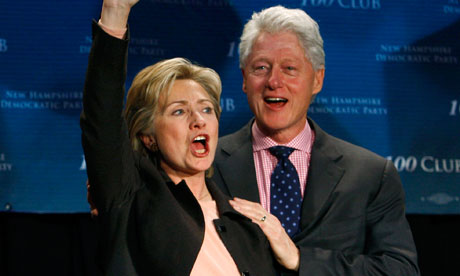 The AFT is pouring $550,000 into likely Democratic presidential candidate Hillary Clinton and her ex-president husband’s political empire in order to get them on its side.

Meanwhile the AFT has given heavily to groups geared toward helping the union defend the traditionalist policies and practices that sustain it. The biggest recipient: The Schott Foundation for Public Education’s Opportunity to Learn Action Fund, which picked up $150,000 in exchange for its efforts to oppose systemic reform efforts; Schott itself picked up another $30,000. The AFT also gave $75,000 to the Florida-based Alliance for Public Schools, which has been working to push for additional school funding in the Sunshine State. Meanwhile the AFT gave $49,120 to ACTION United, the so-called grassroots group in Philadelphia which has served as an ally of its Philadelphia local in its efforts against the financially-strapped district to keep it from closing half-empty schools and overhaul how it compensates teachers.

The AFT also gave $50,000 to Alliance for Quality Education, the New York outfit which, along with New York Communities for Change, took aim at former CNN anchor-turned-school reformer Campbell Brown for her efforts to end near-lifetime employment privileges at the heart of its patron’s influence and financial sustenance. New York Communities, by the way, picked up $10,000 from the union for its efforts. Common Good Ohio, an outfit which is working with the AFT’s Cleveland local on beating back Mayor Frank Jackson’s reform efforts, also got $50,000. And the Annenberg Institute, whose efforts on weakening charter schools dovetail nicely with that of the AFT, got $24,963 from the union for its troubles.

As for the usual suspects? The Economic Policy Institute, the virtual mouthpiece for the AFT and other labor unions on various policy issues, picked up $275,000, while the Learning First Alliance got $53,964 from the union. The Council for the Accreditation of Educator Preparation, which was formed by last year’s merger of the National Council for Accreditation of Teacher Education and the Teacher Education Accreditation Council, received $69,330 from the union. And through the University of Colorado Foundation, the AFT dropped another $50,000 into the National Education Policy Center, the group run by Kevin Welner that has been a reliable flack for AFT and NEA positions against systemic reform.

The AFT’s apparatchiks also did well. Michelle Ringuette, a former operative with the Service Employees International Union (who is infamous for her role in that union’s ouster of the leaders of its California healthcare affiliate that set off one of the nastiest labor feuds), made $210,266 as Weingarten’s assistant (and replacement for Hartina Flournoy) in 2013-2014; while Michael Powell, who handles Weingarten’s communications activities, earned $248,249. David Strom, the union’s general counsel, made $205,762, more than the $201,288 earned in the previous year; while Kristor Cowan, the AFT’s chief lobbyist, earned $179,564, slightly more than the $178,040 in 2012-2013. And Kombiz Lavasany, who oversees Weingarten’s money manager enemies’ list, earned $183,547, a whopping increase over the $146,427 earned in the previous year.  Altogether, 219 AFT staffers made more than $100,000 a year, 21 more than in 2012-2013.