RiShawn Biddle
Comments Off on Jesse Jackson Gets AFT Money

Dropout Nation is still perusing the American Federation of Teachers’ latest disclosure filing with the U.S. Department of Labor. So far, others, including Larry Sand of the California Teachers Empowerment Network, have pointed out the AFT’s penchant for using dollars forcibly collected from teachers regardless of their desire for union representation for purposes with which they may not agree. At the same time, DN has dug up more interesting news about how the nation’s second-largest teachers’ union spends its money to defend its influence as well as the array of seniority-based privileges that fill its coffers to the tune of $321 million (including $117 million in proceeds from its line of credit).

One beneficiary of the AFT’s largesse is the Rainbow PUSH Coalition, the outfit run by Rev. Jesse Jackson, Sr.. It received $50,000 from the AFT in 2012-2013, likely in exchange for Jackson’s support for the efforts of the union’s notoriously bellicose Chicago local to oppose the systemic reform efforts undertaken by current Mayor Rahm Emanuel and his predecessor, Richard M. Daley. Based on Jackson’s appearances for the union — including a rally held last March against the Second City’s closing of 53 schools — the AFT has gotten its money’s worth. At the same time, the news that Jackson’s Rainbow PUSH has been the recipient of AFT largesse for the second year in the row is another sign of how little concern Jackson, along with his fellow old-school civil rights leaders and outfits such as the NAACP, have for the futures of black children who suffer the most from the failed policies and practices the AFT, along with National Education Association, defend so fiercely.

For far too long, Jackson and his colleagues done little more than defend the very practices and schools that have ruined the futures of young black children as well as opposing the expansion of school choice that minority families support. Jackson in particular has done almost nothing to advance systemic reform in his own hometown, and has offered little in the way of ideas on how to end an educational crisis that condemns half of all young black men to the economic and social abyss. At a time in which education is the civil rights and economic empowerment issue of our time, Jackson and his old-school civil rights colleagues in Chicago as well as throughout the nation, have abdicated their roles as advocates for brighter futures for black and other minority children.

In taking more AFT money, Jackson continues to tarnish his legacy as a voice for helping blacks attain the very liberties they deserve and patriarch of a once-potent political dynasty. At the same time, Jackson joins his fellow old-school civil rights activists in alienating black families, particularly those in urban communities often served by failure factories, who have become major supporters of expanding choice and are forming their own groups to sustain reform. For this, Jackson should be ashamed of himself.

But as it has been noted, Jackson isn’t the only person supposed to be defending black children taking money from the AFT. There’s the NAACP, whose receipt of $27,500 in AFT funds was mentioned last week by Dropout Nation. There’s also the Black Institute, a New York City-based outfit run by Bertha Lewis, the former chief executive officer of the infamous (and now-defunct) ACORN, took $30,000 from the AFT during its last fiscal year. The Samuel DeWitt Proctor Conference, which rallies black churches around social issues, also receive $5,000. Among left-leaning activist groups, the North Star Fund was the recipient of $50,000 in AFT funds; the union attempted to play off the Newtown massacre by giving another $50,000 to the Sixteen Thirty Fund. The AFT also built closer ties to the AFL-CIO, the umbrella group for the nation’s private- and public-sector unions. It gave $862,834 to the union group. This includes $400,000 to its State Unity Fund, and another $250,000 to its political action committee. 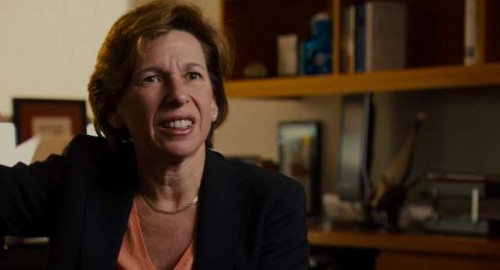 AFT President Rhonda (Randi) Weingarten has figured out how to leverage the union’s dollars to co-opt old-school civil rights players.

Meanwhile the AFT has spent plenty this past fiscal year to kibosh efforts by reformers to expand school choice. It paid $21,434 to Rittenberg, Samuel & Phillips, which represented the union’s Louisiana affiliate in its successful suit to stop the Bayou State from using its school funding formula to finance its expanded school voucher program. While Louisiana Gov. Bobby Jindal found another way to finance the voucher program and state judges ruled that the voucher program was constitutional, the AFT did succeed for a time in temporarily setting back the expansion of high-quality options for all children.

The AFT poured even more money — $750,000 — into the Public Education Defense Fund operated by the Florida Education Association (which is both an AFT and NEA affiliate). The group, in turn, successfully beat back efforts by reformers and school choice activists in the Sunshine State to expand choice (and abolish the religious bigotry-driven Blaine amendment banning the use of public school dollars for expanding access to high-quality private school options for poor and minority kids) through the passage of Amendment 8.

But the AFT didn’t just limit itself to defense battles against school choice. The union also ponied up $500,000 to Alliance for a Better California 2012 last fiscal year, the organization that successfully battled Proposition 32, which would have stopped the AFT’s California branch (along with the NEA and other public-sector unions) from using member dues for financing ballot and political campaigns; the AFT, along with its California affiliate, gave $1. 5 million to the outfit altogether during the 2011-2012 election cycle. For Alliance for Better California, the AFT was a small potatoes contributor; the outfit raised $65 million, according to the National Institute on Money in State Politics; this includes a massive $21 million from the NEA’s California affiliate, the California Teachers Association, along with $3.2 million from the Golden State’s Democratic Party, which benefits greatly from the dues teachers and other public-sector workers are forced to pay into union coffers. The AFT also put $250,000 during 2012-2013 to Californians Working Together to Restore and Protect Public Schools, Universities, and Public Safety, the outfit that successfully pushed Proposition 30, which raised $50 billion in new taxes, much of which went to finance the insolvent pensions and unfunded retired teacher healthcare benefits that the AFT continue to defend. [Altogether during 2011-2012, the AFT and its Golden State affiliate poured $2 million into the effort; altogether, it was the group’s largest funder.]

You can check out the data yourself by checking out the HTML and PDF versions of the AFT’s latest financial report, or by visiting the Department of Labor’s Web site.

The Need for Courageous Reformers

Once Again, There Are No Unmotivated Parents