Once Again, There Are No Unmotivated Parents

RiShawn Biddle
Comments Off on Once Again, There Are No Unmotivated Parents

A myth that remains widely-held in American public education is that families, especially those from poor and minority backgrounds, are not motivated to play active and powerful roles in education for their children.  Especially for traditionalists, this perception that lackadaisical and unmotivated parents are a reason behind low student achievement allows them to excuse the systemic problems that are behind the nation’s education crisis.

Yet as seen today in New York City, where 17,500 parents and other family members of children attending charter schools held a march to put mayoral aspirant Bill de Blasio on notice that they will not tolerate his declarations that he would effectively kibosh the expansion of school choice, the myth of unmotivated families is pure bunk. As you would expect, Michael Mulgrew, the president of the American Federation of Teachers’ Big Apple local, the United Federation of Teachers, is sniffing at the event, claiming that is merely a front for charter school operators such as Success Academies, the outfit run by former New York City councilwoman Evan Moskowitz. Your editor would expect nothing less from him. But Mulgrew has a conveniently short memory. Two years ago, families and charter school operators held protests against the AFT and the local branch of the National Association for the Advancement of Colored People after the two teamed up on a lawsuit against to stop Mayor Michael Bloomberg’s practice of allowing charters to share space with traditional district schools in half-empty spaces. The battles between the NAACP and charter school parents in particular, would be particularly embarrassing to traditionalists after incidents such as NAACP official Hazel Dukes accused charter school parents were “doing the business of slave masters”.

Meanwhile there are other Parent Power efforts happening throughout the city and the nation. Some, such as an event held in August by the New York branch of StudentsFirst, are being held by school reform outfits who realize the need for families to play their rightful roles as lead decision-makers in education for their kids. Others such as those held by the New York City Parents Union are efforts arising from families who have become reformers because, to use the old phrase about former liberals who became conservatives, their children have been proverbially robbed of high-quality teaching and curricula. Meanwhile across the country in California, families such as those who sent their kids to the former Desert Trails Elementary in Adelanto have seized control of failing schools thanks to the Golden State’s Parent Trigger law, and began the hard work of transforming failure mills into cultures of genius. And in other states, emerging Parent Power groups — from those pushing for the end of school residency laws and other Zip Code Education policies that have made parents criminals for daring to provide their kids with high-quality schools, to those expressing wrongheaded opposition to the implementation of Common Core reading and math standards in 45 states and the District of Columbia — are showing that reform is possible when families stand up for their kids.

What is clear from these experiences is that families can be lead decision-makers in education when they are provided the data and knowledge needed to help their children, as well as the ability to choose high-quality opportunities or even overhaul the failing schools within their neighborhoods. The experience of the charter school and Parent Power movements — and before that, of the Catholic diocesan schools that were the main alternatives to traditional public education in the last century — has proven that choice and power  are both amazing motivators; families will do all they can for their kids if given knowledge and options. Especially as families realize that the two other myths American public education has perpetuated over the past two centuries — that a child can be sent to any teacher or to any school and they will get a high-quality education — isn’t so, and that the quality of instruction can vary not from school to school and, more importantly, even from classroom to classroom. 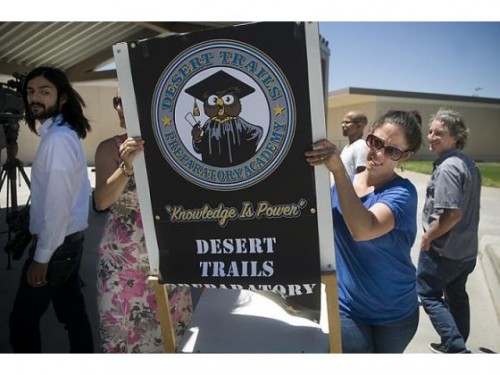 Families of children attending the former Desert Trails Elementary in Adelanto, Calif., took power — and began the overhaul of the failing school.

It is also clear that American public education does plenty to make it difficult for parents to do so.

As Peter McDermott and Julia Johnson Rothenberg of the Sage Colleges have noted in their research on school engagement, urban and low-income parents often perceive schools to be unwelcoming and interactions with teachers to be “painful encounters.” Certainly some of this has to do with the negative experiences these parents have had with schools — especially those failure mills that they once attended and to which their children now go. But it is also reflective of the reality that we have far too many teachers and school leaders who look down on poor urban parents who may not be capable of helping their kids because of their own learning issues; who are hostile to those families who want to take an active role in shaping the education their kids receive in school; and would rather keep those families servile.

But it isn’t just a problem for urban families alone. The penchant for many teachers and administrators to treat families as nuisances and afterthoughts is as strong in suburbia — where parents supposedly have the clout to force change — as it is in big-city districts. From inconveniently-scheduled parent-teacher conferences, to the lack of meaningful communication about student progress until it is far too late to help kids succeed, to the lack of information for black and Latino families on their options for preparing their kids for success in school and in life (including  Advanced Placement courses and dual-credit programs that allow them to take community college courses that they can use for getting ready for the rigors of higher education), districts also act, both deliberately and otherwise, to disengage families from taking action for their children.

Meanwhile mothers and fathers lack access to high-quality data that is both comprehensive and yet simple to understand in order to make smart decisions. School data remains a black box of sorts, driven by compliance as well as the interests of districts and teachers’ unions to hide evidence of the failures of American public education rather than by the need to give parents information they need to make smart choices.  Organizations such as GreatSchools.org and the Education Consumers Foundation are helping to make school data more transparent and easy to use; the efforts of the Data Quality Campaign are working to improve the quality of state and district data systems. But much remains to be done on overhauling how data is collected and provided. And even when the data is available, state laws, the opposition of teachers unions to releasing data, and now, the Obama Administration’s effort to eviscerate the No Child Left Behind Act and its accountability measures (which provided data that has helped advance reforms in the last decade) have made it harder for families to get the data they need.

Families also need a wide array of high-quality opportunities both within and outside of their communities. But the fact is that only 42 states allow for the existence of charter schools; even in those states, the fact that traditional districts are given the authority to decide whether charters can exist, an approach akin to allowing McDonald’s to decide if a Wendy’s can open next door, means that choice is often restricted, especially in suburbia. The fact that only 10 states have school voucher programs, 11 states have voucher-like tax credits, and only seven states have Parent Trigger laws on the books, also limits the ability of families to take power in education. Particularly for the families of the 38 percent of black students and 33 percent of Latino students forced by Zip Code Education policies (and systemic decay within districts) to attend dropout factories, there are few options to escape failure. 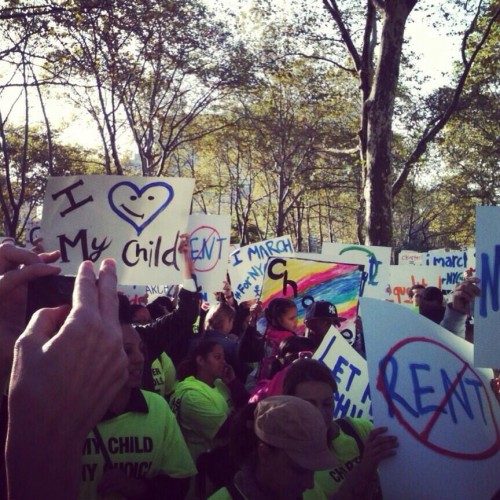 Meanwhile families must also know what their children need to know in order to succeed in adulthood. They need to know what a child should know by third grade. They must understand that kindergartners should know by the end of the school year that numbers represent quantities. And they need to know 40 percent of all students will come into kindergarten with some form of reading deficiency no matter what families do or don’t do on the literacy front — and that schools should be equipped to help provide kids with intensive reading remediation instead of putting them into special education ghettos that condemn their futures. But districts do little to inform families even when parents dare to ask. [By the way: This reality is why Dropout Nation helps families through its Five Questions Every Parent Should Ask podcast series as well as the new collection of podcasts on Common Core standards.]

But as today’s demonstration has shown — and as it can be seen throughout the nation — families are willing to beat back against those barriers when provided the tools to do so. In fact, most families are willing to take on the responsibility of transforming education if informed and empowered. This is where the school reform movement must step up. It starts by expanding all forms of school choice as well as advancing the passage of Parent Trigger laws that give families the ability to change the direction of the lives of their kids and the communities in which they live. It continues by providing families with high-quality data (including information on teacher performance) that they can use to make smart decisions; this includes ending the Obama Administration’s No Child waiver gambit and building upon the sensible approach to accountability brought to bear on American public education 11 years ago through the passage of No Child itself. It also means building up online and physical libraries of information that families can use in order to know what to expect from teachers, school leaders, and others who serve their children. And it means standing up with families and with others in the grassroots at all times.

What happened in New York City today was another reminder that families will stand up for the children they love. As with so many other failed theories and practices in American public education, the myth of unmotivated parents should be tossed into history’s ashbin.

Photo courtesy of Richard Barth of the Knowledge is Power Program.