Stop Rewarding Districts for Getting to Average (Broad Prize Edition)

As you already may know, the Houston Independent School District has won the Eli & Edythe Broad Foundation’s prestigious and eponymous award for urban school reform. And school reformers, especially those in the Beltway and among institutions, are congratulating the district and its superintendent, Terry Grier, for winning the award for the second time in the last 11 years. But your editor won’t join in the celebration. Why? Because Houston’s performance, while better than many districts, isn’t good enough for our children, especially in an age in which knowledge is key to lifelong success.

As Dropout Nation noted back in April, neither Houston nor any of the other four districts who were finalists for the Broad Prize have really met the success in preparing kids for success in college and career that is now the high standard for performance by districts and other school operators. Houston’s nine percentage point reduction in the number of fourth-graders reading Below Basic between 2002 and 2011 (as measured by the National Assessment of Educational Progress) may have been better than the six percentage point decline for the nation as a whole. But it was bested by other districts, including New York City (which reduced illiteracy by 15 percentage points in that period), and Chicago (which yielded a 14 percent decline). Both Big Apple and Second City fourth-graders were reading a grade level higher than peers in 2002; Houston’s fourth-graders in 2011 were only reading half a grade point level higher. Houston’s 10 percentage point decline in functional illiteracy among eighth-graders was also behind the Atlanta’s 16 percentage point decline and the 13 percent reduction by the notoriously intransigent Los Angeles Unified. In the case of both Atlanta and L.A. Unified, middle-schoolers in 2011 were reading at, respectively, two grade levels and one grade level higher than peers in 2002, while the average Houston eighth-grader in 2011 was only reading half a grade-level better than a peer eight years ago.

When it comes to providing kids with the college preparatory curricula they need in order to do well in traditional colleges, community colleges, technical schools, and apprenticeships that make up higher education, Houston is just plain doing poorly. Just 8.8 percent of Houston’s high school students took trigonometry, statistics, and other forms of advanced math in 2009-2010, according to the U.S. Department of Education, while only 19 percent of high schoolers took Advanced Placement courses that help prepare kids for college and career success. Meanwhile only 10 percent of Houston’s middle-school students took Algebra I that year, which means that many kids are not being prepared for long-term success. To put it in baseball terms, Houston is reaching the proverbial Mendoza line, achieving average results. But average isn’t enough for children. And the Broad Prize shouldn’t go to average-performing districts.

But as Dropout Nation noted, Houston wasn’t the only problematic Broad Prize nominee. Nor is Houston the only reform-oriented district touted by the movement that deserves look askance. Far too often, school reformers are so focused on talking about the stories of districts succeeding in improving graduation rates and basic literacy that they forget that achieving those goals are no longer acceptable. This is clear from data on job growth which show there is little growth (and often declines) in sectors that were the go-tos for high school grads without at least some college education (as well as dropouts), while the jobs with strong job growth those demanding higher levels of knowledge. At a time in which some form of higher education – from traditional college to apprenticeships in welding and other blue-collar professions – is critical to attaining middle-class incomes, the school reform movement cannot simply pat districts and school leaders, especially those in urban communities which are home to poor and minority children,  on their backs for getting to average. Or, as my grandmother used to say, you don’t deserve praise for doing what you’re supposed to do.

Your editor expects some criticism from reformers for being unwilling to celebrate Houston’s Broad Prize win. Oh well, I can take it. But our children deserve better than average. Because average just isn’t good enough for their futures. 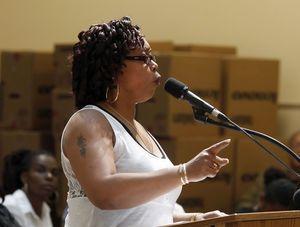 Photo courtesy of the Republican American.

Battling for Parent Power: Walsh Elementary Edition: Earlier this year, Dropout Nation reported on the move by families at Walsh Elementary School in Waterbury, Conn., to use the Nutmeg State’s Parent Trigger law to take control of the school from the traditional school district that operates it. At the time, the school governance council representing families and teachers at the school voted unanimously to launch the effort after the Waterbury district, looking to take advantage of a key aspect of Gov. Dan Malloy’s school reform effort, began exploring plans to remove the school’s principal, Erik Brown, and effectively kibosh parent power by putting the school under the state’s Commissioner’s Network of schools in turnaround. Since then, Waterbury sacked Brown amid allegations that he harassed teachers at the school and put an interim principal in his place. The district has also continued insisting that Walsh Elementary families can’t use the Parent Trigger law to take over the school. Meanwhile the school governance council’s president, Athena Wagner, teamed up with Connecticut Parents Union President Gwen Samuel against the district and the state to prevent the school from being put into the Commissioner’s Network.

Given all this, it was no surprise that Waterbury and families at Walsh are once again sparring with each other, this time over when elections for the school governance council are supposed to be held. Wagner, along with others on the council, argue that Waterbury is pushing to hold the elections tomorrow even though they are not required until November. The district, on the other hand, declares that it has the power to set the timetable for the election and will hold it this week. As a result of this disagreement, Wagner and her colleagues convened others sitting on school governance councils throughout the state to discuss what action to take next. [The Connecticut Parents Union is already weighing in on this matter.]

From where Wagner and others sit, Waterbury is merely looking to find another way to get around state law and neutralize the school governance council charged with deciding whether to launch a school takeover. Earlier this month, in a meeting with Nutmeg State officials, the district accused Wagner and others on the council of violating the state’s open meeting law. Wagner and others accuse district officials, including interim principal Gina Calabrese and interim co-principal DeNorris Crosby, of being unwilling to work with them on scheduling meetings and otherwise not communicating with them.

There are always two sides to matters such as these. So Dropout Nation will not comment directly on the latest dispute until there are more objective facts available. At the same time, given how districts (along with affiliates of the National Education Association and the American Federation of Teachers) have worked tirelessly to oppose efforts by families to use Parent Trigger laws and exercise their rightful roles as lead decision-makers in education, the latest battle at Walsh Elementary isn’t shocking. Which is why reformers must do more to support Parent Power on the ground.

The GAO Report on the Bureau of Indian Education: Another Opportunity for Reform