Once Again, It’s Time to Break Up L.A. Unified

RiShawn Biddle
3 Comments on Once Again, It’s Time to Break Up L.A. Unified 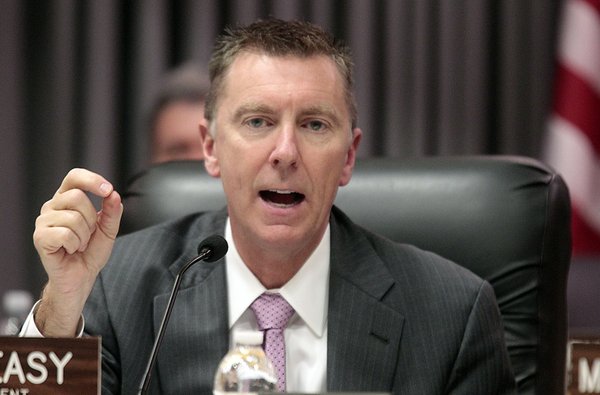 The countdown may have begun for the end of John Deasy’s tenure. L.A. Unified should see its last days too.

One thing about the future of systemic reform in the Los Angeles Unified School District became clear last week after its board voted five-to-two to name longtime traditionalist Richard Vladovic as its president: It is on life support for at least the next two years. After all, the former L.A. Unified teacher and bureaucrat is a creature of the district’s old-school bureaucracy who has sparred with the reform-minded superintendent, John Deasy, throughout his tenure on the board; that, along with perceptions of Vladovic as a moderate, makes him a better representative for the interests of traditionalists such as the American Federation of Teachers’ City of Angels local (which backed his run for the top board seat) than either Bennett Kayser (who everyone knows is too  deep in the union’s pocket to even be considered independent), or wishy-washy types such as Steve Zimmer (who vainly held out hope that either traditionalists or reformers on the board, who don’t trust him, would nominate him for the top spot). Sure, Vladovic faces accusations of sexual harassment from his former chief of staff as well as a reputation for screaming at district officials. But none of that matters to traditionalists who wholeheartedly oppose reform.

So one can expect the district’s board to make it harder for families of children attending dropout factories and failure mills to leverage California’s Parent Trigger law as families at two schools — 24th Street Elementary and Weingard Elementary — have done within the past five months. The board took steps to do so last month when it approved a measure by Zimmer under which Parent Trigger petitions are “independently” verified (along with other bureaucratic procedures) that will stifle future school takeover attempts. No one should expect L.A. Unified to embark on efforts such as the now-shuttered initiative to spin off 198 schools to charter school operators, families, community groups, and groups of teachers; one may also see the number of new charters approved by the district to decline significantly, especially since the move by the Golden State’s school board this past May to end its authorizing of charters takes away much-needed outside pressure on the district to expand school choice.

What else is clear? That the board majority will spar more frequently with Deasy, who has at least talked the talk on systemically reforming the district (even as he makes rather weak moves as striking a deal with the AFT local on a teacher evaluation plan that does little to actually measure the performance of teachers based on their success with the students they instruct in classrooms). Even before Vladovic stepped in as president, Deasy has done all he could to sidestep traditionalists and moderates on L.A. Unified’s board (with the implicit support of Garcia and other reformers). This included backing the successful lawsuit filed against the district by a group of Southern California families organized by activist Alice Callaghan (with backing from the school reform group EdVoice) over the district’s failure to use student performance data in teacher evaluations as required under the Golden State’s Stull Act. Within the last month, Deasy made clear that he would proceed with his plan to essentially move to a weighted student funding approach to budgeting, handing more dollars to schools serving poor and minority children while allowing principals to manage their own budgets; this partially defies the plan passed by traditionalists on the board to mandate the district to hire more teachers, guidance counselors, and other staff across the board regardless of the needs of the schools and the children they serve. [Zimmer was particularly displeased that allies of Deasy, including the Los Angeles Times‘ editorial page, were calling out those who supported the mandate for their fiscal and educational fecklessness.]

Vladovic and his allies on the board are unlikely to immediately hand Deasy his walking papers. After all, it wouldn’t play well to the public, who thinks highly of Deasy’s work so far, (and would recognize the move as a gift from the majority to the AFT local for its backing of their respective candidacies). Deasy’s immediate firing would also reaffirm L.A. Unified’s longstanding reputation as the district where reform is squashed before it yields fruit, as well as remind families about why they backed the reform coalition cobbled together by now-former Mayor Antonio Villaraigosa that briefly controlled the district. But the majority (which includes new board member and occasional reformer Monica Ratliff) are likely to do as much as they can to make it harder for Deasy to proceed with his reform efforts. More importantly, Vladovic, Kayser, and LaMotte — who form the core of the majority — will start building a case against keeping him on the job beyond June of next year; while Zimmer is a wildcard of sorts (and is mindful of the election challenge he faced from reformers earlier this year over his wishy-washiness), his own issues with Deasy gives the big three a potential ally in their cause.

What will result from the sparring between Deasy and traditionalists on the board is instability within the district’s operations. The best of L.A. Unified’s school leaders, looking for clear direction from the central office, will find themselves looking for new jobs in order to get away from the developing dysfunction. Initiatives launched by Deasy that are already underway will begin to flounder as the new board majority pushes its own priorities. Deasy will be constantly undercut by Vladovic and his allies as they find more reasons to question his efforts to overhaul teacher performance management. The district’s bureaucracy will then backslide into the mediocrity and failure that is one reason why the district failed to evaluate 60 percent of veteran teachers and 30 percent of new hires during the 2009-2010 school year, before Deasy became superintendent.

Certainly Deasy has the advantages of popularity and a bully pulpit of sorts, along with a constituency of reformers on the board and throughout the district; he can rally families and other around his own efforts to tackle the district’s abuse of children in its care (including the abetting of the criminal abuse of students by the likes of former Miramonte Elementary School teacher Mark Berndt). But Deasy can no longer count on Villaraigosa and cannot expect much help from his successor, Eric Garcetti, who must keep in mind his own promises to the AFT local that backed his successful mayoral campaign (and whose own reform-lite approach essentially emphasizes playing nice with traditionalists). And given that reformers didn’t help Deasy with their losses in this year’s board races, the superintendent is in a weaker position than he was at the beginning of the school year.

Children forced to attend L.A. Unified’s schools, along with their families and other taxpayers, are the ones who will pay the price. It isn’t if they can easily escape. Sure, the number of children attending charters increased by 67 percent between 2009-2010 and 2011-2012; but charters still only account for 15 percent of enrollment (as of 2011-2012), according to the National Alliance of Public Charter Schools.

None of what is happen (and will likely play out) is shocking. The average big-city district chief executive stays on the job for a mere four years, according to the Council of the Great City Schools, largely because they lack the political constituency needed to keep their jobs for long tenures. The influence of AFT and National Education Association locals, who are the biggest players in school board elections, means that any reform-minded superintendent who angers the union will soon find himself out of work. Particularly in the case of L.A. Unified, the district’s penchant for forcing out reform-minded school leaders, board members, and even teachers such as the legendary Jaime Escalante makes the likelihood of Deasy remaining in the top job beyond 2014 even less likely than in other districts.

Reformers within the City of Angels have learned all too well that it is difficult to keep together coalitions within a district that sprawls throughout Los Angeles County (including 31 smaller cities as well as the City of Angels itself). There are also no easy alternatives. Mayoral control of the district would be the best approach. But that’s unlikely, especially since Garcetti is even less likely to pursue it than Villaraigosa, who attempted such an effort seven years ago with little success. A more-optimal solution would be for L.A. County’s board of supervisors to play a prominent role in spurring reform and perhaps, attempt a takeover of the district. There’s also building stronger relationships with L.A.’s city council, including players such as Bernard Parks, who realize that they must play stronger roles in overhauling L.A. Unified. But both approaches will take more time than children and their families can afford.

Just as importantly, it is hard to justify keeping L.A. Unified around as is. Legendary hip-hop star Ice Cube is correct in declaring yesterday that City of Angels’ children and adults are victims of the district’s systemic academic failures. Keeping L.A. Unified around is also hard to support from a fiscal perspective. L.A. Unified’s unfunded retired teacher and school employee healthcare costs increased by 26 percent between 2011 and 2012, according to its most-recent annual report; it now has $4 billion in costs that its taxpayers must somehow pay down in the next 17 to 30 years. [None of this, by the way, includes its portion of the state Teachers Retirement System’s $87 billion pension deficit.] Considering that L.A. residents (along with their counterparts in other cities served by L.A. Unified) are struggling with pension shortfalls for their respective city governments, it’s hard to justify L.A. Unified’s existence.

So reformers should start a more-radical reform effort that is essentially geared toward abandoning L.A. Unified’s traditional district model. This starts with rallying more families to use the Golden State’s Parent Trigger law to take over schools that their children attend. Even with the new restrictions put into place, reformers could work with families to navigate the rules in order to advance school takeovers. Working with existing charters such as Green Dot to expand their capacity for serving more children would also help. Reformers should also work with the single-parent households, immigrant families, and others in the grassroots (along with reform-minded teachers and school leaders) to engage in DIY education efforts.

Finally, it is time to break L.A. Unified apart into smaller districts along the boundaries of the 32 cities it serves, then abandon the traditional district model for each of the new districts altogether, putting schools into the hands of an array of charter school operators, community groups, families, and others. L.A. Unified’s bureaucracy has proven long ago that it is impervious to change in its current form. In an age in which scale is far less important than providing children with high-quality teaching and instruction — and after decades of evidence showing that the traditional district model is no longer worth preserving — there’s no reason to keep things as they are. Breaking up L.A. Unified, along with other reforms, would be good for children and families.

Three ThoughtsVoices of the Dropout Nation