Grandpa’s Seiko, Or Why We Must Build Cultures of Genius That Last Beyond Our Lifetimes

RiShawn Biddle
Comments Off on Grandpa’s Seiko, Or Why We Must Build Cultures of Genius That Last Beyond Our Lifetimes 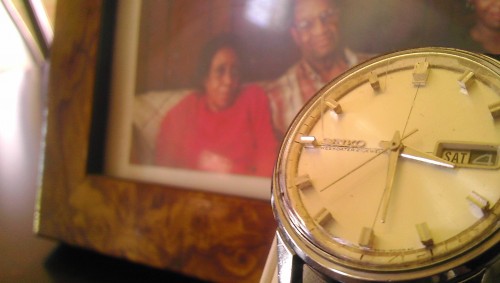 One of the most-prized of my physical possessions is an old Seiko 5 Sportsmatic Weekdater watch that belonged to my grandfather. Grandpa wasn’t sure whether he got the watch in 1965 during a trip to Japan or it was a gift from his brother, Earl. But it did work well enough that he kept it in his collection of watches and other jewelry long after he switched over to other timepieces until he gave it to me in 2007, a year before he went home to God. And after a little cleaning and restoration, this Seiko automatic keeps fairly good time and looks as beautiful as it 48 years ago — even after having taken more than a few lickings that should have stopped it from ticking. In fact, it was the watch I wore the day I married my lovely wife.

My grandpa left me more than just a watch. From the time I was still in my mother’s womb until the day he died, he taught me right from wrong, showed me how to install light switches, and disciplined me on behaving well towards others. That’s just some of the things on which he gave me actual instruction. Over the years, I learned the importance of literacy from watching him read newspapers, gleaned the value of hard work from watching him toil tirelessly to provide for our family, and picked up on the value of being decent and kind to others from how he treated people around him. And as he grew older and battled heart attacks, strokes, and cancers that should have took his life long before he left this earth at age 84 — and ultimately, from his final battles with congestive heart failure — I also learned the importance of being tough and resilient even in the face of adversity. At the end of his life, he knew that all that he did would survive with his children, grandchildren, and great grandchildren, and will likely last generations beyond that.

The fact that my grandpa’s Seiko has not only outlasted my grandfather, but will likely last beyond the lifetime of my child now growing in my wife’s womb — and the fact that my grandfather’s example has extended beyond his own life — are testaments to this reality: That what we own and what we do lasts beyond our lifetimes. This is especially true when it comes to the communities in which we live and America as a whole. It is why we must build strong legacies that will help our children and their kin continue to bend the arc of history toward economic and social progress.

One of the foremost reasons why we must transform American public education because the crisis that pervades it is leading to far too many of our kids being dropped into the economic and social abyss. Fifteen percent of young men and women age 16-to-24 in 25 of the nation’s big cities — or 5.8 million young adults — are neither working, finishing high school, or studying in traditional colleges, apprenticeships and other forms of higher education, according to the Social Science Research Council in its latest report on the challenges facing young adult dropouts. In an economy in which what you know is more important than what you can with your hands — and in which annual compound growth in real weekly wages for high school dropouts has declined between 1963 and 2008 (even as high school grads, those with some higher ed training, and collegians have seen compounded annual wage growth of at least four-tenths of one percent) — these young adults are ill-equipped to play positive roles in either the economy or the communities in which they live. They are also unable to take advantage of opportunities for economic and social advancement outside of their hometowns; a mere 17 percent of high school dropouts move out of their home communities, according to economist Enrico Moretti, the author of The New Geography of Jobs: Who Wins, Who Loses in the New Innovation Economy, one of Dropout Nation’s Top Eight book selections last year. And the nation is already bearing the consequences of this, especially in the form of the billions in unemployment benefits given to the 16 percent of dropouts aged 16-to-24 (and the 11 percent of peers aged 25 and older) seeking work who are unemployed — as well as welfare benefits for the 40 percent of young adult dropouts who aren’t seeking work at all.

The consequences of their despair extend to children because these young adults are lack the knowledge and skills, along with the discipline and nurturing that comes from education, needed to build positive legacies for them. This is especially true in the case of young women dropouts (especially those from black households) who become out-of-wedlock mothers in part because they see no point in either using birth control, delaying gratification, or seeking a diploma and degree. Thirty-eight percent of eighth-graders whose mothers were high school dropouts read Below Basic proficiency, according to the 2011 National Assessment of Educational Progress; that more than double the unacceptable levels of illiteracy for peers whose mothers were high school graduates and had either some higher ed training or graduated from college. [Thirty-seven of eighth-graders whose fathers were dropouts read Below Basic, again, double the percentages for peers whose fathers were high school grads and have sought some form of higher education.] This cycle, which began with their parents who were also dropouts, is continued into another generation, with prison, poverty, homelessness, and untreated mental illness being the legacies that plague future generations.

Yet poverty and low levels of educational attainment in themselves don’t have to be destiny for the next generation. These children have genius that can and should be nurtured. Some 3.4 million children from poor backgrounds — many of which came from homes where parents were either dropouts or merely received high school diplomas — were among the top-performers in their schools, according to a 2007 study by the Jack Kent Cooke Foundation. This should be no surprise. The reality is that cognitive ability is dynamic and not constant, as much influenced by the quality of learning environment (especially in school) and challenge (academically and otherwise) as it is by innate ability and growth over time. Children whose parents are dropouts can learn and succeed if they are provided high-quality education.

This is where the education crisis, whose failures are borne the most brutally by poor children (as well as those from minority households and young men of all backgrounds), come into play. Contrary to the arguments of some, most-recently Sean F. Reardon of Stanford University, growing income inequality is directly related to low-quality teaching and curricula. Children from poor and poorly-educated households are more likely than middle-class peers to attend schools staffed by low-quality teachers. Even worse, those low-quality teachers tend to perform even worse than laggards subjecting middle-class kids to educational neglect; the average low-performing teacher in North Carolina working in school serving mostly-poor kids was four-hundredths of a standard deviation worse in performance in math than a laggard in a middle-class serving school, according to a 2010 study conducted by a team led by Tim Sass, an economist now with Georgia State University.

Just as importantly, poor and minority children are less likely to be provided opportunities to take the kind of college-preparatory courses needed to both graduate from high school and succeed in higher education. Just 22 percent of high school students in Philadelphia (where 82 percent of all students are economically poor) took an Advanced Placement course in 2009-2010, according to the U.S. Department of Education. This lack of access to high-quality learning is a problem caused largely by a century of racialist- and class-driven rationing of education — especially the comprehensive high school model, gifted-and-talented programs (which falsely perpetuate the idea that they are cordons solitaire from the problems ailing the rest of education), and special ed ghettos used to condemn young men considered unteachable by those unwilling to instruct them. Add in Zip Code Education policies such as zoned schooling, school residency laws, and restrictions on the expansion of charter schools which restrict poor families from providing their children with high-quality learning opportunities, as well as the lack of high-quality information on the performance of schools and districts, and it’s little wonder why only 56 percent of high-achieving poor students remain that way by fifth grade — and those peers who are struggling end up on the path to dropping out.

But the failures of American public education aren’t just borne upon the poorest children. High school sophomores from middle class backgrounds were outperformed on the by peers in 24 other countries, and lagged behind peers in 15 countries in science literacy, according to an analysis of the 2009 Program for International Student Assessment by America Achieves. Twenty-eight percent of fourth-graders attending suburban schools read Below Basic on the 2011 NAEP, virtually unchanged from the levels in 2007; 14 percent of young men in eighth grade whose parents were college graduates were functionally illiterate, versus seven percent of young women peers. The reality is that when poor children are subjected to educational malpractice, their middle-class peers will be subjected to scholastic neglect. Providing high-quality education to our poorest kids is also key to helping all of our children succeed.

If we want to leave a legacy for our children — and generations beyond them — that are worthy of our aspirations for them, we must continue to transform American public education. This includes overhauling how we recruit, train, compensate, and evaluate teachers; as well as revamping how we select, train, and reward school leaders. It also includes the implementation of Common Core reading and math standards — as well as the development of high-quality curricula aligned with the standards — in order to provide our kids with comprehensive college preparatory curricula; expanding access to A.P. and International Baccalaureate courses, along with ending rationing of education, is also key. And we must continue to expand school choice as well as Parent Power efforts, along with developing school data systems that provide all families with information they need to make smart decisions.

The best heirloom we can all leave for our children is a better world in which they can all live. Advancing the reform of American public education is one way to make that a reality.