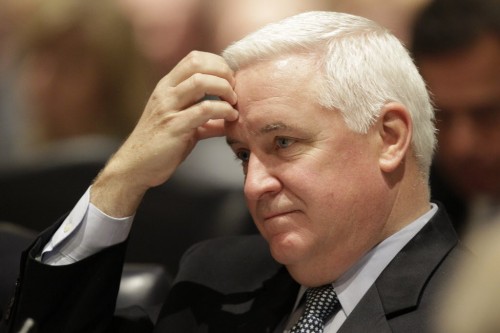 Last week, Dropout Nation took aim at Pennsylvania and Wyoming state officials for their failure to immediately disclose their initial requests to participate in the Obama Administration’s effort to eviscerate the No Child Left Behind Act and its accountability provisions. The good news this week, if you can call it that, is that the Keystone State has publicly released its entire waiver request. At least civil rights groups and reformers in the state can actually vet the plan for themselves, especially since its clear from the application that state officials spent nearly all of its time vetting the plan with districts and teachers’ union affiliates. The bad news? As your editor suspected, Pennsylvania’s proposal will do little more than set back the state’s already half-hearted effort at advancing systemic reform. And the application once again shows the consequences of the Obama Administration’s move to eviscerate the Adequate Yearly Progress provisions that have helped spur systemic reform.

As you already know, Pennsylvania is Cut the Gap in Half, the supposedly “ambitious” yet “achievable” proficiency target that replaces No Child’s aspirational goal of 100 percent proficiency for all kids. The Plessy v. Ferguson-like approach has rightly been criticized by civil rights groups and other reformers for essentially allowing districts to define proficiency down and in the process shortchange poor and minority kids. But the extent of the loss of accountability extends beyond these low expectations. Efforts to close racial-, ethnic-, and gender-based achievement gaps will only count for five percent of Keystone State school’s or district’s annual performance rating. This means that a suburban district can do poorly in improving achievement of the poor and minority children in its classrooms and still get a high rating. It’s hard to close an achievement gap when it is effectively ignored.

Outfits such as the Alliance for Excellent Education that are focused on stemming dropouts and making sure that high schools provide comprehensive college preparatory curricula to all students won’t likely be too happy that graduation rates (along with school attendance and student participation in Advanced Placement or International Baccalaureate course) will account for just another ten percent of a school’s overall rating. Considering that just 14 percent of Pennsylvania high schoolers — including 10 percent of black students and seven percent of Latino peers — took AP courses in 2009-2010, according to the U.S. Department of Education, Gov. Tom Corbett and Secretary of Education Ron Tomalis should be pushing for more doing more to force districts into providing college preparatory curricula to the kids in their classrooms.

Meanwhile Pennsylvania’s new teacher evaluation system, a key aspect of the waiver, is hardly worth the paper upon which it is written. The Pennsylvania branch of school reform outfit 50CAN gave the evaluation system some cover earlier this year when Jonathan Cetel, who runs the state operation, said it was “supported” by the Bill & Melinda Gates Foundation’s Measures of Effective Teaching Program and its emphasis on combining unreliable classroom observations with Value-Added analysis of student test score growth data. But MET’s recommendations are hardly mirrored by structure of the Keystone State’s performance management system, which will go online this coming school year.

It’s bad enough that classroom observations, which have been proven to be unreliable in measuring teacher performance in improving student achievement, accounts for half of the evaluation instrument for most teachers (and as much as 80 percent for “education specialists and licensed professionals). Even worse, the observation instrument being used is Praxis II developer Charlotte Danielson’s Frameworks for Teaching, which was rated by MET as being the most-unreliable of the four unreliable observation methods evaluated (especially in measuring instructional success in improving student numeracy). The fact that student data from tests teachers design themselves will account for as much as a fifth of the overall evaluation (while Value-Added analysis of student test score performance growth on the Keystone State’s standardized tests will account for just 15 percent of evaluations) means that instructors can game the system, effectively weakening the usefulness of the evaluations in both performance management and helping teachers improve their own performance. Calling Pennsylvania’s evaluation system shoddy and useless is just being kind.

By any sensible measure, the Obama Administration should reject Pennsylvania’s waiver plan. But given that it has blessed waiver requests that were far less complete than that being proposed by Corbett and Tomalis — and considering the slipshod nature of the U.S. Department of Education’s process for vetting proposals — it will likely rubber-stamp this plan too. This is a problem for sustaining systemic reform. Contrary to the arguments made today by Center for American Progress Senior Education Policy Analyst Robert Hanna in a brief released today, the administration’s waiver gambit has done little to encourage states to either set ambitious goals for districts and schools, and hasn’t led the vast majority of them to do anything that would spur districts to continue reform efforts (much less undertake new ones). In fact, the Obama waiver gambit discourages systemic reform by allowing states and districts to ignore poor and minority kids, rendering them invisible altogether, through such subterfuges as lumping all of subgroups into a so-called super subgroup category that obscures data on the performance of districts and schools in helping each and all kids. By allowing states to focus on the worst five percent of schools (along with another 10 percent or more of schools with wide achievement gaps), the administration is also letting districts not under watch  — especially suburban districts where poor and minority kids (as well as middle class white counterparts) — off the hook for serving up mediocre instruction and curricula. And because the waiver process doesn’t look at how states are expanding school choice or demand that they end Zip Code Education policies such as zoned schooling, children and their families are cheated out of opportunities for high-quality instruction and curricula.

Your editor encourages families, civil rights groups, and reformers in Pennsylvania to put pressure on the state to withdraw its waiver request. The Obama Administration should also stop this gambit, and get to work on a reauthorization of No Child that actually preserves much-needed accountability and expands it in order to further reform.