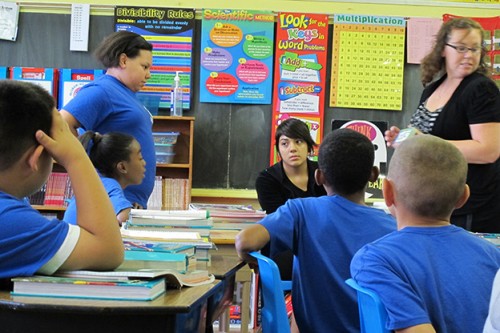 One can say plenty about yesterday’s unanimous decision by the Indiana Supreme Court to affirm the legality of the Hoosier State’s voucher program. The first? That the ruling is a clear victory for the 9,400 children and their families who currently use the vouchers to escape dropout factories and failure mills throughout the state, as well as those families still stuck with sending their kids to failure schools who will benefit from expansion of the school choice program in future years. Particularly for the families of poor and minority children, especially those previously forced to attend Indianapolis Public Schools (the worst district in the Midwest outside of Detroit) and the nearly-as-abysmal district in Gary, Ind., the Indiana voucher program is helping them provide their kids with schools fit for their futures. No family should be forced to subject their kids to educational neglect and malpractice, and they should be the lead decision-makers in the education of their children.

It will also benefit the thousands of children — especially those condemned to special ed ghettos — who may benefit from the possible passage of H.B. 1003 — currently before a state senate committee — which would provide vouchers to help those children escape the pernicious effects of special education practices within traditional district schools; uncertainty over how the court would rule had cast doubt on its passage, an issue that is no longer in the way. As Dropout Nation noted in its commentary last week, for far too long, traditional districts have used special ed as way-stations for kids who they don’t want to teach, and those kids often suffer educational as well as physical abuse through such  barbaric discipline techniques such as placing kids into so-called seclusion rooms (or, as convicts would call them, solitary confinement). Moving kids out of traditional special ed ghettos may lead to those with actual cognitive issues getting the help they need, while allowing those wrongly put into such programs to ultimately cast off the special ed labeling and get high-quality education they deserve.

At the same time, the Indiana high court’s ruling is also a victory for the school reform movement as a whole. Why? Because the ruling by Chief Judge Brent Dickson offers a road map for school choice advocates, Parent Power activists, and others to spur the much-needed transformation of American public education, especially in states which, like Indiana, provide their state governments to structure public education as broadly as they want.

In the ruling, called Meredith et al. v Pence, the Indiana Supreme Court declared that arguments by traditionalists who filed the suit that the voucher program was unconstitutional because of another state constitutional provision banning the state from funding “any religious or theological institution didn’t wash because their interpretation would also have meant that the state couldn’t either provide basic services such as infrastructure improvements from which churches and other religious institutions indirectly benefit. More importantly, previous court rulings allow for the state to fund the work of religious institutions such as hospitals run by Catholic archdioceses so long as the primary beneficiaries were the public. So long as families were receiving the vouchers and the benefit of public education, the vouchers were legal. That ruling, in turn, acknowledges the fact that state and local governments, along with the federal government, have long allowed religious organizations to serve as contractors for all kinds of public activities; As the Thomas B. Fordham Institute pointed out in a 2008 report on reviving urban Catholic schools, the federal government already pours $3 billion annually into Catholic Charities alone.

The more-important aspect of the Indiana voucher ruling comes from Chief Judge Dickson’s ruling that the state government was perfectly within its rights to launch a voucher program because the state constitution allows it to do so. As Chief Judge Dickson points out, the constitution charges the Hoosier State government with “the duty” to “encourage, by all suitable means, moral, intellectual, scientific, and agricultural improvement” as well as to provide for public schools. Under the provision, which has been in place since Indiana enacted its first constitution in 1816, the state can take “all suitable means” to ensure that all kids are provided high-quality education, and that includes providing families with school vouchers (as well as funding public charter schools). As Dickson points out, the constitution gives “broad legislative discretion” to the state government when it comes to structuring public education.

This point is especially important for reformers throughout the nation because Indiana’s constitutional provision is mirrored in one form or another by 14 other states, according to a Dropout Nation analysis. This includes Arkansas, where  the state government is required to both provide “free public schools” and “adopt all suitable means to secure to the people the advantages and opportunities of education”. There’s also California and Iowa, whose respective state governments are also charged by its constitution to “encourage by all suitable means the promotion of intellectual, scientific, moral, and agricultural improvement”. Meanwhile the state government in Kansas is required under its constitution to “provide for intellectual, educational, vocational and scientific improvement by establishing and maintaining public schools, educational institutions and related activities which may be organized and changed in such manner as may be provided by law”; reformers in that state could easily argue that the constitution essentially allows for the state to launch its own voucher program or even voucherize school funding so that it can used to provide children any high-quality school opportunity available.

This is also true in Washington State, where the state is required to both provide public education and “make ample provision for education of all children residing its borders, without distinction or preference on account of race, color, caste, or sex”, as well as in Virginia, whose constitution requires state government to provide free public schools and “seek to ensure that an education program of high quality is established and continually maintained”. In the case of Virginia, the state can launch a voucher program if it so chooses so long as it makes sure that it is provides kids with the teaching and curricula that they deserve. For school choice activists, there is ample opportunity to use the courts to force states to expand school choice, a position articulated by Dropout Nation for the past two years, and advocated by some reformers such former Heartland Institute scholar Bruno Behrend.

Even in states with constitutions that don’t have such broad language, state governments are often charged with defining public education as they see fit. In Louisiana, where the move by Gov. Bobby Jindal to voucherize state funding there as part of the expansion of its voucher program is now under high court judicial review, Article I, Section VIII of the state constitution requires the state to “provide for the education of the people of the state and shall establish and maintain a public education system”. While traditional districts, along with affiliates of the National Education Association and American Federation of Teachers, argue that the constitution bars the Bayou State from allowing private and parochial schools to participate in the state funding formula (and convinced a state judge to rule their way), reformers can argue that provision itself supersedes all others in the constitution. Which means that Jindal and the state legislature can provide a voucher program either from its funding formula or by simply adding the program to the budget as a line item (as was previously done before the expansion last year).

Meanwhile in New York, the state could launch its own voucher program just by following the terms laid out in the state high court’s ruling in the Campaign for Fiscal Equity v. New York. Since the Empire State is charged with providing  a “sound basic education” fit for kids, something that can be easily identified as not happening in many districts, it could easily voucherize funding in those districts and allow families to send their kids to any high-quality educational opportunity. Considering that one reform outfit, New York’s Foundation for Educational Reform and Accountability, have made their own call for using the courts to expand choice, activists should take up that opportunity right now.

But the provisions in these states not only just allow for expanding choice. Parent Power activists can argue that the constitutional provisions charging states with providing public education — along with federal education policy through the No Child Left Behind Act and the U.S. Supreme Court’s ruling in Hunter v. Pittsburgh— invalidate Zip Code Education policies such as school zones and school residency laws that have been used by districts such as Montgomery County in Pennsylvania to prosecute Philadelphia residents  Hamlet and Olesia Garcia (as well as other laughable stealing education cases such as those pursued against Kelley Williams-Bolar and Tanya McDowell). This is because under those provisions, districts are merely arms of state governments and must operate under the rules states set. Particularly in the case of the Garcias, their defense attorney could use argue that Montgomery County’s school residency restrictions violate’s Pennsylvania’s constitutional requirement that state government handles the “maintenance and support of a thorough and efficient system of public education”. This, by the way, also means that families can also file suits to take over failing schools in their communities, essentially launching their own Parent Trigger actions even if they aren’t in any of the seven states with such laws on the books.

For other reformers, the fact that these provisions put states in charge of education once again reveals that the myth of local control (in the form of traditional districts and their boards) is exactly that. This certainly isn’t comforting to traditionalists opposed to all efforts at systemic reform, or to the cadre of traditionalists, movement conservatives, and otherwise-sensible conservative reformers opposed to the implementation of Common Core reading and math standards. But for reformers, the provisions provide them ample opportunity to pursue legislative and even legal efforts to advance reform. The cadre of reformers in California suing the Golden State over its shoddy teacher evaluation system, for example, can use the constitutional provision to force Gov. Jerry Brown and Supt. Tom Torlakson to implement provisions requiring the use of objective student test score growth data in teacher evaluations; one can argue that the provision even invalidates another constitutional rule restricting the state from imposing “unfunded mandates” on districts and local governments because they are merely tools of the state itself.

The Indiana voucher ruling offers new opportunities for reformers in other states to help families take their rightful place as lead decision-makers in education, as well as spur the overhaul of American public education itself. It’s time to take the legislatures and the courts to make those reforms a reality for our kids.

New Jersey's Takeover of Camden: A Step Toward Ending the Myth of Local Control