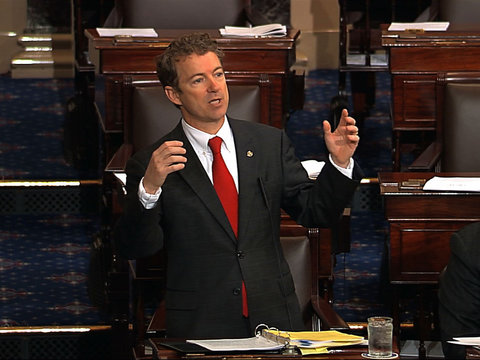 Opponents of the U.S. Senate tradition of the filibuster — or the extensive debate on the floor of the federal upper house geared toward preventing a vote on legislation or confirming a presidential appointee — certainly don’t welcome Sen. Rand Paul’s move today to exercise that privilege to prevent what would certainly be the speedy confirmation of John Brennan as Director of the Central Intelligence Agency. Besides the fact that the Kentucky Republican is opposing President Barack Obama’s preferred selection for the post — and that Paul’s challenge is in many ways the latest in the partisanship that has made it difficult to move even meaningful legislation (even if it has done the wonderful job of stopping both Republicans and Democrats from indulging in their worst impulses) — it runs counter to the idea among many that government should efficiently do its business, whether or not some of those activities are constitutional or moral. As New York Times editorialist David Firestone has proclaimed in his own anti-filibuster screed today, opponents of the filibuster believe that smooth operations of government are “more important” than what they feel is one of “the Senate’s hoary anti-democratic prerogatives”.

Yet contrary to Firestone’s arguments and that of his fellow-travelers, Paul’s filibuster is a great example of democratic republicanism in action. Why? Because democratic government isn’t just about the rule of either the majority or a majority-elected administration or even about the efficient operation of government. Because government has an obligation to serve all people — especially the minority, who can be subjected to the whims of government officials in the majority — the minority have the right and the ability to demand answers from presidents as well as stop executive branch action that may not be constitutional. When one keeps in mind the numerous instances when majority rule sustained such inhumane and unconstitutional practices such as slavery and Jim Crow segregation — as well as moments when presidential decisions such as the internment of American citizens of Japanese descent and the Tuskegee experiments have gone unquestioned — the filibuster remains a practice that is valuable to the preservation of democratic republicanism. Especially when one considers that the only time anyone opposes the filibuster is when they are the party (or the coalition) in power, and thus, their goals are being subjected to it.

The questions Paul has raised during his filibuster about the Obama administration’s abuse of power (and that of predecessor George W. Bush) in the foreign policy (and even domestic intelligence) arenas, especially in the use of drones to murder innocent lives in Afghanistan, are legitimate. President Obama should answer them, and do so honestly. At the same time, Paul can ask a few questions of the administration on its effort to eviscerate the accountability provisions of the No Child Left Behind Act by allowing 34 states and the District of Columbia to ignore those aspects of the law. Given that Paul is neither a fan of No Child nor supportive of a strong federal role in spurring systemic reform, one wouldn’t expect Paul to defend the law. At the same time, the fact that the Obama administration’s move to allow states to ignore whole provisions of the law is legally questionable — especially since it is in the mind of some stepping over the line into the role of making law reserved only for Congress — should give Paul plenty of reasons to call Obama and U.S. Secretary of Education Arne Duncan on the carpet.

One question Paul can ask Obama and Duncan? What kind of standard is the U.S. Department of Education putting in place as part of its process for approving revamped teacher evaluation systems states are required to put in place in exchange for receiving a waiver? This is an important question because it appears that the Obama administration is essentially allowing any evaluation system to gain its blessing long as it has unspecified use of longitudinal student test score growth data as one of the main components. While some of the 12 state-level evaluation systems approved by the administration so far require test score growth data to count for between 20 percent and half of overall evaluations, other states such as Massachusetts are being allowed to put in place evaluations that don’t specify test data as a percentage of teacher performance management measures. Paul could easily argue that the federal government shouldn’t be involved in setting such requirements in the first place; this a point on which your editor would disagree, since, after all, the administration is allowed to hold states accountable for any dollars it receives from federal coffers. At the same time, the very arbitrariness of the how the Obama administration is handling this aspect of the waiver gambit — one of many examples of the Department of Education simply basing policy on whatever it sees fit — makes it difficult for the administration to say it is holding all waiver states to one common standard.

The question of standards for approving evaluations is especially important given the slipshod manner in which the Obama administration has conducted the waiver gambit. It has granted waivers to states such as Ohio and Oregon even when they haven’t fully implemented accountability or teacher evaluation systems promised in their submissions. The administration has also ignored red flags raised by peer review panels it has put in place to vet the submitted proposals — including concerns that states didn’t present their proposals to American Indian tribes as required under both the waiver process (as well as under federal and state laws), and that D.C.’s plan for implementing Common Core reading and math standards was not “realistic and of high quality”. Add in embarrassments such as approving Virginia’s waiver request — which allowed the Old Dominion to define expectations and levels of proficiency down for poor and minority kids in a way that evokes Plessy v. Ferguson — and nothing good can be said about how the Obama administration has handled the waiver gambit so far.

Question number two should be how will the Obama administration address the various waivers already in place once it fully engages with Congress on a reauthorized version of No Child? As the Center on Education Policy noted in its recent survey of states granted waivers under the gambit, there is already fears that they will have scotch the accountability systems they put in place after receiving the waivers and start all over again under a new version of the federal education law. As Dropout Nation has noted ad nauseam, few of the  accountability systems allowed to replace No Child’s Adequate Yearly Progress provision are worthy of the name; far too many of them, including the A-to-F grading systems put into place by such states as New Mexico (as well as subterfuges that group all poor and minority students into one super-subgroup) do little to provide data families, policymakers, teachers, and school leaders need to help all students get high-quality education. At the same time, by blessing these cacophony of systems instead of simply sticking with AYP, the Obama administration has created the possibility of more chaos once Congress finally moves toward some form of reauthorization.

Given that the Obama administration has caused this mess, it would make sense that it try to clean it up in a responsible manner by immediately pursuing a reauthorization that strengthens and expands accountability as much as politically possible. This would minimize the chaos that will come once No Child reauthorization happens. In any case, Paul can easily tie the administration’s mishandling of this matter to how poorly it has dealt with issues on the foreign policy front.

Finally, there is the question of what will the Obama administration do when those state granted waivers cannot put their promised reforms in place? This is already an issue in New York State, where districts such as New York City and Buffalo cannot get American Federation of Teachers affiliates to agree to implementing the Empire State’s modest performance-based teacher evaluation system. Sure the Obama administration can decide to withdraw the waiver. But that would require a level of discipline that the administration has yet to demonstrate in a meaningful way. And considering the sloppiness of the Obama administration’s handling of the waivers thus far, no one in Congress can reasonably expect it to hold states accountable in any way — especially since it can be argued that the waiver gambit itself is legally questionable in the first place.

Your editor doesn’t expect Paul to even give No Child one thought. But since he is actually doing the right thing in demanding the Obama administration to answer some important questions on how it deals with the use of force in conducting war, it would make sense to ask how the administration is also mishandling an important aspect of education policy.

The Good News - and Tough Lessons - for Reformers from the L.A. Unified Board Elections