The Obama No Child Waiver Gambit: It’s Time for It to End

RiShawn Biddle
2 Comments on The Obama No Child Waiver Gambit: It’s Time for It to End 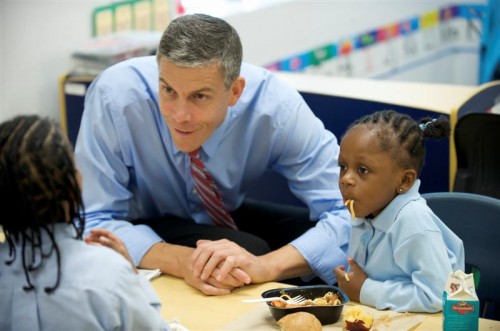 A few things are clear after today’s Senate Health Education Labor & Pensions Committee hearing on the Obama administration’s move to eviscerate the accountability provisions of the No Child Left Behind Act. And, for the most part, it didn’t reflect well on the gambit.

While U.S. Secretary of Education Arne Duncan did his best to spin the administration’s efforts as a solution for No Child’s supposedly “broken” accountability measures, which he proclaimed, was “misleading” in identifying schools and districts — especially in suburbia — failing  to provide high-quality education to poor and minority kids. Yet as Dropout Nation (along with some centrist Democrats such as Andy Rotherham) have pointed out, Duncan’s previous statements on this front — including the declaration that as many as 90 percent would be found failing — have not stood up to scrutiny. The education secretary’s proclamations that the waiver gambit has led states to bolster curricula standards — notably through the move by 45 states and the District of Columbia to enact Common Core standards — may seem so on its face. But the fact that the administration has blessed moves by states such as Tennessee, Florida, and Virginia have enacted race- and class-based socioeconomic targets (including the so-called Cut the Gap in Half approach structured by the Education Trust) that define proficiency down as well as damn poor and minority kids to low expectations also proves lie to Duncan’s statement.

Duncan’s declaration that No Child’s Adequate Yearly Progress provisions has rendered students, especially those condemned to special ed ghettos, invisible because it didn’t allow for the capturing of those students if they were not considered significant population groups in their schools fails to note that such a problem could have been adjusted by the administration through a limited waiver that covered that issue (and unlike the waiver gambit it did undertake, wasn’t legally questionable because it allows states to ignore whole sections of federal law). More importantly, in making that argument, Duncan essentially argues against the overwhelming evidence that AYP actually led to revealing how poorly districts — especially those in suburbia — were failing in providing high-quality teaching and curricula to poor and minority kids. In fact, it is that very scrutiny that has led so many suburban districts to join alongside National Education Association and American Federation of Teachers affiliates (as well as other traditionalists) to complain about No Child in the first place; they didn’t want to be held accountable for serving up mediocrity to the kids they have subjected to educational malpractice for far too long.

In fact, the Obama waiver gambit has actually allowed states to ignore poor and minority kids, rendering them invisible altogether, through such subterfuges as lumping all of subgroups into a so-called super subgroup category that obscures data on the performance of districts and schools in helping each and all kids. By allowing states to focus on the worst five percent of schools (along with another 10 percent or more of schools with wide achievement gaps), the administration is also letting districts not under watch off the hook for serving up mediocre instruction and curricula.

Further evidence of how the Obama administration’s waiver gambit is rendering poor and minority kids invisible is clear after one reads through the Education Trust’s latest report, which partial reverses its support for the waiver gambit (and largely disavows its troublesome role in helping the administration, as well as Florida, in instilling Plessy v.Ferguson-like accountability targets). While some states are using so-called multiple measures such as performance on Advanced Placement tests as part of accountability measures, they aren’t looking at subgroup performance, essentially ignoring how well or poorly districts are doing in providing kids with strong comprehensive college-preparatory curricula. Because the Obama administration didn’t explicitly demand states to set targets for improving graduation rates or required them to tie those goals to proficiency targets, most states simply the key goal of ensuring that poor and minority students graduate from high school, the first step towards lifelong success. Arkansas, Connecticut, Delaware, Georgia, and Maryland are the only states to do so.

Add in the fact that waiver states only had to focus on the worst-performing five percent schools along with schools with wide achievement gaps (and ignored the mediocrity of the remaining 85 percent of schools), and it is clear, as EdTrust President Kati Haycock declared today, that the administration’s gambit “invited [states] not to actually make those goals meaningful for the vast majority”

Meanwhile the waiver gambit also isn’t doing much to help poor and minority kids escape dropout factories and failure mills. Just six states — Arizona, Colorado, Michigan, New York, Oklahoma, and South Carolina — offer kids in failure mills the opportunity to transfer to better-performing schools. The waiver gambit also failed to coax states into expanding choice and didn’t push them into passing Parent Trigger laws that would allow families to take control and overhaul the failure mills in their own communities.

When it comes to the No Child waiver gambit, it is hard to take Duncan’s statements seriously, especially after he disavowed statements by his own staff that the administration was considering granting a special waiver to a compact of eight California districts looking to evade No Child’s accountability measures (and not be shackled by the intransigence of Golden State officials, who unsuccessfully pursued a waiver on their own terms). Your editor is surely pleased that Duncan has decided to avoid such as waiver, at least for now. But for those districts, including Los Angeles Unified, this statement must make them wonder if they can trust any message coming out of the administration.

Simply put, the Obama administration’s declaration that the waiver gambit is better than No Child is about as believable as a sighting of Sasquatch. But Duncan wasn’t the only one offering up rather baseless statements.

Sen. Lamar Alexander, the one-time reformer who is now the Ranking Minority Member on the Senate committee, constantly attempted to argue that there was no need for a strong federal role in education policy. His essential declaration that states can be the laboratories of innovation in education reform — a line tossed around by far too many movement conservatives without much knowledge about the history of American public education (as well as conservative reformers who know better) — fails to realize that for most of the last 150 years, states haven’t actually done any of that. Save for a few instances, such as the initial efforts of Southern governors (including Alexander during his tenure as Tennessee’s governor) and chambers of commerce during the 1970s that spurred what became the modern school reform movement, it has been the federal government that has been the driving force in coaxing states to take full responsibility for the districts they control as part of their constitutional provisions requiring them to provide education.

It was the National Defense Education Act of 1958 which led to the first wave of standardized testing that now allows for states to develop teacher evaluations that actually help high-quality teachers get the recognition they deserve and remove those who don’t belong in the classroom. Twenty-five years later, the groundbreaking 1983 report A Nation At Risk, prepared at the request of the Reagan Administration, that led to the formation of 250 state and local panels focused on developing the first wave of teacher quality reforms, the development of curricula standards, and the second wave of standardized testing. While some states such as Minnesota, Wisconsin and California began embracing the expansion of choice through the passage of charter school laws as well as the launch of voucher programs, it was the move by the Clinton administration during the 1990s to make charters a key part of federal education policy that helped spur states to expand choice in their own states. And the Obama administration’s more-laudable Race to the Top initiative has done the same thing by pushing states to either eliminate or reduce artificial restrictions on the number of charters, the launch and and expansion of vouchers and tax credit programs in more than 15 states in the past few years, and the passage of Parent Trigger laws in seven states.

In fact, one of the least-acknowledged facts about No Child is that it actually gave reform-minded governors, state school chiefs, and legislators the leverage they needed to beat back opposition from traditionalists. By signaling the reality that states, not school districts, control the direction of education (which was already made clear in state constitutions, in the fact that states account for 48 cents of every dollar spent on schools, and in the Hunter v. Pittsburgh ruling, which regards districts and other local governments are merely tools of state control), No Child made it easier for reform-minded governors to do their work by proclaiming that the federal government was making them do it. Given the role of NEA and AFT affiliates as prime campaign financiers of state legislative campaigns, along with the fact that districts are often the centers of political power in southern states, the federal lever is critical to advancing systemic reform.

This is especially true when it comes to revamping how teachers are recruited, trained, evaluated, and paid. As New York State Education Commissioner John King rightly pointed out, the federal government can help states set the high bar for developing teacher evaluation systems that actually do what they are supposed to do. While the No Child waiver gambit hasn’t exactly helped on this front, largely because they don’t have the force of law that comes with legislation passed by Congress, a new version of No Child can do so if the focus is on expanding accountability.

All in all, it is clear that neither the Obama administration nor some senators are serious about doing so. Which may make Bellwether Education honcho Andy Smarick’s argument for not undertaking any effort to reauthorize No Child a sensible one. And given how poorly the Obama administration has handled the waiver gambit, it’s time for Duncan and President Barack Obama to abandon it altogether.