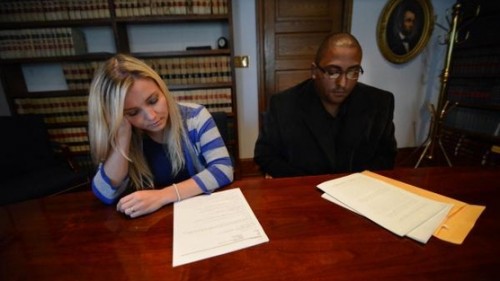 For an illustration of the ridiculous of families facing criminal charges for the laughable non-offense of “stealing education” — and end Zip Code Education policies such as restrictions on inter-district choice that perpetuate these problems — consider the case of Hamlet and Olesia Garcia of Philadelphia.

Hamlet and Olesia, insurance agents who own their own firm, had placed their daughter into an elementary school, Pine Road, that was next door to their home — and across district lines — in the Lower Moreland Township district last year after the couple had separated. This shouldn’t have been a problem. After all, Olesia had moved in with her father, who lived in the district and through his property taxes, was paying plenty into its coffers. But when Olesia moved back with her husband two months before the school year ended, the Garcias kept their daughter in the school so she could finish out the year because, like most caring parents, they wanted to do their best to provide their child with a stable (and high-quality) school culture.

But since September, the Garcias have been battling with Lower Moreland and the Montgomery County District Attorney, both of which have apparently decided to make an example of the family for daring to send their kid to school. Despite the taxpaying status of Olesia’s father and the fact that the Garcias even offered to pay back the district for the those last two months — and even pay the district to keep their daughter in that school for this school year (the daughter is now attending a private school), the Garcias now face criminal theft charges (and the dire consequences that come with conviction) for an act that hardly merits either an indictment, or the expense Lower Moreland spent to hire a private investigator to look into the family, or even the costly prosecution being pursued.

Hamlet and Olesia can at least say they have folks on their side. Within the last couple of months alone, Democrats for Education Reform (and the head of its California branch, Gloria Romero), Connecticut Parents Union President Gwen Samuel, and other Parent Power activists have jumped into the fray. They, in turn, have brought the harsh spotlights of national media outlets to bear on how Lower Moreland (which has few Latino or black students in its enrollment) has only pushed to prosecute the family of one of the few minority kids that had attended its schools. [Dropout Nation, being supportive of the Garcia family, asks you to sign this Change.org petition, or call up Montgomery County D.A. Risa Vetri Ferman at 610-278-3090 to demand that the charges be dropped.]

Certainly the Garcia’s case isn’t similar to that of Kelley Williams-Bolar, whose conviction for stealing education attracted national attention last year or that of Connecticut grandmother Marie Menard. Nor is their case that similar to Annette Callahan, the Waukegan, Il., mother of five whose effort to provide her youngest two children with high-quality education led to a battle with the Beach Park district over sending her kids to its schools, even though her ex-husband was a taxpaying resident there. And clearly  the Garcias don’t face the same plight as Tanya McDowell, the homeless Bridgeport, Conn., mother who will spend the next five years of her life in the Nutmeg State’s York Correctional Institution for sending her son to a modestly-better school in the Norwalk district.

At the same time, Hamlet and Olesia are no different than Kelley, or Marie, or Annette, or Tanya in their pursuit of providing the kin they love with brighter futures. This included making sure that their daughter stayed in a nurturing school environment even as they themselves struggled to deal with the strain that comes with marriages facing trouble. Pine Road Elementary was not only the neighborhood school for Olesia’s daughter while she and her mom were living with her grandfather, it is also two miles away from the home in which her dad still lived (and much-closer than William A. Loesch Elementary, the Philadelphia district school the daughter had previously attended); so sending their child to Pine Road assured that their daughter would still be able to see both her parents even if they were no longer together. Given how close Pine Road was to Hamlet and Olesia’s home (further away by just a mile or so, than Loesch), the very fact that a family’s school choices are restricted by boundaries — especially when as taxpayers to Pennsylvania’s state government, they finance  Lower Moreland’s budgets, also makes the district’s efforts to prosecute the family even more laughable.

All in all, the Garcia case once again shows why we must put an end to archaic Zip Code Education policies that restrict families (especially those from poor and minority backgrounds) from providing their kids with high-quality education.

In many ways, stealing education prosecutions are just manifestations of this longstanding opposition among district bureaucrats and other traditionalists to expanding school choice, and their desire to maintain their preferred approach to American public education. From where they sit, expanding choice will lead to the end of public education as they prefer it (government-run, no private-sector or parochial school players, and uninterrupted funding whether or not they do the job of improving student achievement). The very idea that families are capable of making smart decisions for their kids if given high-quality data, and should be lead decision-makers in education, also disturbs them. After all, they distrust families, and think that only they, the supposed experts, should decide which kids should get highly effective teachers and comprehensive college-preparatory curricula. This desire to keep control over funding and policy (along with the long-term fiscal crises resulting from decades of feckless spending) is one reason why districts hire investigators to keep tabs on families they suspect are attending schools outside of their boundaries. It also explains why districts in Louisiana (along with affiliates of the National Education Association and American Federation of Teachers) to kibosh the Bayou State’s school voucher program, and traditionalist-minded school leaders in Michigan are up in arms over  Gov. Rick Snyder’s push to overhaul school funding.

But this opposition to expanding choice (along with the stealing education prosecutions that partly emerge from it) wouldn’t be such a problem if not for the hemming and hawing among states about taking over the full funding role that they need to undertake in order to make choice and other reforms a reality. Thanks to decades of battles over equal funding of schools and efforts at property tax relief, states now provide the plurality of all school dollars, accounting for 48 percent of all school revenues nationwide. Pennsylvania is an exception, with the state only providing 36 percent of school funding (and less than a fifth of Lower Moreland’s revenue). States could easily pave the way for choice by replacing all local funding with state dollars, essentially turning the dollars into vouchers that follow every child to whatever school, public, private or parochial, they so choose.

Yet save for a few — including Snyder, Louisiana’s Bobby Jindal, and outgoing Indiana Gov. Mitch Daniels — governors and legislators haven’t fully embraced moving towards full state funding. This reticence exists even though it isn’t that hard to do politically, and can be done as part of an effort to reduce property taxes (half of which usually are poured into the coffers of traditional districts). But because state leaders aren’t willing to do so, this stalemate allows districts can justify opposition to school choice; after all, they can oppose school choice because they still collect local property tax dollars and parents outside their boundaries don’t provide those funds (even though they are financing the same schools through their state income taxes). At the same time, the districts can even deny choice to the children they are supposed to serve by continuing zoned school policies.

The consequences are borne by four out of every five children and their families, who have no access to school choice, and are thus stuck with whatever is offered in traditional districts. Especially for poor and minority families, this means subjecting their kids to educational neglect and malpractice that endangers their futures. This unwillingness to overhaul school finance also perpetuates one of the tenets of the Poverty Myth of Education held so deeply by so many education traditionalists: That poor and minorities don’t share the same interest in providing their children with a high quality education as they do, and won’t do whatever it takes to help their kids succeed. This racialist and condescending notion never considers the reality that for these families, simply moving from one zip code to another can be economically impossible — and given that districts often arbitrarily change their zoning policies, even moving residences doesn’t guarantee high-quality school options.

But it isn’t just an academic problem. As in the case of the Garcias (and for McDowell), even those families who want to structure education in ways that ensure their children have stability — even when circumstances aren’t necessarily so great — are also stymied by Zip Code Education policies. Considering that marital discord and splits has always been a part of life even before the turmoil unleashed by divorce laws in the 1960s (legendary business titan John D. Rockefeller was himself the product of a single-parent home), ending Zip Code Education policies can help families do all they can to shelter their kids from the storms of life. American public education shouldn’t make it harder for parents to do what’s best for their children.

Lower Moreland and Montgomery County should cease their prosecution against Hamlet and Olesia. More importantly, reformers should use the Garcia case (and that of Kelley, and Tanya, and Annette, and Marie) as an opportunity to expand choice by overhauling school funding. And this will help all families provide high-quality education to our children.

The NAACP's One Step Forward on School Reform

More on the NEA's Disclosure: $5 Million into California Political Campaigning