The Louisiana School Choice Ruling: An Opportunity for Reformers to Redefine Public Education 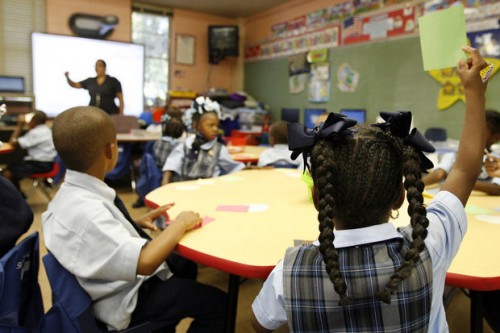 There’s plenty to say about today’s ruling by Louisiana District Court Judge Tim Kelley striking down the school voucher program expanded by Gov. Scott Bobby Jindal earlier this year. And not just that the leaders of the American Federation of Teachers’ Bayou State affiliate and the traditional districts that filed the suit have proven wholeheartedly that they are more-concerned about protecting the policies and practices that enrich them than the children whose genius deserve better.

The first? That Jindal, Supt. John White, the Institute for Justice, and Black Alliance for Educational Options will appeal the case. The second? That school choice activists shouldn’t panic yet. As wrongheaded as the decision may be, the 4,900 children who the voucher program has helped escape the worst American public education offers will likely be able to stay in school until the end of the school year; neither the AFT nor the districts trying to deny these kids high-quality educational opportunities want to suffer a public relations hit by demanding that the children go back to failing schools right now.

Considering that Jindal and state legislators could fund the voucher program by simply making it a line item in the state budget (as it has in previous years when it was merely serving students stuck in failing schools in New Orleans), the state could keep the voucher program alive. This may subject it to the whims of budget cuts, but then, Jindal must then be a leader and defend it during those tough fiscal times. The state has attendance data in hand, so it can divert the per-pupil amount that would have otherwise gone to a district whose former students are participating in the voucher program. This would certainly be constitutional under any circumstance — and could achieve the same goals to the chagrin of traditionalists.

Then there is the fact that Jindal, White and Institute for Justice have a solid case upon which to base an appeal. Judge Kelley argues in his opinion that the voucher program is unconstitutional because the minimum foundation program school finance system can only finance traditional public schools and the definition of public schools is “plain and unambiguous” in the Bayou State’s constitution. A closer reading of the constitution itself shows that it is anything but. For example, Article VIII, Section 9, which Kelley uses as a basis for striking down the program, only says that the state legislature can create districts and the boards that oversee them. Section 10, which was also used by Kelley to justify his ruling, only notes that districts are subjected to state oversight (as well as defining the procedures for consolidating school districts, and who can serve on the boards of two particular districts).

While Kelley attempts to argue through the use of state constitutional convention transcripts the original intent of the authors, the reality is that the constitution is rather vague on what a public education system is, and thus, the state legislature and governor can redefine what public education is to include a wide range of educational opportunities. Given the vagueness of the constitution, along with the fact that Louisiana is one of the few states that doesn’t have a religious bigotry-driven Blaine Amendment in its constitution, and that the Bayou State already funds charter schools (which would not be allowable based on Kelley’s interpretation because they are operated by private and nonprofit organizations), Jindal can make a strong (albeit limited) case to the state supreme court that the voucher program is constitutional, and that state government has already been given plenty of leeway to define public education as it sees fit.

But this opportunity to use the courts to redefine American public education is not just limited to Louisiana alone. As I noted earlier this year, all state governments are charged by their constitutions with providing  “free public education” in one form or another, from deciding how education should be financed to how it should be delivered to children and families. Because of this latitude inherent in the role of states as the ultimate overseers and providers of education, reformers can work closely with reform-minded politicians to reshape public education from a collection of bureaucracies to a system in which high-quality opportunities are financed for all children. For those states such as Louisiana where there are no clear restrictions on financing vouchers and other forms of choice, this means far more latitude than traditionalists are willing to admit. As the U.S. Supreme Court has made clear in Hunter v. Pittsburgh (and as the federal government has also emphasized in the No Child Left Behind Act), districts are merely arms of the state, and therefore, have no ability for independent action outside of what state governments decide.

For 15 states, where the constitutions require them to encourage and promote educational opportunities and the development of knowledge “adequate” educational opportunities for children, reformers could argue in court that those clauses do allow for the existence of school vouchers  and voucher-like tax credit plans that allow private-sector firms to start their own voucher programs in exchange for tax breaks. In Illinois, for example, the state is required to finance “the  system of public education”, essentially allowing for the possibility of vouchers; same in Georgia, where the state is called to provide an “adequate” education system, which can include financing public schools and offering vouchers.

School choice activists and other reformers in the rest of the nation must also mount much-needed challenges to Blaine amendments  originally crafted by Know-Nothings and other religious bigots during the 19th century to prevent Catholic schools from receiving state dollars. As Dropout Nation has argued for the past two years, the laws are as bigoted (against religion) as Jim Crow laws put in place after the end of Reconstruction to deny civil liberties to black men and women; the laws also perpetuate the Zip Code Education policies that restrict families from accessing high-quality education — and thus help perpetuate the nation’s education crisis.

Reformers can actually take a page out of Judge Kelley’s book — and that of the legendary Thurgood Marshall in his successful litigation work that led to the Supreme Court’s Brown v. Board of Education ruling — by pointing to the bigoted original intents of those who crafted the amendments, then point out how those amendments are violations of other clauses in respective state constitutions. Lawyers for school choice advocates and Parent Power activists could also argue that the Blaine amendments also violate a state’s “affirmative obligation” to meet its obligation to provide adequate education.

But as seen in Baton Rouge today, reformers can’t rely on courts alone. They must work also work to redefine education starts with states finally taking their rightful roles by fully funding education and ending the use of property taxes to fund district operations. The fact that Louisiana districts successfully argued that the voucher program would take local dollars from them because the state’s funding formula requires a local contribution points to Dropout Nation‘s contention that districts will use their dependence on local property taxes to justify their opposition to expanding any form of choice. Reform-minded governors and legislators must take steps such as that done by Indiana and California — as well as being attempted on a slightly lesser scale by Michigan Gov. Rick Snyder — and make states the primary source of school funding.

Another step is to force amendments of state constitutions to eliminate those provisions. While this was done unsuccessfully by reformers in Florida earlier this month with the effort to pass Amendment 8. But much of the problem with the effort lied with the unwillingness of school choice advocates to hit upon the ugly bigotry wrapped up in that state’s Blaine amendment (and thus appealing to the religious sensitivities of voters, most of whom are church-going). The fact that Amendment 8 supporters didn’t show how allowing school funding to be used for a wide array of educational opportunities would help both urbanandsuburban voters provide their kids with the kind of school environments they want for them likely also played a part in the proposal’s defeat. School choice activists and other reformers must learn from how reformers in Georgia successfully passed Amendment 1, which allows the state to authorize charter schools. Like the rest of the movement, they must master the political ground game, which, given the success of the school choice movement in appealing to urban and even some suburban families, shouldn’t be hard to do.

Certainly today’s ruling is disappointing. Every child, especially the Bayou State’s poorest kids, should not have to be stuck in dropout factories and failure mills that do little more than harm their futures. But this isn’t a time to bemoan a judge’s decision. It is time to take strong action, both in Baton Rouge and across the nation, to continue the much-needed overhaul of American public education.

The NEA's Latest Disclosure: $125 Million to Preserve Its Influence