Time to Accept the New Normal in American Public Education (Or Why California’s Prop. 30 Should Go Down)

RiShawn Biddle
5 Comments on Time to Accept the New Normal in American Public Education (Or Why California’s Prop. 30 Should Go Down) 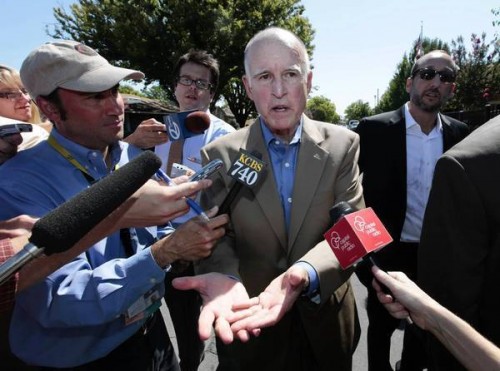 If one just listened to Gov. Jerry Brown and his fellow education traditionalists, one would think that the education spending increase plan contained in Prop. 30, which will be considered by voters next week, is the solution for the crisis of low educational attainment that plagues the Golden State (and other parts of the nation). Such statements are especially seductive when pared with pithy comments such as that California spends per inmate on incarceration than it does on every kid attending school in the state. So it is seems to make sense to increase sales and income taxes by another $50 billion in order to boost education funding.

But such faulty logic fails to consider that there are far fewer inmates in Golden State prisons (169,413, according to the Pew Center on the States) than there are students (6.2 million based on data from the state’s education database), thus one will yield larger per-prisoner spending numbers than a per-pupil spending counts. More importantly, Prop. 30 supporters fail to consider that California’s traditional public schools hardly lack for funding. The real problem lies with policies and practices — including defined-benefit pensions and near-lifetime employment — that do little to reward high-quality teachers or help students get good and great instruction, and a shoddy system of education governance that hinders systemic reform.

Education spending in California increased by 24 percent 2001-2002 and 2009-2010, according to Dropout Nation‘s analysis of U.S. Census Bureau data — even as the number of students has increased by just seven thousandths of one percent, and student performance . Breaking it down, it means that Golden State taxpayers spent $11.4 billion more on education in 2009-2010 than it did nine years earlier. Seventy-four percent of that increase was consumed by traditional teacher compensation (and compensation for support staff, many of whom aren’t actually working in classrooms). This includes a 49 percent increase in spending on teacher benefits during that period  — $2.5 billion more in 2009-2010 than nine years earlier — and a 79 percent increase in spending on bennies for support staff that added $1.9 billion to the tab. In fact, the $4.4 billion increase in benefits has accounted for nearly as much of the hike in school spending within the last nine years as the 16 percent increase in teacher salaries, and the 18 percent increase in support staff salaries (which account for another $5 billion in spending increases). With so much of the increases in benefit spending going to shore up the woefully underfunded state Teachers Retirement System, whose pension deficit has increased by a 24-fold in that period — and to compensate retiring Baby Boomers who will draw from the pension system (as well as even worse-underfunded retired teacher healthcare plans), the billions being spent now is doing little for either students or younger teachers on the payroll.

Speaking of salaries: Considering that California has yet to overhaul how traditional districts compensate teachers and measure performance — including using student test score growth data in teacher evaluations (an effort stopped by Gov. Brown last year when he put the kibosh on development of the admittedly-troubled CALTIDES teacher data system) — it is unlikely that good and great teachers have garnered all of the benefits from those spending increases. Considering that the average tenure of a Golden State teacher remains at around 13 years, younger teachers with strong subject-matter competency and demonstrated success in classrooms also aren’t benefiting from spending increases. Given that far too many poor and minority California kids aren’t being taught by a high-quality teacher, and seniority-based protections that are quality-blind and thus, do more to protect laggards than reward high-quality counterparts, it is also clear that this additional $5 billion spent by taxpayers is also being wasted.

This wouldn’t be the case if Gov. Brown and the Democrat-controlled state legislature stood up to the Golden State’s National Education Association and American Federation of Teachers affiliates. But as proven earlier this year, when the two unions successfully pushed legislators to abandon Senate Bill 1530, which would have made it easier for districts to toss out instructors who were accused of criminal abuse of children, one cannot expect state officials to do the right thing by taxpayers, good and great teachers, or children.

All things considered — especially given that the proposal does little to address the education crisis plaguing the state other than throwing money at it — why should taxpayers vote for Prop. 30?

This isn’t the only problem with Brown ‘s borrow-from-Peter-to-pay-Paul plan. Prop. 30 doesn’t end the use of categorical funding (under which a quarter of all state dollars are doled out to states under 60 or so restrictive programs), thus preventing districts from using dollars in smarter, more-efficient ways. Although the state moved three years ago to allow districts to use funds from 40 of those programs in ways that could improve student achievement, the fact that they account for la mere 40 percent of funds given through categorical funding, along with the reality that the dollars aren’t handed out based on the actual needs of students, means that districts are still hamstrung in how they can leverage existing funds. This fact, in turn, hits upon another problem that Prop. 30 doesn’t address: That California arbitrarily hands out dollars based on an arbitrary formula driven by the state’s peculiar system of elementary, junior high, and high school districts, not on the actual needs of students. For example, districts that only serve high schoolers tend to get more dollars from categorical funding than those serving elementary- and middle school students, despite there being little difference in the needs of students at each level. It is one reason why some districts spend far more than others, in spite of the fact that California, along with Indiana, is the only state that fully (or almost completely) funds K-12 schools.

Prop. 30 also doesn’t address the Golden State’s sprawl of more than 1,200 districts, county-based school agencies, community colleges, and state education agencies, whose bureaucracies and competing priorities are as much a reason why the state wastes so much revenue (and has accomplished little in building the kind of longitudinal data systems that are now the norm in California and some other states). Eliminating any of the layers of government, as the state did last year in abolishing local redevelopment agencies, would do plenty to improve public education in the state. But only if Brown and legislators take on the state’s educational ancien regime, and NEA and AFT affiliates. Again, expecting this to happen is unlikely.

Meanwhile Prop. 30 does little to even advance the one good idea on education Brown has had since returning to the state’s chief executive office: Moving to a voucher-like weighted student funding formula under which the state would spend at least $5,000 on each student (and even more based on levels of poverty and whether a student is an English Language Learner). Because Prop. 30 perpetuates the fiction that money is the elixir for the failures of traditional public education, its passage will do more to  convince legislators and status-quo defenders to stay the course than to embark on systemic reforms our children in California need.

Simply put, Prop. 30 should be voted down. In fact, it should have never been proposed in the first place. But the fact that education traditionalists, along with some within the school reform movement who should know better, want to toss good money after bad isn’t exactly shocking.

The idea that systemic failure can only be solved with more money has long been a mantra within American public education, even amid evidence to the contrary. Much of this is driven by NEA and AFT affiliates, whose decades-long deals with states and districts to make teaching the best-compensated profession in the public sector (and the one most-insulated from any form of performance management) have helped increase the burdens borne by taxpayers. The average state spends 35 cents on benefits for every dollar of teacher salary in 2009-2010, 10 cents more than spent nine years earlier, while states spend $8 billion annually on wages increases for teachers who attain master’s degrees in spite of evidence that degree attainment isn’t correlated to improvements in student performance. The consequences of such wasteful spending can be seen in the nation’s low graduation rates as well as in the $1.1 trillion in defined-benefit pension deficits and unfunded retired teacher healthcare costs, both of which will be costly to the nation’s society and economy for decades to come. And in an age of tight budgets, with the nation still mired in economic malaise, increasing taxes to fund schools is both economically unsustainable and fiscal folly.

It’s high time for education players in California and the rest of the nation to accept the reality that it’s not what is spent on education that matters, but how it is spent. This means ending practices that not only cost money, but exacerbate the education crisis. Degree- and seniority-based pay, for example, is no longer acceptable in an age in which teacher performance can be measured and rewarded. Same is true for defined-benefit pension schemes that do little to reward good and great teachers while they are still working. Systemic reform will ultimately do more for kids than pouring more dollars into failure.

The AFT's Latest Disclosure: $27 Million to Preserve Its Influence