RiShawn Biddle
6 Comments on Ending the Myopia of Reformers on School Choice: Why Parent Trigger Matters 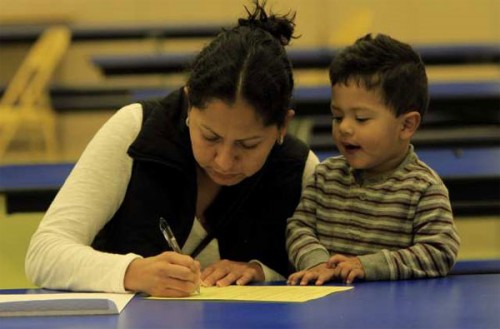 One of the oddest things among school reformers is the myopic (and often limited) views on school choice (and by extension, Parent Power) held by each of the factions in the movement. From centrist Democrats who think that choice should only be limited to the expansion of public charter schools (and their senseless opposition to school vouchers, which, provide money to parochial and private schools, which, like charters, are privately-operated), to the libertarian Cato Institute’s pursuit of ideological purity through its bashing of charters and vouchers in favor of the voucher-like tax credit plans (which explains the irrelevance of the think tank’s education team on education matters outside of higher ed), reformers sometimes seem more-focused on their own preferred version of choice instead of on the more-important goal of expanding opportunities for families to provide our children with high-quality teaching and comprehensive college-preparatory curricula.

This is especially true when Parent Trigger laws, which allow families to take control of failing schools, becomes part of the choice conversation. From the perspective of Beltway and operator-driven reformers (especially those who run public charter schools), Parent Trigger laws are not as sustainable as other forms of choice they prefer because families, especially the great unwashed in our urban communities, lack the savvy and teamwork skills (especially with those who may be on the losing side of school takeovers) only given to the institutionally-driven reform crowd. And yes, the thinking, based on a lack of reasoning about the ability of parents to actually make smart decisions when given tools to do so, is as absolutely condescending as it strikes you to be.

The latest example of this thinking comes from Neerav Kingsland, the operating chief of New Schools for New Orleans, who declares at Title-I Derland that reformers “shouldn’t support Parent Trigger laws at all”. From Kingsland’s perspective, Parent Trigger laws “will be better at destroying bad schools than creating excellent schools” and “end up decreasing student achievement” because families will be involved in school operations, which is something he thinks they aren’t equipped to handle, akin to store customers and hospital patients protesting in front of shopping outlets and taking over hospital management. What parents should be able to do is be able to escape failing schools and choose schools fit for their kids as families can do now in New Orleans, where choice began to flourish in the aftermath of Hurricane Katrina six years ago.

Your editor won’t bother pointing out that one example Kingsland used — retail stores — doesn’t apply because retailing is a private-sector activity in a flourishing marketplace, something that doesn’t typify American public education today; this would be ideal, but it is unlikely to happen for now. Given that Kingsland seems to be a nice enough guy (as well as one of the more innovative-thinking reformers out there), your editor will be gentler in his criticism.

In any case, it is nice of Kingsland to point to New Orleans, where charters have become the dominant providers of education to the Crescent City’s students. But as New Schools Venture Fund’s Benjamin Riley has pointed out, the reality is that just one out of every five children and their families — usually in the nation’s big cities — have access to such array of school options. Certainly the Obama administration’s Race to the Top effort has spurred states such as California and New York to abolish or modify restrictions on the expansion of charters. States are furthering their expansion by launching state agencies charged with authorizing those schools (as well as allowing universities, city goverments and other institutions to authorize them) has also helped expand the presence of charters. But there are still far too many states such as Virginia where districts are charged with deciding whether charters can open in the first place. Given that charters are competition with their schools, districts have little incentive to either approve charters, authorize high-quality operators, or, as in the case of the fracas between the Fulton County district in Georgia and the Fulton Science Academy (now a private school), keep them around if they show up the competition. While more than 13 schools have either launched or expanded school voucher and tax credit programs in the past two years, efforts by National Education Association and American Federation of Teachers affiliates to shut them down, either by voter referendums (as in Florida) or through lawsuits, are reminders of the challenges to expanding choice that remain.

But those oversights not the biggest problem with Kingsland’s anti-Parent Trigger argument. Like others (including my friend, Andy Rotherham, whose position on Parent Trigger laws was the subject of an earlier Dropout Nation critique), Kingsland articulates a vision of school reform that fails to realize that families are quite capable (and have the right to be) lead decision-makers in education for the children they love.

For one, his proclamations that families aren’t equipped to manage schools fails to consider the reality that some of the most-successful school reform efforts have been — and continue to be — done by folks who didn’t know much about education until stumbled into reform. This includes mothers and fathers spurred to take action and become what former National Urban League president Hugh Price calls impromptu leaders by concerns for the futures of their children. From Virginia Walden Ford’s work in spurring reform in Washington, D.C., to Shree Medlock of Black Alliance for Educational Options, to Gwen Samuel, whose work led to the passage of the nation’s second Parent Trigger laws, families and other grassroots players have done the work of jump-starting and sustaining reform that Beltway and operator-oriented reformers, often more-concerned about policy and management than with rallying critical support from people on the ground, almost never do.

Certainly school turnarounds aren’t ever easy, even if the school is removed from the control of failing districts (whose cultures of mediocrity, failure, and dysfunction are the immediate reasons why schools become dropout factories in the first place). Families who successfully use Parent Trigger laws to take over schools definitely won’t have it all that easy, and will have to pick up their copies of Anthony Bryk’s Organizing Schools for Improvement . But it isn’t impossible for a group of dedicated parents to turn around schools, either in an operational or (in most cases) governance role. Thanks in part to digital learning tools, families taking over a school can bring high quality instruction to classrooms. There are other resources, especially within communities, that can be brought to bear in revamping a school. And given how poorly experienced operators within traditional districts and even some charters are doing in operating and overhauling schools, statements that only experts should be entrusted with running schools (the crux of Kingsland’s argument) doesn’t hold water, especially with moms and dads who have seen principals and teachers screw up royally.

The other problem with Kingsland’s argument against Parent Trigger laws is that he embraces a rather limited vision of school choice as escape from failure. But school choice isn’t just about families moving their kids out of failure mills and dropout factories. It is also about the ability to choose the very structure of education for the kids they love, and the ability to push for reforms directly in their communities. And why not start with the school in their own backyard?

Let’s be clear: Even if choice fully flourishes, families are still going to want real choices in their neighborhoods. After all, the high cost of sending kids outside of communities, both in terms of transportation and time, remains a challenge even for the most well-off of families. As Dianne Piche of the Leadership Council for Civil and Human Rights noted last year in a Center for American Progress forum, single mothers, in particular, have to also think about childcare, especially since they must pick up their kids from school and daycare. The fact that these families have invested heavily in these schools (especially through their taxpayer dollars), along with their ties to the schools (which are often longstanding institutions in their communities, for better or worse) also makes their desire to overhaul them rather understandable. In short, it just makes sense for families to take charge of neighborhood schools from central bureaucracies and teachers’ union affiliates distant from their concerns for their children, or at the very least, use Parent Trigger laws to become lead decision-makers in the school with the district paying heed.

Then there is Kingsland’s supposition that families should only be concerned about shopping for schools. Such a view fails to consider that the possibility that this isn’t enough for many parents. There is a reason why the nation’s homeschooling movement serves nearly as many children as the nation’s charter schools (if not more), and why online learning has become popular for others: Because there are families who want to play more-prominent roles in shaping curricula, instruction, and school climates. Families likely to use Parent Trigger laws may not necessarily seek control and customize learning environments in the same way homeschooling families desire. But in the case of black, Latino, Asian, and especially American Indian and Native Hawaiian communities, they may want to transform cultures in existing schools in order to provide both high-quality learning and environments in which their cultures are respected. And Parent Trigger laws can help advance systemic reform by addressing an aspect of education that many reformers, especially those from white households that aren’t religious, don’t have to consider.

This isn’t to say all families will want to lead overhauls of existing schools or even go further and start their own. This is why we must also expand all other forms of choice and Parent Power, from open enrollment within districts to vouchers and voucher-like tax credit plans. At the same time, families should have the opportunity to take control of the very schools that, as Harlem Children Zone’s Geoffrey Canada has noted, are at the center of the communities and the lives of their children. What reformers should do is develop the tools that can allow families to make school overhauls successful; this includes building comprehensive school data systems that can be used in measuring success, and continuing to advance teacher quality reforms (including comprehensive teacher and principal evaluations based mostly on value-added analysis of student test score growth data, a subject of this week’s Dropout Nation Podcast) that can allow school operators of all types to select high-quality talents.

Kingsland’s myopic view isn’t exactly shocking or unusual. But reformers should know better. The fact that Kingsland and others fail to embrace an expansive vision of choice fitting of our children and families is one that must be overcome in order to transform American public education for the better.