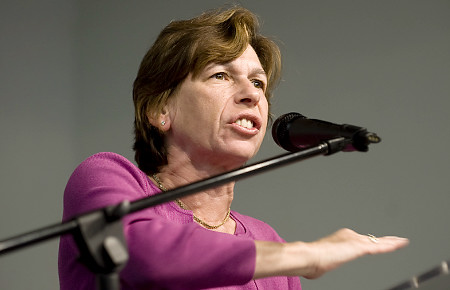 Summertime never turns out to be the right time for American Federation of Teachers President Rhonda (Randi) Weingarten. This time last year, Dropout Nation revealed the presentation by the union’s Connecticut affiliate at its national conference discussing how first attempted to “kill”, then watered down the Nutmeg State’s Parent Trigger law. The revelation, which once again showed the AFT’s true views on Parent Power, forced Weingarten to issue a series of non-apology apologies for the union’s hard-ball tactics and to meet with Connecticut Parents Union President Gwen Samuel as well as with current and former state legislators miffed by the news.

This, by the way, came amid series of incidents that put shambles to Weingarten’s strategy to triangulate the school reform movement — including the unsuccessful alliance struck by its flagship New York City affiliate and the Empire State branch of the National Association for the Advancement of Colored People to stop the expansion of charter schools in the Big Apple.

Now, Weingarten finds herself in another inglorious affair, just as she is reviving her triangulation strategy (including a masterful stage-managing of last month’s national convention in Detroit, and declaring that some of the more-hardline activists within the union need to embrace her tactics). This time, it comes courtesy of former CNN anchor Campbell Brown, whose Wall Street Journal op-ed cast light on the AFT’s penchant for perpetuating cultures of abuse through its defense of teacher dismissal processes that seem built for letting criminally and educationally abusive teachers (along with those engaged in sexual harassment and other inappropriate behavior that would lead to speedy firings in the private sector) keep their jobs.

After complaining on Twitter that Brown’s piece failed to show how the union championed a series of recommendations to the dismissal process crafted by famed lawyer Kenneth Feinberg (which, by the way, the union only adopted after two years of furor over the lengthy years-long arbitration proceedings described in coverage of New York City’s infamous rubber rooms by reporters such as Class Warfare writer Steve Brill), Weingarten then retweeted one AFT fellow-traveler’s carping that Brown “didn’t want to be balanced”. Why? Because Brown’s husband, Dan Senor, advises Republican Presidential nominee presumptive Mitt Romney and sits on the board of the New York branch of StudentsFirst, the outfit run by Weingarten arch-nemesis Michelle Rhee. [Other Weingarten fellow-travelers, notably Caroline Grannan, are trying to dish even more mud, this time at Rhee and her husband, Sacramento Mayor Kevin Johnson, as part of their effort to further obfuscate the matter at hand.] Weingarten then became reticent — simply reduced to declaring the union’s opposition to having criminally abusive teachers work in classrooms — after Brown continually asked the union boss how could one such instructor still retain his job after he asked a student to take off her clothes. Noted Brown: “for all the back and forth, no one can explain why nyc teacher who asked young girl for striptease was not fired.”

Certainly one can say that Brown should have mentioned her husband’s role with StudentsFirst. In fact, the disclosure should have been done. But in all honesty, none of that really mattered. After all, Brown wasn’t exactly acting in the role of a traditional objective news reporter (which given her conflict, meant she couldn’t even write about this issue), but as an editorialist who, by nature of the job, is going to have an opinion and perhaps some conflicts as well.

More importantly, for Weingarten, the exchange with Brown (especially the retweet of the fellow-traveler’s mudslinging) hasn’t cast either the AFT or herself in the best light.

Mentioning how someone’s relationship with their spouse or life partner may shape their views is not necessarily unfair so long as there is a paper trail suggesting that such influence has occurred, especially once a person steps into the public intellectual area. It is why Kevin Carey was on target for mentioning in his profile of once-respectable education historian Diane Ravitch how her relationship with a former New York City school leader (and her dealings with former schools chancellor Joel Klein) may be a driving force in Ravitch’s turn from avid-if-dilettantish reformer to thoughtless traditionalist. Yet in the case of Brown, Weingarten was rather condescending in essentially intimating through a retweet and other statements that Brown couldn’t come to her own judgment on these issues without her husband’s influence. Not exactly a way to bolster those faux progressive credentials Weingarten and the union have been trying to burnish as part of its co-opting of the Occupy Wall Street and MoveOn.org crowds.

Weingarten’s intimation that Brown can’t have an honest opposition to teacher dismissal processes (or have honest reasons for supporting school reform) is engaging in the very uncivil discourse she proclaims that she wants. (Given Weingarten’s past record, and that of underlings such as now-Shanker Institute honcho Leo Casey, this isn’t exactly surprising.) No one should expect Weingarten to hold the proverbial crowd on her side at bay. But retweeting the very kind of uncivil discourse she proclaims to oppose shows that she only backs calm, rational discussions when it suits her.

Meanwhile Weingarten’s exchange with Brown also serves as a reminder that the union leader tends to be rhetorically (and intellectually) disingenuous when confronted with the consequences of the AFT’s defense of failed policies and practices. Sure, the union deserves some credit for talking the talk on trying to shorten the length of teacher firings — including demanding a more-concrete set of charges against criminally abusive instructors, and limiting dismissal proceedings to 100 days — and given that Weingarten is the reason why it made such a move in the first place, she deserves that credit too. But the Feinberg recommendations are still rather weak sauce, especially in light of the fact that it still keeps in place state laws and processes that make it almost impossible for school and district leaders to fire teachers who don’t belong in classrooms. This, in turn, explains why so many schools and districts become mired in cultures of low expectations in which moral and educational misbehavior is rampant and tolerated until the spotlight is shown on them.

Which hits on a bigger issue for the AFT. As my fellow New York native Weingarten should know by now, talk is as cheap as a dollar cab in Queens, without the latter’s penchant for action in the form of a convenient ride. When it comes to embracing reform of teacher dismissal processes — especially for instructors alleged and convicted of criminal abuse of children — the activities of the union’s affiliates speak louder — and badly — than Weingarten’s rhetoric.

This was especially clear this past June, after the AFT’s California and Los Angeles affiliates helped successfully kill a state legislative proposal, Senate Bill 1530, which would have made it easier for districts to toss out instructors who were accused of criminal abuse of children by putting those cases in the hands of an administrative judge instead of the three-person panel of the state’s Professional Competence commission that is largely slated in favor of the AFT and affiliates of the National Education Association. The AFT affiliates had an opportunity to take a strong stand against criminal abuse of children which was highlighted by the scandal enveloping the Los Angeles Unified School District over the long career of former Miramonte Elementary School teacher Mark Berndt, who now faces 23 charges of what the law politely calls lewd acts upon a child. But the union was more concerned that districts would be able to suspend teachers accused of alleged sexual and substance abuse crimes without pay and with so-called “due process” than with actually doing the right thing by both children and the honorable professionals in classrooms whose interests they purport to represent. And Weingarten, who could have called out her colleagues for their shameful behavior, said absolutely, positively nothing.

For all of Weingarten’s proclamations about elevating the teaching profession, improving American public education, and fostering cultures of genius in which all kids succeed, the AFT seems bent on none of that. And the Twitter fight with Campbell Brown brings this reality home once again.

Voices of the Dropout Nation: Sandy Kress on the Obama-Duncan No Child Waiver Gambit