RiShawn Biddle
1 Comment on Randi Weingarten Gets It Wrong Again, or Why We Need Teacher Quality Reforms, Not Bar Exams 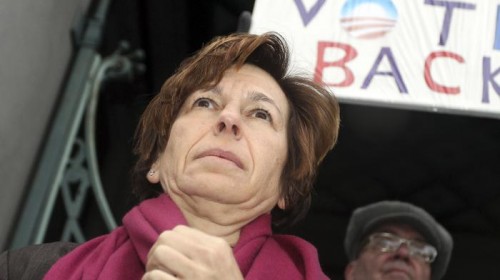 No matter what you think of American Federation of Teachers President Randi Weingarten, one has to admit that she is certainly clever. After all, until last year, when a series of missteps by the union’s New York City local and its compatriots in other cities (along with Dropout Nation revelations of the union’s real views on Parent Trigger laws and Parent Power in general), Weingarten had managed to portray the nation’s second-largest teachers’ union as being more willing to embrace reform than the rival National Education Association. Even with these failures, Weingarten still remains a better-known figure among education traditionalists with real policymaking clout (and, inexplicably, more-respected despite her disingenuousness) than her slightly more-intellectually honest NEA counterpart, Dennis Van Roekel.

So it wasn’t surprising that media and policy types, including a few in education policy circles, lapped up Weingarten’s suggestion last week at the Aspen Festival of Ideas that one way to improve the image of teachers (and address the low quality of the nation’s teaching corps) is to administer an exam of knowledge (and in theory, competence) similar to that administered to the nation’s lawyers. It certainly convinced those not on the education beat such as Steve Clemons, the politics and foreign affairs guy for the Atlantic Monthly, who suggested that “Weingarten may be on to something that helps change the impression that many have of the quality of today’s teachers and teacher unions. For those who don’t know how teachers actually get into the classroom, it sounds like such a great idea because such an exam would, in theory, improve the quality of teaching by restricting who gets into classrooms.

But like so many of Weingarten’s ideas, it doesn’t pass the smell test, and not just because this is an idea that has been bandied about for decades. For one, teachers themselves aren’t held in any low esteem. If one actually looks at Phi Delta Kappa’s annual survey, most folks actually think highly of teachers. The profession is certainly plagued by both the perception and reality of  its lack of sophistication (which is one reason why the profession struggles to attract talented collegians), the views among poor and minority families that teachers and other adults in education think little of them (which ends up being more the case than most education traditionalists want to admit), and the growing awareness of how traditional teacher compensation policies (including near-lifetime employment granted through tenure) keep laggard instructors in classroom. But teachers are still viewed as folks who are engaged in what most think is a noble effort to help all kids learn, a perception that has been elevated thanks to the work of the alternative teacher training outfits such as Teach for America and Urban Teacher Residency United, for which traditionalists like Weingarten hold disdain.

It’s not the perception of teachers that has taken a hit. It’s that of the AFT and the NEA, which have been rightly derided for doing little more than defending a failed vision of American public education. Like so many traditionalists, Weingarten conflates public regard for teachers’ unions with that of the teachers who are often forced into membership (and to pay dues) by state laws the two unions fight bitterly to keep in place. Weingarten should stop engaging in this intellectually dishonest posturing and transform the AFT into a professional association worthy of its members.

Secondly, Weingarten fails to admit that there are competency and licensing exams already in place, including the PRAXIS battery of exams administered by the Educational Testing Service, and exams offered by the Teacher Performance Assessment Consortium that includes the American Association of Colleges of Teacher Education. Teachers certainly take plenty of tests. An instructor in Indiana, for example, may have to take four or more exams, depending on the subjects they are teaching and whether they are teaching in pre-kindergarten, elementary or secondary school settings; a teacher will take even more tests just to gain National Board recognition (and additional dollars in salary).

Why would Weingarten fail to mention those tests? Because teacher certification in general — and teacher certification test, in particular — have been a bust. For one, the tests have been far too easy for aspiring teachers to pass, essentially allowing all but the least subject-matter competent to walk into classrooms. This is because state teacher licensing agencies separate from education departments that set teacher training standards tend to be wildly inconsistent in their cut-score setting. Ninety-six percent of aspiring teachers passed their competency exams, according to the U.S. Department of Education. Given that the tests also don’t demonstrate what teachers must actually do in the classroom (and, save for National Board certification, don’t lead to any increases in pay), one can understand why teachers are even less in love with Weingarten’s proposal than yours truly.

More importantly, even if the tests had any rigor, decades of research has concluded that there is weak or no correlation between teacher testing (and the credentials received upon passing them) and the ability of those teachers to improve student achievement; as University of Washington researcher Dan Goldhaber noted in his study of North Carolina’s teacher testing efforts, the tests don’t take away ” the need for districts to be selective when hiring teachers” and for districts and states to  “consider policies designed to shape their labor forces once they have had the chance to observe the effects of teachers in the classroom.”

All of this gets to the heart of the biggest problem with Weingarten’s suggestion: The reality that we must overhaul how we recruit, train, manage, and compensate teachers in order to improve the quality of instruction for all children.

The nation’s university schools of education do a terrible job of recruiting aspiring teachers for those things that matter most in a high-quality teacher: Strong subject-matter competency; empathy for all children (especially those from backgrounds different from themselves); and the entrepreneurial self-starter ability to manage classrooms and school cultures on their own. As University of Missouri researcher Cory Koedel noted in a study released last year, grade point averages for ed school students are greatly inflated compared to the g.p.a.’s of peers in tougher subjects such as math, science, and even the humanities; given that half of teachers never make it into classrooms, it is clear that ed schools are likely venues for collegians seeking an easy “A” instead of a training ground for teachers to do well in classrooms. The fact that the ed schools do a terrible job of training aspiring teachers once they are admitted, with professors focused more on theories of instruction instead of on how to actually teach kids in real classrooms, is also a problem. As the National Council on Teacher Quality has shown ad nauseam, ed schools often do a shoddy job of preparing teachers in the science of reading and mathematics; the schools also do a subpar job in providing those aspiring instructors with the kind of clinical in the field experiences that can make wring out a high-quality teacher from one who should find another career path.

Once low-quality teachers get out of ed schools and into classrooms, there is little way to get them out. Thanks to rules in all but a few states that allow teachers to gain near-lifetime employment through tenure, and teacher evaluation systems in 27 states that don’t require the use of objective student test performance data in measuring teacher quality, a laggard teacher can stay on the job for four decades or longer (and ruin the futures of at least 604 children unfortunate to be assigned to them). The traditional degree- and seniority-based pay scales, based on notions of what connotes quality that have long ago been disproved by data, keeps laggards attracted to guaranteed salaries and benefits regardless of performance on the job, while driving out high-quality colleagues who don’t get the recognition they deserve (and must put up with cultures of mediocrity and failure fostered by the presence of such colleagues). All of this is aided and abetted by abysmal school leaders, who aren’t equipped to hand up coats at Ruth’s Chris, much less manage and evaluate teachers.

This super-cluster of failure is incubated by the very policies and practices Weingarten and the AFT (along with Van Roekel and the NEA) continue to defend, and not just through opposition to the use of student test score data in evaluating teachers. The AFT alone gave $33,319 in its 2010-2011 school year to the National Council on Accreditation of Teacher Education, the group charged with validating the quality of ed school offerings. The NEA has long been allied with NCATE, subsidizing it to the tune of $2.3 million in largesse over the past seven years alone. And although the AFT and NEA have convened panels on revamping teacher training (and, in the case of Weingarten, even made the smart suggestion of embracing the apprenticeship model used in high-skilled blue collar trades), the two unions have done little to actually effect any change. As seen with the NEA’s own year-long effort to determine if Teach For America was some sort of union-busting front, both unions are unwilling to embrace new ways of training teachers.

Weingarten should stop with the whole bar exams for teachers chatter and focus more on revamping how we recruit, train, and evaluate teachers.

This starts by forcing ed schools and other teacher preparation programs to recruit talented young men and women based on their subject-matter competence, empathy for all children, and entrepreneurial ability. Teaching guru Martin Haberman’s method of teacher selection, in which aspiring teachers are observed working with children from backgrounds different from their own, would work (alongside using student surveys that can show how kids actually react to those candidates); looking at those who have demonstrated leadership and entrepreneurial ability in other settings, a key selection criterion for admission into Teach For America, should be embraced by every ed school program.

It also means forcing ed schools to overhaul their own curricula to focus solely on proven methods to teach in various subjects instead of on pedagogy; they should also ditch ed school professors who have no classroom training experience and hire good-to-great teachers who actually have done the work. Supporting the development of new alternative teacher training programs and new ed schools operated by districts and charter school operators such as the Relay Graduate School, would also make sense.

Finally, it’s time to fully support the use of student performance and test score growth data in evaluating teacher performance. This is one that will be harder for Weingarten to do given the opposition among her colleagues in AFT leadership. But this is what Weingarten must do if she really wants to be more than a clever strategist for preserving the AFT’s waning influence. Abandoning the defense of tenure, which does little for either good-to-great teachers within her rank-and-file, and more importantly, for children in classrooms, must also be on the union’s agenda.

If Weingarten is truly serious about improving the quality of teaching in the nation’s schools — and providing all kids with high-quality teachers — she can start by abandoning this teacher bar exam talk. And embrace systemic reform instead.