The Failure of School Leadership: Eugene White, Indianapolis, and the Need to End the District Model

RiShawn Biddle
5 Comments on The Failure of School Leadership: Eugene White, Indianapolis, and the Need to End the District Model 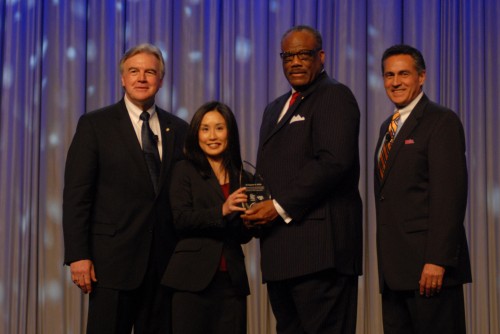 If success as a school leader is merely judged on length of tenure alone, then Indianapolis Public Schools Superintendent Eugene White has clearly done well. Unlike peers such as former Philadelphia schools chief Arlene Ackerman, White has held on to the job of heading one of the nation’s most-populous districts in the American Midwest for seven years, or double the usual tenure.

But holding onto a job isn’t good enough, especially when one is overseeing a district almost as infamous as Detroit for systemic academic failure. By all other counts, White has been an abject failure. Which makes recent news that he’s being considered for the top school leadership job in Greenville, S.C., even more puzzling. How school board members in that city have ignored the facts about White’s tenure — and the fact that counterparts in the Circle City have allowed him to stay in his current job for so long — offers examples of why overhauling school governance is critical to helping all children (especially young men of poor and minority backgrounds) get high quality education.

White’s job search comes just as his future in Indianapolis is in doubt. School reformers in the city are rallying around the efforts of the Mind Trust to place the district under mayoral control. Current Mayor Greg Ballard has been mum about the proposal, and state legislators across the way at the Indiana Statehouse haven’t moved on a plan. But all the talk about mayoral control (along with Ballard’s appointment of a former Teach For America executive as his education czar) has made clear that such action is inevitable.

At the same time, White has attracted plenty of the wrong kind of attention. In one of his more-ludicrous statements, he proclaimed last October that IPS was failing because unlike Indianapolis’ charter schools, the 33,079-student district had to take kids who were “blind, crippled, crazy”. (White later apologized for the statement; Dropout Nation would chastise White for this and other failures in its podcast on school leadership.) Months earlier, White had the dubious distinction of being the first superintendent in the Hoosier State to watch the state seize control of four of the district’s schools and hand them over to private and nonprofit charter school operators. This included Emmerich Manual High School, one of the most-persistent dropout factories in the Midwest with graduation rates likely hovering below 60 percent long before your editor brought attention to its woeful state in a 2005 editorial series on the nation’s dropout crisis.

Given these circumstances, White shouldn’t even be under consideration for a coat check job at Ruth’s Chris, much less competing for the chance to be entrusted with management of the larger Greenville district (and the futures of the 69,802 children in its care). But then, White shouldn’t even be in his current job. Ever since taking over IPS during the 2005-2006 school year from the less-than-remarkable Duncan “Pat” Pritchett, White has presided over a series of district reorganizations and administrative reshufflings that have resulted in little improvement in student achievement. Although the district’s five-year Promoting Power rate (based on eighth-grade enrollment) improved from 32 percent to 47 percent between 2005-2006 and 2009-2010, IPS’s five-year graduation rate declined from 41 percent to 36 percent over that time, according to a Dropout Nation analysis of federal and state data. In fact, IPS graduated 205 fewer graduates in 2009-2010 than it did five years earlier; that’s greater than the 90-student decline in eighth-grade enrollment that happened over that same period.

Meanwhile White hasn’t exactly improved IPS’ performance by other measures. Between 2006-2007 and 2010-2011, the percentage of all students passing the Hoosier State’s battery of standardized tests barely increased, from 40 percent to 45 percent. When one looks closer, the growth in achievement is even less impressive. The percentage of fourth-graders passing the state’s reading test increased by just two points (from 61 percent to 63 percent over that period.

Certainly this doesn’t fully account for the change in the period of testing from fall (when students are being tested after possibly having forgotten some of what they have learned) to spring (when kids have been taught all their lessons) in 2008-2009. But even the numbers from 2008-2009 to 2010-2011 aren’t too impressive. 63 percent of IPS fourth-graders passed the reading portion of the state test in 2010-2011, a seven point increase over 2008-2009. But a longitudinal look at performance shows that the district hasn’t done a great job of improving student achievement over time. Just 56 percent of IPS sixth-graders passed the reading portion of ISTEP in 2010-2011, a two point decline over their likely performance as fourth-graders two years earlier.

Such woeful numbers are difficult to dismiss in evaluating White’s tenure. It’s even harder to ignore his inability (or unwillingness) to change the district’s culture of incompetent leadership — or cut loose laggard principals and central office apparatchiks who have proven to be as much a reason for the IPS’ failures as the low quality of classroom teaching.

For years, White inexplicably allowed Jacqueline Greenwood to hold on to her job as principal of Arlington High School despite graduation rates that hovered around the 60-percent range; he eventually kicked her upstairs to a cushy central bureaucrat job overseeing IPS’ high schools. White also made sure to find cushy jobs for own kin regardless of their qualifications, fostering a culture of nepotism that reeks to high heaven. Meanwhile White did his best to ensure that those principals who actually pushed to overhaul failure mills never had a chance. Onetime John Marshall Middle School Principal Jeffery White (now a Dropout Nation contributor) ran afoul of White and his mandarins during his own turnaround effort of the failure mill.

Under most circumstances in the corporate, nonprofit, and even world of government, White wouldn’t have kept his job for so long. But he has been aided and abetted by a school board that has been equally as deficient in their leadership. In October, in spite of public pressure, the board majority refused to punish White for his “blind, crippled, crazy” comments, instead accepting his non-apology apology. Not that they are exactly in position to criticize White for anything. Both current board president Mary Busch and her predecessors, Michael D. Brown and Marianna R. Zaphiriou, have been on the board for more than two decades, overseeing the district’s slide into the academic and fiscal abyss.

Indianapolis has been a failing district for decades — dysfunction is in its cultural DNA — and has been willing to indulge school chieftains unworthy of their titles. Greenville has almost no such excuse. The district’s school board includes at least one prominent national player on the education scene, and also includes a few otherwise savvy local businesspeople and civic leaders. There’s no reason why White should even be under consideration.

Bud sadly, this isn’t surprising. School boards are notorious for either being servile to National Education Association and American Federation of Teachers affiliates, or being under the thrall of charismatic school leaders who know how to keep its members fat and happy. It isn’t as if the quality of board members is up to snuff compared to the corporate or nonprofit worlds in the first place. Given that NEA and AFT affiliates recruit candidates from the teaching ranks and administrative ranks, it’s hardly shocking that the board members have little governance or management savvy.

The lack of strong leadership, in turn, is aided and abetted by a traditional district structure, borne out of the Progressive Era, that is geared towards perpetuating the fiction that education is an apolitical activity. As a result, boards and the districts they oversee end up being unaccountable to both the families stuck with sending their kids to warehouses of mediocrity and failure, or to taxpayers in general. And as seen in Indianapolis, the worst consequences of such lack of accountability are borne by young men and women whose futures are proverbially chewed up and spit out.

For Indianapolis, mayoral control would be at least a temporary solution worth pursuing. Same may end up being true for Greenville (in this case, being run by the county). But in the long run, the solutions to ridding districts of faulty leadership may start with getting rid of the traditional district model itself. If it means fewer Eugene Whites presiding over educational failure, it will be progress.