Why Arne Duncan Must Improve the Quality of Civil Rights Data 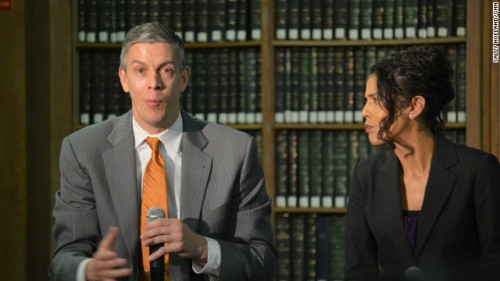 Last week’s announcement by U.S. Secretary of Education Arne Duncan and his civil rights czar, Russlynn Ali, of school discipline and college-readiness data collected by the Department of Education certainly deserved notice — and not just because of the shocking-but-unsurprisingly high levels of suspensions. For once, the department finally provided to the public a more-comprehensive collection of data, providing information on the use of restraints by school districts, the number of special ed students served through Section 504 plans, and even explaining the number of students taking Algebra 1. More importantly, it is provided in a format that is easy for families and the average person to use. Plenty of state education departments can learn lessons from the agency and follow accordingly.

At the same time, Duncan and Ali should pay close attention to some of the criticisms that are starting to emerge over the quality of the data itself. While some of the points miss the mark, it can also be said that there is still a need for more data that shows the degree to which students throughout this nation are either being well-served or subjected to educational malpractice.

The most-fervent criticism largely deals with the school discipline data, which has shown that black students account for 46 percent of students suspended more than once even though they account for 18 percent of enrollment. Duncan’s proclamation that the data was another disturbing sign of “fundamental unfairness” led commentators such as Jason Riley of the Wall Street Journal to accuse Duncan and the Obama administration of having “sympathies… with the knuckleheads who are disrupting class, not with the kids who are trying to get an education”. From where Riley and others sit, Duncan merely evidenced left-leaning tendency to see racism in the school discipline efforts of schools when the real issue is maintaining safe, orderly schools.

Arguments by Riley and others (along with their overall narrative) would have merit if not for a few inconvenient facts. For one, analysis of state-level discipline data (including information I gathered for the reports I wrote in 2005, 2006, and 2007 for the Indianapolis Star) indicates that more often than not, suspensions are more likely to be meted out for reasons other than violence, drugs, or weapons possession; most suspensions occur in categories such as disruptive behavior and attendance, while students are also expelled for chronic truancys. As Indiana University researcher Russ Skiba, the leading researcher on school discipline, has pointed out, schools often apply suspensions and expulsions far too inconsistently to be useful in improving school cultures. The fact that zero tolerance laws have essentially criminalized student behaviors that would have been dealt with in far more thoughtful ways is also part of the problem.

Riley and others also ignore another culprit: Low-quality teachers and lackluster school leaders — or, “the other knuckleheads, as Fordham Institute scholar Peter Meyer calls them — who perpetuate cultures of low expectations by failing in reading instruction and failing to properly manage classrooms. In fact, as Stanford University Researchers Deborah Stipek and Sarah Miles determined in a 2006 study, low literacy levels in first grade are strong predictors of disciplinary problems by third; the kids, struggling to learn, but unable to (and fearful) of admitting their issues, simply act out instead. As with chronic truancy, high levels of suspensions are indicators of mediocre, dysfunctional, and failing school cultures. If anything, there is likely a stronger correlation between low academic achievement and overuse of school discipline than between high levels of suspensions and safe schools. As Dropout Nation Contributing Editor Steve Peha has noted, there are far more effective ways to deal with student misbehavior that ultimately keep kids safe and on the path to graduation.

Meanwhile the Los Angeles Times got to the true heart of the matter when it pointed out in its editorial that Duncan ” missed an opportunity” to gather information on how discipline is actually being applied by schools. From where it sits, there is certainly plenty of evidence to show that minority students are more-likely to be targeted for overuse of suspensions and expulsions. At the same time, Duncan and Ali offered little in the way of real evidence one way or another. More importantly, given that rates of suspensions can be as high in mostly-black schools run by black principals (and overseen by superintendents), it’s hard to argue whether the problem is one of racial bigotry (as implied by Duncan in his announcement), a matter of class bias ( just as likely), or haphazard school and district policies. Either way, Duncan and Ali haven’t made nearly as compelling as a case as they could have made for making suspensions and expulsions as rare as possible.

Education Department officials should collect data on categories of suspensions,  including disruptive behavior and insubordination. Many states already collect this data, so it should be easy for the feds to cull as part of the civil rights data collection. It should also team up with researchers to follow up on the path-breaking research of Skiba and others to conduct a longitudinal study of what happens to students who have been suspended.

Duncan and Ali should also do more on the data front in other areas. As reported yesterday in Dropout Nation, the civil rights collection’s data on whether districts are providing comprehensive college-preparatory education to all of its students is flawed because it focuses on proportionality of course participation compared to overall district enrollment; this doesn’t fully reveal the extent of how few kids — especially those from poor and minority backgrounds — are not getting the preparation they need to do well in traditional colleges, technical schools, and apprenticeships (and ultimately, in the adult world). While it is nice to have data on teacher absenteeism (and the information illuminates the extent of the problem), the lack of information on chronic absenteeism — a key indicator of whether a student is on the path to dropping out — means that we don’t know how poorly schools are doing in providing high-quality instruction and curricula to the students in their care. Reporting this data (along with setting a common chronic truancy rate, for which this publication has long argued) would also be a good step.

Requiring states and districts to provide information on the quality and extent of school choice options — including whether the districts have open enrollment policies and the number of seats actually available to families who are not teachers or school employees — would go a long way. And requiring districts and states to report how many parents are arrested or charged each year with supposedly “stealing education” or violating residency laws would shed light on the pernicious effects of Zip Code Education policies. Certainly some of this will involve pressing skeptical House Republicans to move forward on requiring states to report more data. But Duncan can also leverage his competitive grant programs — including Race to the Top — for this purpose by requiring additional data collection to be a condition of gaining those funds.

Duncan and Ali deserve a lot of credit for improving the quality of data on what’s happening to our kids each and every day in schools. And now, we can go even further in shedding the light needed for the systemic transformation of public education.