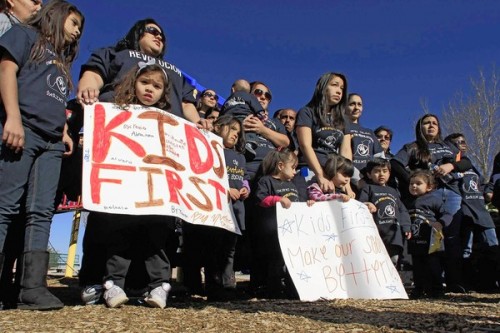 To understand why Parent Trigger laws are critical parts of expanding school choice and Parent Power, consider P.S. 45 in my home neighborhood of South Ozone Park in New York City and its strong ties to the families who send their kids there. Better-known these days as the school that hip-hop star Nicki Minaj attended long before she found inexplicable fame (and the onetime grounds of a certain editor and education columnist), P.S. 45 isn’t exactly one of the Big Apple’s finest schools. While it garnered a ‘B’ overall among its peer group of elementary schools in the Big Apple, just 64 percent of its students scored at level three or four on the math portion of New York State’s standardized tests while a mere 52 percent scored at the top levels on the reading portion. It has also not done well in closing achievement gaps, especially among young black and Latino men.

One can imagine the parents of kids attending P.S. 45 would send their kids to other traditional, charter, or even private schools if choice was available. This could include the better-performing P.S. 97 in the Woodhaven section of Queens, or St. Clare’s School in the Rosedale section of the city. But for those families, especially single mothers and blue-collar households, choice sounds great in the abstract until one thinks about the high cost of transporting their kids out of their own neighborhoods just so they can get a high quality education. This is especially for a community (part of the zip code of 11436) in which 69 percent of residents own their homes (higher than the national average of 66 percent) and (along with apartment tenants, through their rents) pay hefty Big Apple property taxes to finance district operations.

Then there are the ties that bind P.S. 45 to the neighborhoods surrounding it. The school has been around since the first days of the 20th century, just when the South Ozone Park neighborhood was transitioning from farming into one of the earliest New York City suburbs; there is a plaque dedicated to World War I veterans who attended the school right at its front door. Its doors have been open for the community’s myriad transitions, from farming to suburbs for up-and-coming German and Jewish households, to comfortable bedroom neighborhoods for blue-collar black families, to the current mecca for Caribbean and Latino families. It’s officially named the Clarence E. Witherspoon School after a local community leader and contemporary of my dearly departed grandmother. In short, P.S. 45 is as much a part of the lives of the people who live in it as nearby Baisley Pond Park and John F. Kennedy International Airport.

As one of the two generations of my family who attended P.S. 45, I can understand why those who live in the neighborhood don’t simply want to walk away from it. But they aren’t going to just want to keep the status quo in place either. More than likely, these residents — many of whom are first-generation middle class residents, entrepreneurs, and blue-collar workers — would use a Patent Trigger law to remove control of P.S. 45 from the New York City Department of Education, and lead an overhaul so that all families and their kids have a wider array of choices. It is why Parent Power groups in four states have successfuly passed Parent Trigger laws — and why Parent Power groups in Florida will fight to revive a Patent Trifger Bill defeated this week thanks to cowardly Republicans in the Sunshine State’s upper house.

This reality that Parent Trigger laws are as much a critical element of choice as vouchers and charters is something that my otherwise more thoughtful friend, Andy Rotherham, fails to consider in his latest Time column. Proclaiming that Parent Trigger laws are akin to “handling real firearms”, the proprietor of Eduwonk argues that they aren’t as sustainable as other forms of choice preferred by the Beltway crowd. Why? Because, in his mind, it could fuel too much “chaos” and “disruption” when a majority of families manage to take over a school, displeasing those families in the minority who would prefer to keep the school in traditional district hands. More importantly, Rotherham doesn’t see how families can succeed in overhauling schools when traditional districts have only a 1 percent rate of success (and charter school operators would rather control their own schools).

Yet Rotherham fails to remember that turnarounds of failing schools rarely succeed because they are handled by equally failing districts. The cultures that breed failure in the central bureaucracy tend to extend into schools, especially since collective bargaining agreements and state laws essentially render principals mere figureheads stuck with useless roles as “instructional leaders”. The fact that the principals (many of them former teachers) may not have the leadership skills to do the job and have become part of the dysfunctional culture within districts also plays a part.

This isn’t exactly true with a parent-operated school turnaround because they would be in charge of managing the school (if they used the Parent Trigger law to take full control from the district). Certainly families will need to pick up their copies of Anthony Bryk’s Organizing Schools for Improvement and learn from the experiences of Green Dot Public Schools in its conversion and turnaround of Locke High School; they’ll even have to become savvy in management strategy. But it isn’t exactly impossible for a group of dedicated parents to turn around schools. Thanks in part to digital learning tools, families taking over a school can bring high quality instruction to classrooms. And there are other resources, especially within communities, that can be brought to bear in revamping a school.

More importantly, Rotherham embraces a far more limited idea of school choice, mostly that it is one of escape from failure. But school choice isn’t just about families moving their kids out of failure mills and dropout factories. It is also about the ability to choose the very structure of education for the kids they love, and the ability to push for reforms directly in their communities. And why not start with the school in their own backyard.

This isn’t simply about holding on to romantic notions about the buildings. Even if choice fully flourishes, families are still going to want real choices in their neighborhoods. After all, there is the high cost — both in time and transportation costs — of sending kids outside of neighborhoods. As Dianne Piche of the Leadership Council for Civil and Human Rights noted last year in a Center for American Progress forum, single mothers, in particular, have to also think about childcare, especially since they must pick up their kids from school and daycare. It just makes sense for families to take charge of neighborhood schools from central bureaucracies and teachers’ union affiliates distant from their concerns for their children, or at the very least, use Parent Trigger laws to become lead decision-makers in the school with the district paying heed.

Meanwhile, in declaring that “Schools should teach about the French Revolution, not have their parents act it out”, Rotherham reinforces a conceit found far too often found among Beltway reformers (and, as evidenced from Teach For America President Wendy Kopp’s thoughtless piece on releasing teacher performance data, even among some operator-oriented reformers): That families — especially those from poor and minority backgrounds — just aren’t equipped to make smart decisions when it comes to school operations. Generally Rotherham is more thoughtful (and less glib) about the role of families in education than many of his counterparts. But in evaluating the efficacy of Parent Trigger efforts, Rotherham fails to realize that parents can actually make smart decisions, especially when they have high-quality information and some guidance available to them. This isn’t to say that they will always make the best choices; they will make mistakes along the way. But to argue that families can’t run schools (and cannot figure out ways to reach common ground with those families who may not support the effort) ignores the reality that this is done every day by families in every aspect of life.

At the same time, Rotherham fails to remember that for all the preening of Beltway reformers, the most-successful school reform efforts have been — and continue to be — done by folks who didn’t know much about education until stumbled into reform. This includes mothers and fathers spurred to take action and become what former National Urban League president Hugh Price calls impromptu leaders by concerns for the futures of their children.

It was a mother, Virginia Walden Ford, whose activism forced the reforms that are slowly improving D.C.’s traditional public school system and bringing high-quality options into the poorest neighborhoods. It was Gwen Samuel, a mother from Connecticut bereft of shiny public policy credentials, who led the passage of the nation’s second Parent Trigger law and has spurred the current efforts at reforming teacher quality and expanding school choice happening in the Nutmeg State. Then there is the work of Shree Medlock, the National Advocacy Director for Black Alliance for Educational Options, who began her work as mother concerned about her own child’s progress in school. And then there is the work of Parent Power groups in Buffalo, N.Y., and in other parts of the nation, who are challenging district bureaucracies and affiliates of the National Education Association and American Federation of Teachers to transform education for their kids.

Certainly not all families are going to want to attempt to overhaul schools (much less start their own); this is why we must also expand all other forms of choice and Parent Power, from open enrollment within districts to vouchers and voucher-like tax credit plans. At the same time, families who want to overhaul the existing schools within blocks of their homes should be able to do so. And more than likely, they can do a better job for their children than dysfunctional district bureaucracies that have failed generations of children for far too long.