What Parents Deserve to Know: Or Why Publishing Value-Added Teacher Data Makes Sense 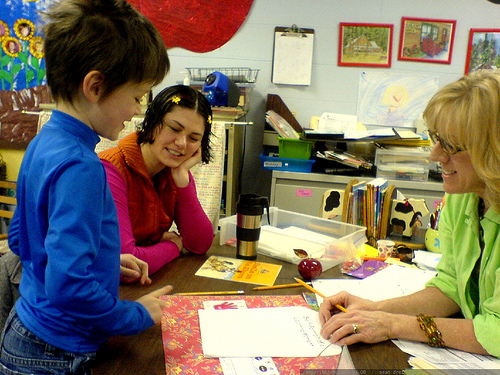 Yesterday’s one-sentence criticism of my friend Andy Rotherham’s argument against publishing Value-Added data on individual teacher performance (also a one-liner in his otherwise thoughtful Time column arguing for parents to push for teacher choice), led the Eduwonk publisher to offer a short-yet-energetic response. From where Rotherham sits, releasing such data to the public merely provides incomplete data without any context. In his opinion,Value-Added data is a poor substitute for “an overall evaluation that includes other elements and professional judgment.” And he criticizes other supporters of publishing Value-Added data for saying “of course a teacher’s evaluation shouldn’t be based just on test scores” while supporting the release of data that “by default becomes a summative judgement”.

Your editor will not address Rotherham’s last point. As you already know, I’m skeptical of the multiple measures approach to teacher performance management — at least in the form of combining Value-Added data with student surveys and abysmally inaccurate classroom observations — because it renders evaluations less-useful to families, school leaders, and teachers. Nor am I going to spend time on Rotherham’s contention that releasing Value-Added data is akin to revealing “error rates of journalists… or doctors without regard to what they do” because the examples he cites doesn’t really apply. All journalists, for example, work for private-sector organizations from whose services customers can freely choose; besides, the stakes for consumers of media is far lower than for families choosing schools (and by proxy, the teachers who work within them).

But Rotherham’s main contention — that Value-Added data is incomplete and doesn’t provide enough data for families to fully judging teacher performance — deserves consideration. Why? Because in making his argument, Rotherham mishmashes the data needs of parents — who have to be concerned with finding high-quality educational options for their children — with those of those who operate schools and districts (who, as education service providers, must figure out how to deliver high-quality instruction and curricula).

Certainly Value-Added data is incomplete. It isn’t even perfect. But all information by the very nature of this thing called life is incomplete and imperfect. Arguing that as an underlying reason for opposing its publication doesn’t stand up to any sort of intellectual scrutiny. More importantly, what matters isn’t whether data is absolutely complete (an impossibility in the real world), but whether it provides you and other particular parties with the most-objective and important information needed to make smart decisions. As Robert Capps of Wired — he of the concept of good enough technology — would argue, that’s what counts most in every aspect of life.

School leaders, for example, need a wide array of data for their hiring, firing, and compensation decisions. Why? Because, while teacher quality is the most-important consideration, it isn’t the only one. After all, they may also want to reward teachers for developing innovative programs that address particular student learning issues, encourage more specialization among staff, or even make sure that teachers respect the rightful roles of families as lead decision-makers in education. So Value-Added data isn’t likely to be enough to inform those decisions.

Families, on the other hand, have different considerations. While they should be the lead decision-makers in education, they may not necessarily be involved in the operations of schools. They are more likely to look at education from a consumer orientation than from an operator position. Which means they will care about two things. The first?  The ability of instructors to improve student achievement over time. The second? Whether teachers care for — and empathize with — every child, regardless of who they are or where they live. So the data points they will need will be different.

For their first concern, Value-Added data meets the standard. After three decades, Value-Added has proven to be the most-objective tool in evaluating teacher performance in improving student achievement over time, allowing for families (and for everyone else) to know which teachers are doing an average job, which teachers are lagging and which teachers are doing great work. As the recent study from Harvard researchers Raj Chetty and John Friedman, along with Columbia’s Jonah Rockoff has also shown, it can also show how the performance of individual and even groups of teachers can impact the lifelong eanings of children after they leave school.

For families, Value-Added is particularly important for them in making school decisions. After all, as Rotherham rightly pointed out yesterday, the quality of a child’s education can vary from classroom to classroom. Even in the best-performing schools, traditional, charter or private, there are high-quality teachers working across the way from those who need help improving their instruction, and those who don’t need to be in classrooms at all. Even more importantly, at the elementary level, teacher quality can vary among teachers from one subject to another. In some cases, a teacher who is really strong in reading instruction may be a terrible math tutor, while her colleague down the hall is top-notch in that subject and so-so in reading. Empowering parents and caregivers with this information can help them in making high-quality decisions for their families — and spur them to push for much-needed teacher quality reforms that will benefit all of our children.

But families shouldn’t have access to this data alone because it isn’t their only concern. As I recommended last week, student surveys should be a key element of evaluating teacher performance — and those student ratings should be published as well. Not only is it an accurate assessment of teacher performance in terms of improving student achievement, it also provides insight into whether a teacher has the empathy for children needed to be successful in their jobs. Considering that the recent Measures of Effective Teaching report has shown that students (who spend as much as 35 hours a week with a given teacher) are likely far better judges of quality than trained observers, parents would find this data especially useful.

Then there are other benefits to releasing Value-Added data. For the teaching profession, it shines a well-deserved light on the work of good-to-great teachers who go without the proper recognition — in the form of wider arrays of compensation and career opportunities — that they so richly deserve, and are often forced by lower-performing colleagues to remain quiet about their achievements (or in the case of the John Taylor Gattos and Jaime Escalantes, forced out of the profession because of jealousy within the ranks). It also serves as the best disinfectant in improving the profession, exposing poor-performing teachers, who are highly paid despite their failures and who help foster cultures of mediocrity in which only some children are considered capable of learning. And publishing this data also serves as an opportunity to spotlight the failures of ed schools who are the underlying reason why laggard teachers enter the profession (and are poorly trained for their jobs) in the first place.

But let’s be clear: Rotherham isn’t alone in opposing the publishing of Value-Added data. Far too many Beltway reformers (along with teacher quality advocates such as Teach For America founder Wendy Kopp) are of the wrongful mindset that this information should be kept under lock and key from families and taxpayers. And as I have said last year, this viewpoint sadly reveals one of the biggest flaws among these players in the school reform movement. For all their talk of bold reform — including demanding the use of value-added teacher performance data in evaluations — they are unwilling to embrace it when the proverbial rubber meets the road. As a result, they are looked upon by other reformers as being paper tigers, only interested in theoretical and policy discussions instead of real-world application of those ideas. This is especially true for grassroots activists and Parent Power advocates (especially those from poor and minority backgrounds), who are intensely interested in this data because their kids are the ones most-subjected to educational neglect and malpractice in failing schools.

[The fact that these reformers can argue that Value-Added is reliable, but are then unwilling to allow for its public dissemination also makes it seem that they are talking out of both sides of their proverbial mouths. For Beltway reformers and those in the teacher quality movement, this is a matter of put up or shut up. If they really believe in the reliability of Value-Added — a fact that has been well-established after three decades of research — then you must support publishing that information. Period. A stance other than that betrays an intellectual inconsistency that can’t hold.]

None of this is to say that I think Rotherham is one of those folks. From passionately defending the No Child Left Behind Act (and the underlying principles of fostering systemic reform), to challenging U.S. Secretary of Education Arne Duncan’s claim that the law’s accountability provisions wrongly penalize well-performing schools, t0 working with organizations that are making reforms reality on the ground, Rotherham has proven himself the kind of thoughtful, action-oriented Beltway reformer his counterparts should strive to be. What I do argue is that there is incongruity between Rotherham’s rightful, thoughtful argument that families should pursue teacher choice (as well as high-quality school options) and his wrongheaded opposition to publishing the very Value-Added data that will help parents in making smarter selections in the first place.

Best of Dropout Nation: Where the Boys Don’t Go in KC’s Sister City

Three Thoughts on Education This Week: Andy's and Bobby's Stand for School Reform