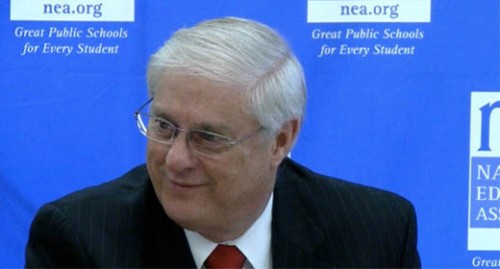 As Dropout Nation reported on Wednesday, the National Education Association reported in its recent U.S. Department of Labor filing that it spent $133 million in 2010-2011 on lobbying and contributions to groups whose agendas (in theory) dovetail with its own. And the list of organizations and players who have benefited from the union’s largesse grows even larger.

The National Council for Accreditation of Teacher Education, a longtime beneficiary of NEA funds, garnered $400,373 from the union during its last fiscal year. The Great Lakes Center for Education, which, like the Economic Policy Institute, always churns out studies that dovetail nicely with NEA positions, got $250,000 from the national union. (Three affiliates — Michigan Education Association, Education Minnesota, and the Illinois Education Association — chipped in another $30,000, according to each of their respective federal filings.) National Board for Professional Teaching Standards got $10,000 from the union last fiscal year. And the University of Colorado at Boulder also picked up $250,000 for a “sponsored project”, likely something being put together by one of the NEA’s longtime fellow-travelers, Kevin Welner’s National Education Policy Center that is based on the university’s campus.

Education professors are also on the list of NEA recipients. Diane Ravitch’s mini-me, Rutgers University professor Bruce Baker, picked up $5,000 from the union. Harvard’s Ronald Ferguson (whose study that called against providing poor and minority children with college preparatory education was the subject of a Dropout Nation commentary) also garnered $5,000. University of Illinois at Chicago scholar David Merriman picked up $12,000 for consulting work, while Richard C. Longworth, a senior scholar on the Chicago Council on Global Affairs, was paid $5,000 for his services. Teachers College professor Madhabi Chatterji also picked up $5,462 for consulting work. And Nobel Laureate Joseph Stiglitz was paid a $20,000 speaking fee.

Old-school civil rights groups also got NEA money: Jesse Jackson’s Rainbow/PUSH received $5,000 in 2010-2011, while the National Black Caucus of State Legislators also got $5,000. The union also tried to reach into the faith-based community, paying Clergy Strategic Alliances LLC $21,000 for such efforts; that firm also does work for the American Federation of Teachers, helping that union put together its Faith in Action task force pow-wow.

The NEA also played a key role in ballot initiatives throughout the country. It paid $150,000 to the Ballot Initiative Strategy Center, which works with progressive groups, for strategizing. The union also handed off $10,000 to Alabama’s Committee for Children, which successfully pushed for the passage of tax renewals in Mobile County and Saraland. And the NEA poured $157,000 into Idahoans for Responsible Education Reform, which is looking to challenge school reforms successfully championed by the state’s school superintendent, Tom Luna, and Gov. Butch Otter earlier this year. The NEA’s Idaho affiliate has worked closely with the group.

Meanwhile a quick perusal of some of the state affiliate filings offer some interesting information on the NEA’s efforts for the 2012 election cycle. The union’s Ohio affiliate, for example, reported that it gave $20,000 to ProgressNow’s Ohio affiliate, and poured another $5 million into We Are Ohio, the group that helped put the kibosh on the Buckeye State’s abolition of collective bargaining. In Michigan, the NEA affiliate there tossed $10,000 to ProgressNow’s Michigan chapter as part of its A Better Michigan Future anti-school reform effort, and tossed $126,500 to the state Democratic party’s 21st Century Fund political action committee. Expect the NEA to pour even more money into ‘progressive’ groups and efforts to protect their collective bargaining privileges next year. (The Florida Education Association, on the other hand, stuck to handing out $41,040 to Barnett Berry’s Center for Teaching Quality.)

Dropout Nation will provide further analysis of NEA financial data in the next few weeks.