The NEA’s Full Disclosure: $133 Million to Preserve Its Influence

RiShawn Biddle
9 Comments on The NEA’s Full Disclosure: $133 Million to Preserve Its Influence 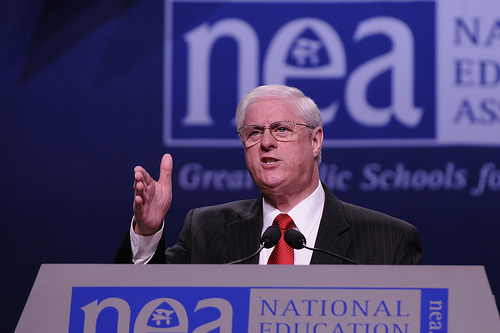 Dropout Nation just got a hold of the National Education Associaton’s 2010-2011 LM-2 filing with the National Education Association. The numbers are spectacular. The nation’s largest teachers’ union spent $133 million in 2010-2011 on lobbying and contributions to groups whose agendas (in theory) dovetail with its own. This included $255,000 to the Economic Policy Institute, the progressive think tank cofounded by Robert Kuttner and Robert Reich, whose education reports generally take a pro-NEA slant; $40,000 to Al Sharpton’s National Action Network (a leading advocate for the charter schools the NEA opposes so virulently); and $5,000 to the National Coalition on Black Civic Participation, whose board members includes Elsie Scott, CEO of the Congressional Black Caucus Foundation. The NAACP also hit it big, collecting $25,000 from the union this past fiscal year. Center for American Progress also collected some NEA cash, receiving $25,000; so did Barnett Berry’s Center for Teaching Quality, which garnered $318,848 from the union last fiscal year.

Among the big recipients of the NEA’s largesse this year were ProgressNow’s affiliates in Michigan and Colorado, each receiving, respectively, $10,000 and $125,000, for education policy advocacy and legislative advocacy activities. ProgressNow, by the way, was one of the key players in ousting school reform-minded Michigan legislator Paul Scott from his statehouse seat earlier this month and has decried Gov. Rick Snyder’s efforts to allow for the expansion of charter schools and school choice. Another outfit, Progressive Majority, collected $46,625 from the union in 2010-2011 so it can develop its membership communications strategy. The NEA also gave Progressive Future $100,000 for “Ed policy issue advocacy”. By the way: The NEA found time to hand off $10,000 to the Republican Main Street Partnership for its legislative policy development activities.

The usual suspects are also on the list: Communities for Quality Education, which has long been subsidized by the NEA, collected $1 million in 2010-2011. Anti-testing group FairTest picked up $35,000 this time around. So are some leading education traditionalists: Parents Across America co-founder) Leonie Haimson’s Class Size Matters (which has once-respectable education historian Diane Ravitch on its board) picked up $25,000 from the union last fiscal year, while Western Michigan’s Gary Miron (whose rather flawed study on KIPP’s charter schools earlier this year was the subject of Dropout Nation‘s analysis) picked up $5,000. Meanwhile the NEA directly poured $43,000 into the Save Our Schools rally held this past July; this doesn’t include dollars poured in by state and local affiliates.

How much did NEA President Dennis Van Roekel make last fiscal year? He made $460,060, a 16 percent increase over the previous year, while his major domo, Lily Eskelson, collected $371,904, a 14 percent increase. Only union Treasurer Rebecca Pringle earned less money over the previous year, picking up $325,384 last fiscal year, a 5 percent decrease over 2009-2010.

Overall, the NEA collected $399 million in dues and other revenues in 2010-2011, barely budging from revenue numbers last year. This despite a four percent decline in membership, from 3.3 million members in 2009-2010 to 3.2 million in 2010-2011. The revenue stream included $3.1 million in income from NEA Member Benefits, the controversial affiliate that peddles annuities and other financial instruments to its members. It also managed to recover $122,808 from one of the two former employees the union fired in 2010 after discovering they had siphoned off $227,626 in member dollars over five years; as your editor reported last week for RealClearPolitics.com, the NEA refused to further disclose how such lax fiscal control activity could happen for such a long time.

Dropout Nation will further analyze the NEA’s filing over the next few weeks. You can also check out the filing for yourself.