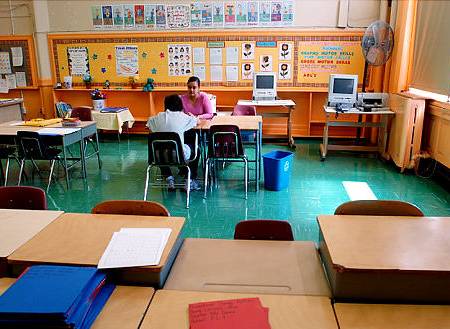 When the Los Angeles Times released it value-added analysis of teacher performance data based on student test scores(and the names of the teachers whose work was analyzed) last year, some school reformers, including American Enterprise Institute scholar Rick Hess, surprisingly joined education traditionalists in opposing the effort. Why? From his perspective, there’s no reason to make such data transparent, and that the data itself is too imperfect for public dissemination. As your Dropout Nation editor showed, Hess’ arguments didn’t stand up to scrutiny.

So it wasn’t surprising when Hess and others joined common cause  last week with the American Federation of Teachers’ New York City local to decry the New York State Appellate Division’s decision to allow the New York City Department of Education to release value-added data on individual teacher performance to media outlets and the public. And once again, the objections raised by Hess, other reformers who share his thinking, and education traditionalists, are off-target.

The first argument — that releasing the data serves no compelling public interest — is most-certainly off base. For taxpayers and for families who subsidize New York City’s public school system to the tune of $24 billion a year — most of it spent on teacher salaries and benefits — knowing how well teachers are performing in classrooms is certainly important. Releasing this data is essentially no different than disseminating salary data (which, as the husband of a former state government worker whose salary was exposed by the paper for which he had worked, I know how discomforting this can be). And given that school districts are government agencies accountable to taxpayers — and that New York State law doesn’t ban such release of data (and shouldn’t) — the decision by the Appellate Division is the right one.

For families, there is certainly a compelling interest for knowing the individual success of teachers in improving student performance. After all, they are finally learning what has been emerging as fact for some time: That the quality of a child’s education can vary from classroom to classroom. Even in the best-performing schools, traditional, charter or private, there are high-quality teachers working across the way from those who need help improving their instruction, and those who don’t need to be in classrooms at all. Contrary to what Hess and other foes of releasing teacher performance data may think, empowering parents and caregivers with this information can help them in making high-quality decisions for their families — and spur them to push for much-needed teacher quality reforms that will benefit all of our children.

If anything, releasing the data addresses one of the biggest problems in American public education: The fact that school data is largely a black box, with reporting mostly geared toward compliance instead of helping parents make smart educational decisions. For most parents, the data that is most-important for them is that about the teachers who instruct their kids every given day in the school year. By releasing this data, we finally get parents into important conversations about teacher quality that need to be had — and also take the next step in helping them attain their rightful roles as lead decision-makers in education.

Then there are the benefits of releasing this data for good-to-great teachers. For far too long, high-quality teachers have gone without the proper recognition — both in higher salaries and other rewards — for their success in the classroom. They never get the full recognition (or the wide range of compensation and career opportunities) they so richly deserve. Even worse, because we don’t recognize those teachers, they are often  forced by their colleagues to remain quiet about their achievements (or in the case of the John Taylor Gattos and Jaime Escalantes, forced out of the profession because of jealousy within the ranks).

Meanwhile they have had to serve alongside poor-performing teachers, who have lurked in the shadows, aided and abetted by teachers unions, administrators and colleagues who instinctively (if not quantitatively) knew better and did nothing. These teachers, who have gained near-lifetime employment (through tenure) just after three years on the job, are paid as much as $100,049 a year, and get nearly-free healthcare benefits and defined-benefit pensions, are a burden on taxpayers and colleagues alike. And because they help foster cultures of mediocrity in which only some children are considered capable of learning, they reap comfortable compensation at the expense of young boys and girls, many of whom will never enjoy the kind of middle-class salaries and strong job protections.

This isn’t to say that the data is perfect. But value-added analysis has stood up to three decades of scrutiny. As the work of Dan Goldhaber, Jonah Rockoff and others have shown, the data generally remains consistent over time. The arguments made by Hess, other reformers, and opponents of teacher quality reform against such uses are mere hogwash. The solution to the question of data quality is to improve the quality of data, not keep it from being released to the public. And to not use student test data in evaluating teachers, especially when it stands up to scrutiny, is just plain doing a disservice to families, teachers and children.

One can understand why AFT and National Education Association affiliates oppose releasing this data. After all, for them, it is the pursuit of perfection at the expense of the good of improving education for children, largely because the second goal is of secondary importance to them. As for Hess and other reformers who agree with this stance? This is a different story.

The unwillingness to support releasing such data proves one of the problems with some reformers: For all their talk of bold reform — including demanding the use of value-added teacher performance data in evaluations — they are unwilling to embrace it when the proverbial rubber meets the road. As a result, they are looked upon by other elements of the reform movement as being paper tigers, only interested in theoretical and policy discussions instead of real-world application of those ideas.

Releasing this teacher data is the right thing for everyone — and especially our children. Hess and other reformers opposed to the idea should be celebrating its release and developing ideas for improving the use of this data.