How the AFT Has Awakened the Parent Power Movement 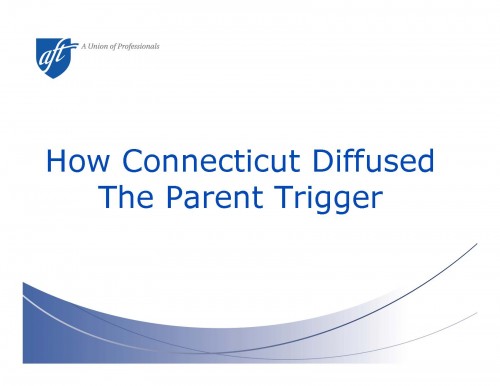 Last year, it would have been unimaginable that the array of Parent Power groups working on school reform today would have held a press conference, much less have been considered a threat to affiliates of the American Federation of Teachers, the National Education Association and other education traditionalists. But as Parent Revolution, the Connecticut Parents Union, Buffalo ReformEd, and the Texas Parents Union spent yesterday discussing the obstacles they have faced in passing versions of Parent Trigger laws in California, the Nutmeg State and the Lone Star State, one thing is certainly clear: The AFT presentation has awoken Parent Power advocates to the reality that they will have to get savvy in order to beat back the opposition.

As you know by now, Dropout Nation revealed last week that the AFT held a presentation last month at its TEACH 2011 conference that detailed how its Connecticut affiliate first attempted to “kill”, then weakened the state’s Parent Trigger law — the second in the nation — by working to exclude Parent Power groups from the table. The union has since taken down the embarrassing presentation, and its president, Randi Weingarten, has issued a non-apology apology distancing herself from the language in the piece, but backing the tactics. But not before outlets such as the Wall Street Journal, the Daily News, National Review and Hartford Courant‘s Rick Green called the union out for its cynical tactics.

Parent Power activists went further yesterday, demanding that Weingarten offer a full apology for the presentation and for the union’s triangulation of school reform. Parent Revolution, in particular, was especially annoyed given that the organization has stood by the AFT and the NEA during the efforts by the two unions earlier this year to stop Wisconsin by abolishing the state’s collective bargaining law. Former California state senator Gloria Romero, an AFT member authored the nation’s first Parent Trigger law two years ago and now runs the California branch of Democrats for Education Reform, was also displeased that the AFT presentation mentioned her by name. She demanded that Weingarten offer the apology and reveal what opposition research have they done on her. (Romero has also requested an apology in writing.) Chances are that neither request will ever be met. But it does once again make clear that Weingarten’s triangulation effort hasn’t worked.

Meanwhile Parent Power activists in Texas and California revealed the gamesmanship they had to confront during their efforts. Mike Prewitt of the Texas Parents Union noted that a more-aggressive Parent Trigger plan, contained in an amendment proposed by state Rep. Mike Villareal (D-San Antonio) that would have applied only to that city and surrounding Bexar County was kiboshed after his colleagues and school district officials from the county aggressively attacked it. Romero noted the heavy opposition to Parent Trigger in California; her former colleague, state Rep. Julia Brownley had once proposed a bill that would allow parents to attend school board meetings, also known as something they can already do. Hannya Boulos of Buffalo ReformEd noted how quickly Catherine Nolan, the New York State Assembly’s education chair, withdrew her support from providing parents in that city with a Parent Trigger once opposition became fierce. And Samuel noted the continuing efforts to weaken the state’s Parent Trigger law — including the move earlier this year to exclude seven schools in a partnership controlled by it and the NEA’s affiliate there from the law.

Of course, the efforts to stop Parent Trigger laws and keep families away from education decisionmaking are nothing new — and this isn’t just a matter that can be solely blamed on either the AFT or NEA. Keeping parents out of education decision-making has been one of the dominant themes in education over the past six decades. The most-famous of the proto-Parent Power efforts, the 1968 battle between the parent-controlled Ocean Hill-Brownsville school board and the AFT’s New York City local then led by future national AFT president Albert Shanker, proved that when it came to families, political leaders and school officials are as happy as unions to have parents, especially those poor and minority backgrounds, rarely seen and never heard. As Temple University Professor William W. Cutler III noted in Parents and Schools: The 150-year struggle for control in American education, giving parents real power — especially the Virginia Walden Fords, Malkin Dares and other noisy parent power activists — has never been in the plans. That generation of what we would now call Parent Power activists realized that they were getting the short end of the stick, but had few tools available to wage a strong fight.

This latest, and more-successful, effort is one that has slowly been forming within the past two decades. The successful effort by then-Milwaukee Superintendent Howard Fuller and Mayor John Norquist in 1990 to launch the nation’s first school voucher program opened up the possibility that parents can actually make real and thoughtful choices in shaping education for their children. The advent of the charter school movement a year later began opening up new options for families, especially poor black, white, Latino and Asian households, to escape the worst American public education offers.

The real move toward Parent Power began back in 2007 when Steve Barr and the Green Dot charter school chain, at the behest of Latino families in the neighborhoods surrounding the troubled and rioting-wracked Thomas Jefferson High School, worked with parents there to take advantage of a clause in a state law that allows for school districts to convert their schools into charters. When the Los Angeles Unified School District, which ran the school, refused the families’ petition to convert Jefferson into a charter, Barr organized what is now Parent Revolution and began efforts to convert other LAUSD schools into charters. This ultimately led to Green Dot’s successful takeover of Locke High, and L.A. Unified’s current effort to expand the number of charters and hand off another 200 of its own schools to families, either working with the AFT local there or with charter operators.

By 2009, in a rare moment of bipartisan thoughtfulness and functional action in a state known for anything but, California’s legislature and then-Gov. Arnold Schwarzenegger enacted the state’s Parent Trigger law. That stunning success put the AFT, the NEA and education traditionalists on the defensive, especially as Parent Power activists in Connecticut, New York, Texas and elsewhere began agitating for their own versions of Parent Trigger laws. As the AFT presentation (along with other evidence) has shown, rhetoric such as that of Marty Hittleman, the AFT’s former California boss, who declared that Parent Trigger was “a lynch mob provision” has only gotten more heated.

The AFT presentation has certainly awoken Parent Power activists to the reality that they will have to fight as bare-knuckled as those who oppose them. This means going as far as filing lawsuits similar to those logged by school funding activists, a suggestion made by both Dropout Nation and Heartland Institute scholar Bruno Behrend in today’s Conversation podcast. It also means they must gather together in networks in order to not only players at the bargaining table, but remind everyone that families are the only ones who solely have the best interests of their children at heart. As Romero declared in a response to a question from Kathryn Baron of Thoughts on Public Education: “Parents are not just another bargaining group at the table. They are parents. We go to them for school bond issues… Parents are the architects of children’s futures.”

Meanwhile the AFT affair serves as a lesson for other school reformers — especially the Beltway crowd who have been thoughtlessly silent about the entire fracas for obvious reasons. If they want systemic reform to move from policy to reality, they must join together with Parent Power reformers and other grassroots activists in order it happen. Those who are more-reluctant to embrace Parent Trigger must stop arguing with themselves about why it cannot work and work together with grassroots reformers to make the laws effective in practice. This includes reforming the nation’s school data systems and even developing neighborhood centers where parents can learn more about what high-quality education should look like (and, more importantly, how to get it). As Samuel puts it: “When they know better, they do better”

It is time to stop treating families as third-class citizens in education. And the AFT may have inadvertently awaken frustrated families angry by deliberate efforts to keep them from helping their children — and all kids — get what they deserve.

Jay Mathews Gets It Wrong on Parent Power

The Conversation at Dropout Nation: Bruno Behrend on Parent Trigger and School Choice