Voices of the Dropout Nation in Quotes: The Surreal Thinking of Education’s Status Quo

Dropout Nation Editorial Board
Comments Off on Voices of the Dropout Nation in Quotes: The Surreal Thinking of Education’s Status Quo 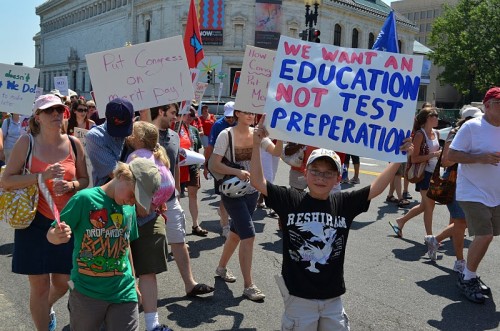 Duncan’s approach to being secretary of education has been to focus on education—specifically, turning around chronically low-performing schools, improving the quality of academic standards and tests, judging teachers by their success in the classroom, and supporting innovative school models, including charter schools. Was there a rally somewhere else on the Mall denouncing Secretary of Agriculture Tom Vilsack for focusing too much on the national free- and reduced-price school lunch program and not enough on better curricula in 6th grade math?

Kevin Carey, on the shoddy, surreal thinking of the Save Our Schools marchers.

The message from [Randi] Weingarten and the AFT is clear: We love the ends, but we can’t celebrate the means in public. Weingarten has issued a classic ‘non-apology apology,’ which should be familiar to anyone who has ever had a fight with a loved one. There’s a big difference between “I’m sorry” and “I’m sorry that you’re mad.”

Matthew K. Tabor on the American Federation of Teacher’s struggle to triangulate (and beat back) Parent Power and school reform. Not that you didn’t already know.

Turns out U.S. schools will not achieve an 82 percent [No Child Left Behind Act AYP] failure rate, despite [U.S. Department of Education’s] predictions from March. Lack of outrage re: the 82 percent hoax by some who knew better [equals] case study of the fundamental mindset problems that make #edreform so difficult… But even some pro-accountability folks were not so bothered by 82 percent hoax. Once phony numbers are considered de rigeur, why bother?

Democrats for Education Reform’s Charlie Barone, on one of the less-successful (and embarrassing) tactics U.S. Secretary of Education Arne Duncan used to push for a speedy reauthorization of No Child on the Obama administration’s terms.

In general, existing institutions don’t want to be fixed.  There are reasons why current public schools operate as they do and the people who benefit from that will resist any effort to change it.  Those who benefit from status quo arrangements also tend to be better positioned than reformers to repel attempts by outsiders to make significant changes.  The history of education reform is littered with failed efforts by philanthropists. Instead, private donors have had much better success addressing problems by building new institutions.  And competition from newly built institutions can have a greater positive impact on existing institutions than trying to reform them directly.

Jay P. Greene, offering an alternative to the current strategy pursued by the Gates Foundation and other reform-minded philanthropies. Of course, Gates does some of this already.