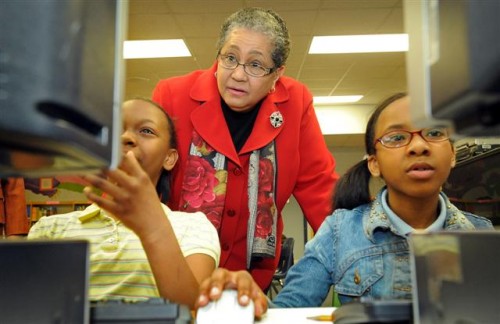 When You Use the Indefensible to Defend the Status Quo: Plenty has already been said about the cheating scandal at the Atlanta school district. And, as one would expect, education traditionalists such as American Federation of Teachers President Randi Weingarten and Diane Ravitch proclaimed that the mess proved that standardized testing leads to perverse incentives that force teachers to behave unethically, provide low-quality instruction, and ultimately, poorly serve the children in their care.

Considering that test cheating is rare — found in just five percent of elementary schools every year — this argument is ridiculous; most teachers and principals, regardless of their views on standardized testing or their level of talent and care for  children, behave ethically. States and school districts can easily take steps used by the U.S. Department of Education, ACT, and the College Board and Educational Testing Service to ensure that such unethical activities are caught and punished immediately. The Atlanta scandal guarantees that more states will take such steps, keep close tabs on districts and make cheating less of an inevitability.

More importantly, what education traditionalists are doing is simply trying to let teachers and principals off the hook for actually doing their job: Ensuring that every child gets a high-quality education, is proficient in reading and math, and has the skills they need to succeed in traditional and technical colleges, and in the working world. Certainly, teaching is a difficult career, and becoming even more challenging; there are plenty of teachers who are learning that they lack the subject-matter knowledge, instructional competence, entrepreneurial drive, zeal for improving the lives of children and empathy for kids of all backgrounds needed to be high-quality instructors.  There are also principals who now realize that they cannot handle the complexities of leading schools in an age in which using data to support the work of good-to-great teachers, get rid of laggards, and revamp school activities, is more critical than ever. They should leave the profession. Supporting efforts to cheat kids out of accurate and honest assessment of their achievement — and denying them a high-quality instruction — is unacceptable and should not be used by anyone to justify their opposition to reform.

Meanwhile the Atlanta cheating scandal, massive as it is, pales in comparison to the pervasive practices in American public education that deny far too many children the high-quality education they deserve. Start with social promotion, which is used by teachers and administrators to let children progress from one grade to another even when they are falling behind academically and need sustained, immediate remediation in order to get to grade level. Or the overuse of out-of-school suspensions and expulsions, which allow schools to avoid addressing their failure to educate kids — especially young black, white and Latino men — who on the path to dropping out. Given that most out-of-school suspensions are for issues other than violent behavior, it is inexcusable that as 28-percent of young black men in middle-school are suspended, levels far higher than for the overall population. And don’t forget the overlabeling of young men as special ed cases when, in most cases, the underlying issue is their functional illiteracy; school districts that should focus on improving their reading instruction and curricula simply ignore the problems to the peril of children.

Each and every day in America, laggard instructors and principals in failure mills and dropout factories cheat millions of children out of a high-quality education. If not for standardized testing, advancements in the use of school data, and efforts to hold schools accountable, this kind of cheating wouldn’t be addressed at all.

The teachers involved in the Atlanta scandal deserve to lose their jobs; so do the principals and administrators involved in the effort. They cheated our children of a high-quality education and accurate measurement of their academic achievement. But to blame this matter on the use of standardized testing and school data in overhauling failure factories is mere excuse-making by those who ought to know better. It also ignores the other, more-pervasive and equally malignant forms of cheating that go on every day in far too many of our schools. Demanding that those who work in American public education provide high-quality education to our children — and being held accountable for it — is the least we can do so that every child has the knowledge they need to write their own story.

When Your Argument of Teacher-Bashing Lacks Merit: Earlier this week, AFT President Weingarten took the stage at the union’s twice-yearly teacher conference to declare that school reformers couldn’t hack it in a traditional classroom. Given that the Cornell- and Cardozo Law School-trained attorney spent just ten months (over a period of six years) teaching in a classroom — less time than Michelle Rhee’s tenure working in Baltimore’s public schools — she hardly has any standing to say much of anything. Since Dropout Nation doesn’t measure the validity or value of ideas by seat time, this publication will let her hypocrisy go.

What really stood out was her assertion that only teachers should be the ones leading education and pushing for the weak gruel of reform that the AFT supports. Those folks who have been engaged in systemic reform (including, apparently, some teachers) merely want to “denigrate our profession.”

Weingarten’s claptrap isn’t anything new or even interesting. She’s just using a rhetorical trick often deployed by teachers unions and other education traditionalists to oppose school reform. They declare that any criticism of the unions and any effort to overhaul teacher quality are forms of “teacher bashing”. And such proclamations end up forcing reformers onto their heels when they should actually take these critics to the woodshed.

What reformers should do is actually reveal that the claims of teacher bashing are ridiculous for three reasons. For one, the claims fail to consider the fact that in most states, teachers are forced to either join NEA or AFT locals, or pay union dues to them no matter their preference. That the union dues are then used to fuel the lobbying and campaign donation activities that these teachers may not necessarily support means that these teachers are actually being served poorly by the very unions they are forced to subsidize with their hard-earned salaries.

The teacher bashing trick conveniently ignores the generational divide between Baby Boomers teachers (who want to keep the quality-blind system of recruiting, training, retaining and paying instructors in place) and younger colleagues more-supportive of school reform. It is this division among teachers — which often plays out in debates such as that between the AFT’s New York City local and rank-and-file members who are part of the school reform group Educators 4 Excellence — that is one of the reasons why Weingarten, for all her rhetoric, is attempting to triangulate the school reform movement and pushing her members to embrace some reforms such as the use of standardized tests in evaluating teachers.

Finally, the teacher bashing argument fails to admit these realities: That there are laggard instructors in our classrooms who shouldn’t be there continuing to academically abuse and neglect children. That America’s ed schools are doing an abysmal job of recruiting and training aspiring teachers. That the traditional teacher compensation system, focused on rewarding teachers based on seniority and degree attainment, is ineffective in spurring student achievement, fails to reward good-to-great teachers and keeps laggards in classrooms to continue educational malpractice. And that keeping things as they are is too costly for students, families, high-quality teachers and taxpayers alike.

School reformers should always keep these facts in mind whenever some education traditionalist declares that criticism of teachers unions and laggard teachers equal the denigration of an entire profession. And then call them out fast and furious for their balderdash.

When Your Opposition to Accountability Lacks Substance: One of the numerous bits of wisdom my grandmother imparted to me during her latter years is this: When someone says it’s nothing personal, it really is. If it isn’t, then you never have to say so. So the tenor of Andrew Coulson’s latest response to last week’s Dropout Nation critique of his opposition to federal accountability and the No Child Left Behind Act speaks for itself. Because of the type of response that it is, I will simply address the substance of his argument.

I’d love to say that Coulson offers at least the semblance of an argument based on any data. Unfortunately, he does not.  He declares that No Child exacerbated gamesmanship by states even though he offers no evidence of this. Given the paucity of data on how states set their academic standards, if anything, one can only say that states have been doing this for the past four decades.

He also cites James Heckman’s 2007 study on trends in graduation rates to declare that No Child has actually encouraged states to game graduation rates. Heckman’s conclusion could, at best, be only called a hypothesis; after all, Heckman based his conclusions off enrollment data from the National Educational Longitudinal Study, which is a sample survey that doesn’t fully reflect the graduation rates states actually reported. As Heckman even noted in his report, graduation rates for black males culled from the NELS report were higher than that for females, an anomaly that isn’t reflected in other data he used to estimate graduation and retention.

This isn’t to say that states weren’t gaming graduation rate data; as research from Jay P. Greene, Christopher Swanson, Robert Balfanz and Michael Holzman had shown in the last decade, states had spent decades reporting inflated graduation numbers. But in the past six years, states have begun revising those numbers to reflect reality. This wouldn’t have happened if not for  No Child, which forced states to begin breaking out graduation rates, allowing for school reformers and researchers to prove that states were hiding the extent of the nation’s high school dropout crisis.

Coulson, of course, understands this. After all, in his response, he made his point by offering up Heckman, a critic of No Child who believes the law doesn’t focus enough on expanded Pre-K, his silver bullet for solving the nation’s education crisis, and doesn’t target other factors he thinks is involved in student academic development. Coulson was being selective in his use of evidence to back his claims, something that any smart polemicist, advocate or ideologue would do. It isn’t something that an analyst objectively observing data and coming up with nuanced conclusions would offer.

This isn’t to say that Coulson’s data is necessarily inaccurate. As I noted last year in my analysis of the Century Foundation’s own report on the impact of socioeconomic integration in Montgomery County (Md.) schools, one can conduct objective research and gather reliable data and still come up with conclusions that don’t square with the facts because of their ideology or the policy positions they have already taken.

That is all from where I sit. I am flattered that Coulson deemed it important to spend his time attempting to swat at this publication — and provide it with plenty of new unique readers — than on pursuits (especially at Cato) that would give his shop more prominence in the school reform arena.

Best of Dropout Nation: The Economic Importance of High-Quality Curricula