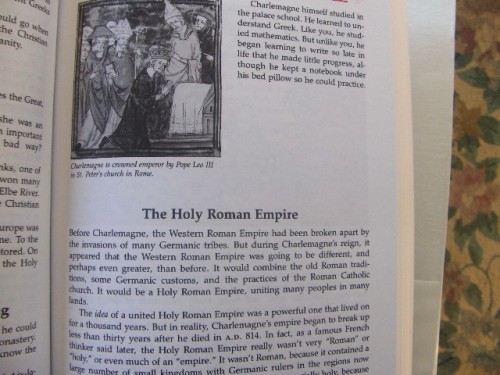 As a element of the curriculum reform movement, Core Knowledge is one of the best inproviding rigorous, high-quality content to students. I am as much a fan of it as most school reformers. On the other hand, the criticisms of the rest of the school reform movement by its advocates can sometimes be so lacking in thoughtfulness that eyes roll and mouths sighs.

This is especially true when it comes to teacher quality reform. From Dan Willingham’s video rant that value-added measurement of student data shouldn’t be used in evaluating teachers (despite the fact that the method stands up to overall scrutiny as a tool in measuring teacher performance) to resident mouthpiece Robert Pondisco’s complaints about efforts to improve teaching by such gurus as Doug Lemov and Steve Farr, the essential argument posited by the Core Knowledge crowd is that systemic reform of how we recruit, train, compensate and evaluate teachers is rather meaningless. In fact, one would dare surmise that they think the status quo is perfectly fine (even if it endangers the futures of the children about which they care).

From where the Core Knowledge crowd sits, the focus should mostly be on improving the quality of curricula (preferably what they offer) with some small stabs at better training of — and support for — teachers. At the heart of their argument is the belief that teachers aren’t part of the problem; what should be done is make teachers in the classroom more effective at their work with high-quality curricula and better support. Once that is done, student achievement will improve.

Yet the formula for reform offered by Core Knowledge is also essentially flawed. Why? Because it essentially declares that curriculum is the silver bullet of school reform while ignoring the importance of teacher quality.

As my colleague, Steve Peha, touched upon in his piece yesterday on the importance of improving literacy as part of school reform (and as I have also hit upon in the past to Pondisco’s annoyance), it is easy to talk about the importance of background knowledge in literacy. It is more difficult to actually provide the kind of high-quality instruction needed to help kids learn it. The teacher needs to have strong subject-matter competency, empathy for children, a mindset of high expectations, good classroom management skills, and strong instructional methods that helps kids memorize and think through what they have learned. And the teacher usually needs all this in place at a base level before they enter the classroom. Handing teachers a high-quality curriculum alone won’t work.

Here’s the thing: A high-quality teacher with a poorly constructed curricula will not achieve all that she can in improving student achievement. But as proven by great teachers such as Jaime Escalante and John Taylor Gatto, high-quality teachers usually have the capability to overcome these issues or at least just muddle through; they usually have the tools — including subject-matter competency — needed for both instruction and curriculum development. They would achieve even better results with high-quality curriculum, but they will still get great results because they have what it takes to succeed in the classroom.

On the other side, a low-quality teacher with a high-quality curriculum will still be a lousy teacher. They will not have the talent needed to improve student achievement. As we have learned over the past couple of decades thanks to the studies of Dan Goldhaber (along with recent reports such as the Los Angeles Times’ series on teacher quality in Los Angeles Unified schools), teacher performance doesn’t improve significantly after the four years. While better instructional methods, stronger support and better curriculum may help laggard teachers overcome some of their deficiencies, none of this will paper over the reality that they shouldn’t be teaching in the first place.

This isn’t to say that curricula isn’t critical. Dropout Nation has made the point that all children need high-quality curricula (including that provided by Core Knowledge) alongside high-quality teaching, strong school leadership, school choice, parent power, and high expectations in order to foster the cultures of geniuses needed for all children to succeed in school and life. The point is that there is no one silver bullet; every element is needed.The Core Knowledge crowd aren’t the only ones who overstate the importance of one element of reform and forget the rest; the only-one-solution mindset is a problem endemic to the entire school reform movement. But in shortchanging the importance of teacher quality, the Core Knowledge gang are also weakening the impact of their own silver bullet. All that great curricula goes to waste when it ends up in the hands of laggard teachers (and atrocious schools).

Let’s give Willingham, Pondisco and founding father E.D. Hirsch credit. They are emphasizing an important element of reforming American public education that doesn’t always get the attention it deserves from the Beltway reformers and the teacher quality crowd. At the same time, they shortchange the importance of improving the quality of America’s teaching corps. As Adlai Stevenson would say, their efforts on reforming curriculum is appealing, but their shortsightedness on teacher quality is absolutely appalling.