Education Governance This is Dropout Nation

This is Dropout Nation: Jersey City’s Lessons in School Finance 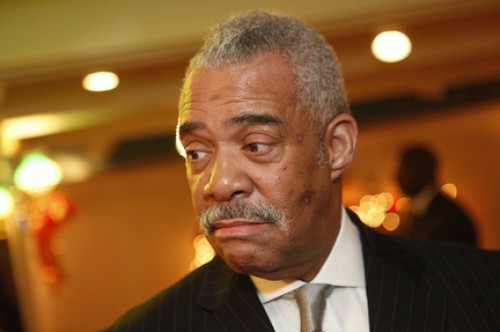 Jersey City schools boss Charles Epps (along with state officials) has presided over overspending and failure. Photo courtesy of the Jersey Journal.

Thanks to the Abbott school funding equity legal decisions that increased the level of state funding to the Garden State’s urban schools, Jersey City Public Schools has seen its spending increase by 68 percent between 1998-1999 and 2007-2008.  The hard-scrabble district spent $277 million more now than it did ten years earlier — and with 79 percent of its revenue coming from the state (versus the 41 percent statewide average), is more dependent on the state than on property taxes. Based on such increases (and the greater financial presence of the state), one would think Jersey City will have improved student achievement, graduation rates and its Promoting Power numbers? Well, the answer is “not really.” 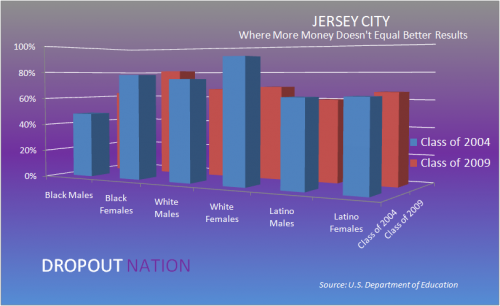 The good news is that more young black men and women are being promoted from middle school to senior year of high school. Sixty-three percent of the young black male 8th-graders  in the original Class of 2009 made it to senior year of high school, versus a far-more-atrocious 48 percent for the Class of 2004; the Promoting Power rate for young black females in the Class of 2009 was 81 percent, three points higher than for the graduating class five years earlier. Sixty-six percent of young Latino women were promoted in 2009 versus 64  percent in 2004. Yet the Promoting Power rates for other students went into decline. Just 67 percent of young white men made it to senior year of high school in 2009 versus 75 percent for their peers five years earlier; just 64 percent of Latino men were promoted in 2009, two points below the Promoting Power rate five years ago. The biggest decline was among young white women: Only 69 percent of young white females were promoted in 2009 versus 91 percent in 2004.

Such lack of results shouldn’t be surprising. As Dropout Nation discussed in this week’s podcast (and I noted in my latest American Spectator column), school funding isn’t exactly the problem that many make it out to be. Overall, funding for the nation’s public schools increased by 16 percent between 2000 and 2007; it’s only in the past couple of years that some states have begun to take scalpels to school appropriations. Even with that, the federal government has come in and helped soften those blows with a series of bailouts — including $95 billion from the American Recovery and Reinvestment Act last year and $10 billion delivered in July courtesy of the federal Edujobs package. But much of school funding is wasted, trapped in bureaucratic messes and in practices that do little for the kids in the care of schools. The fact that neither districts nor states are good at operating schools also means that even more money ends up being wasted.

This is exemplified in Jersey City, whose superintendent, New Jersey State Assemblyman Charles Epps has come under fire throughout his 10 years in the job for overspending on school overtime, a $20,995 trip to the United Kingdom funded on the district’s dime, and the district’s systemic academic failure. Given that Jersey City has spent most of this time under state control, it also shows the ineffectiveness of state takeovers of school systems. School administrative costs increased by 76 percent between 1999 and 2008, with the district spending $25 million a year on central office salaries; general administrative costs increased by 27 percent in that same period. Meanwhile Jersey City spent $20 million on staff support in 2007-2008, a 202 percent increase in the past decade.

The biggest cost increase has come in teacher benefits and retirement costs. Jersey City spent $86 million on benefits in 2007-2008, a 184 percent increase over the amount spent in 1998-1999 (and greater than the two-fold average increase in benefits costs nationwide in that same period). This isn’t just the fault of the district’s central office and the National Education Association local there. As with most states, New Jersey has engaged in lavish dealmaking with teachers unions and school districts, making pensions and retiree healthcare more generous while hoping that stock market gains would offset those costs. But now, with the state’s teacher pension struggling with a$46 billion deficit (and a retiree healthcare liability that is almost as massive), more school funding will end up paying for retired teacher annuities at the expense of student achievement.

The story of Jersey City is also that of the failure of  the antiquated model of district-based public education. As states have taken over the greater share of school funding (with 48 percent of funding coming from state coffers nationwide and even more for urban districts), the need for districts has diminished; if anything, eliminating districts would help foster school choice by allowing students to go to any school anywhere without regard to boundaries. Yet, the indecision over whether school district/local control model of education should be continue to exist or should be abandoned altogether has created opportunities for runaway spending without responsibility. Because they still exist, districts can often behave with little accountability, declaring that they shouldn’t be subject to federal or state oversight (and accountability measures such as the No Child Left Behind Act) even as they become more dependent on the funds. Since the districts also still depend on local tax dollars, they can also justify opposition to school choice; after all, choice means loss of tax dollars to their coffers.

In the case of urban districts that are nearly fully-funded by states (thanks to equity and adequacy torts), the districts can spend with even less accountability to the state. Since local tax dollars aren’t the major source of revenue (and local taxpayers don’t bear the full burden of the waste), the districts can also remain inefficient and unaccountable to their communities. This is especially true when it comes to parents; the bureaucracies can treat them as even bigger afterthoughts and nuisances than they usually do. But state takeovers — the condition under which Jersey City has operated for most of this period — hasn’t proven to be any better. The spending booms for the district came under what was supposed to be a watchful eye. The reality that state education departments just don’t have the capacity for running school systems much less oversee them.

Spending more isn’t going to solve Jersey City’s academic failures — and that lesson also goes for the nation. The same is true when it comes to maintaining an antiquated public education system. Systemic reforms, including in teacher quality, curricula and reading instruction, are the long-term solutions for eliminating dropout factories. And it might be time for the Hollywood Model of Education.

Voices of the Dropout Nation in Quotes: Lost Generations