school data This is Dropout Nation

Why Newark Isn’t a Success Story for Funding Equity Advocates

The problem of advocating for a mostly-discredited position is that there is no evidence to support it. The best evidence you may have to prove the point is often not good enough to prove anything — especially when one looks more-closely at the example of success you tout. Sadly, in the education reform debate today, there are too many instances of this being offered by opponents of school reform (even as they declare that their opponents are engaging in simplistic debate when this isn’t so).

Such is the case of Bruce Baker, who runs the site School Finance 101, who wasn’t too happy with my critique of the NAACP and my general argument that school funding equity and adequacy suits haven’t exactly done anything to improve student achievement (or equal opportunity in education) among the poorest students. The result was a rather long bit of claptrap that danced around some issues (his attempt to argue that the school funding equity effort in Kansas City really didn’t happen is laughable and not even worth dissecting; using a length of time argument, as both Baker and Preston Green, the author of the source study the former cites, is the kind of fairytale-telling that shouldn’t be allowed in an academic text), obfuscated others (using the weak charter school environment in Kansas City as an example of charter school failure) and a headline that shows that his humor hasn’t advanced beyond the lameness of grade school. If not for the fact that it showed up on my lengthy list of incoming links (including Rick Hess’ link back to my interview with likely House Education and Labor Committee chairman John Kline), I wouldn’t have even noticed his comments.

What was interesting about Baker’s piece was his attempt to make Newark — one of the biggest recipients of school funding through the notorious (and long-running) Abbott tort — as a qualified hallmark of success. The fact that the black male graduation rate for Newark students is just trending above the educational Mendoza line of 60 percent is one example that this isn’t so. The ten percent college participation rate for the students that do graduate from Newark’s schools also shows that the district is no poster child for equity/adequacy tort success.  But given the lack of evidence that can be mustered by school funding equity advocates, any small example is good enough because most people won’t look too hard at the reality.

In this case, I did. I kept it simple by looking at the ultimate evidence of student achievement: Do the kids in Newark’s schools progress from 8th grade to 12th grade (and eventually to graduation)? This matters as much (if not more) than test score results because of the nature of how most school districts operate. Thanks to the practice of social promotion, kids can pass on from grade to grade until they leave middle school even if their academic performance (including test scores, classroom grades and attendance) are in free-fall. But once a kid gets into high school, they must earn credits — that is, prove that they can actually perform — in order to graduate. The students who are doing poorly end up being stuck in ninth grade and eventually drop out. 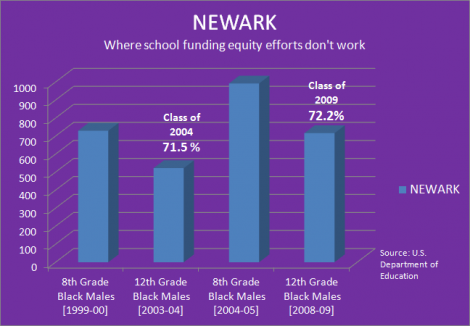 These numbers are not signs of success. In fact, it’s even worse. After all, the kids from the Class of 2009 were in second grade in 1999, the same year New Jersey was ordered by the state supreme court to implement a series of measures (including high quality prekindergarten programs) to ensure that children in Newark and other Abbott districts would receive school funding equal and adequate to kids in the suburbs. Essentially, it didn’t matter how much additional money was poured into Newark schools; the results remain as dismal as ever. (This said, the numbers could prove to be different for the Classes of 2010 through 2012, who just began school when Abbott funding kicked in. As a thoughtful reporter and researcher, I’ll at least say that.)

In offering up Newark as a prime example of success, Baker further discredited the school funding equity/adequacy theory. Baker would better-serve our kids if he dropped this theory — which has done more for the pockets of the lawyers, consultants and advocacy center executive directors who promote it than for the children it is supposed to help —  and actually worked on the complex and myriad systemic issues that are behind the dropout crisis that is condemning so many of Newark’s kids to poverty and prison. This isn’t to say that spending money for such things as enriched pre-kindergarten is a bad thing (I would dare say that doing so as part of improving student achievement for the long term makes sense). But tossing more money into a system that perpetuates mediocrity through  low teacher quality, abysmal curricula, and standards that lack rigor doesn’t work. It will take a full reform of American public education — including how teachers are recruited and trained, and the end of seniority rules — in order to make sure that our poorest children get the high-quality education they deserve.