Restricting Charters the Race to the Top Way 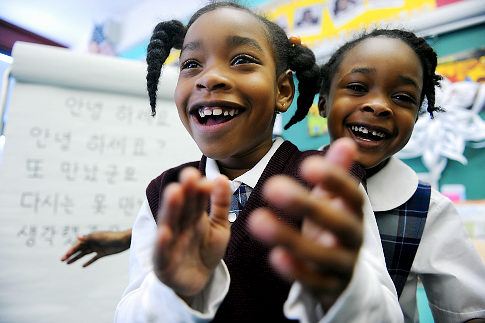 The happy faces of children engaged in learning. It is a beautiful thing. (Photo courtesy of the New York Daily News)

As both the Bluegrass Policy Institute and Fordham’s Andy Smarick have pointed out, several states are putting together what can be best called Trojan Horses reform packages for Race to the Top funding. This can be expected. Even as state legislators and governors want to get their hands on the money, they must also stare down the teachers unions, suburban school districts and skeptical suburban parents who are satisfied with the status quo.

One area in which states may be able to fudge is in the requirement to remove restrictions on the growth of the charter school movement. The U.S. Department of Education regulations governing Race to the Top clearly states that caps on the number of charter schools allowed to be authorized must be removed (this can be found in Appendix B of this Ed Department answer sheet). But it doesn’t clearly state that other kinds of restrictions on charter school growth can exist. This is a problem. In many states, there are terms and rules in charter school laws that essentially act to restrict the growth of (and diversity within) charters.

One method is to limit their existence to large urban areas. In Missouri, charters can only be opened in St. Louis and Kansas City. Although the rules initially were written in order to bring competition and choice to poor urban families stuck with woeful traditional public schools, the rules essentially keep charters out of suburbia. Suburban districts, therefore, remain safe. Massachusetts’ own Race to the Top reforms, for example, still essentially restrict charter schools to the poorest and worst-performing school districts.

Another is to require charters to be approved by traditional school districts. Considering that they operate existing public schools, this also deters charter school expansion. Suburban school districts, in particular, have little reason to embrace any kind of competition. This is why there are fewer charters in Maryland and Virginia, which have this requirement, than in neighboring D.C., which doesn’t — even though D.C. has a far smaller student population. Although exceptions to the rule are usually made in the case of big cities — because charters are supposed to help the parents who live there — there are occasional exceptions: The massive Los Angeles Unified School District, for example, attempted to frustrate charter school expansion efforts until public pressure forced its hand.

And though Race to the Top regulations can be interpreted to ban states from restricting the kind of students that can attend charters, this may not necessarily stand up once the vetting process begins in earnest. As I’ve noted in my recent report on charter school diversity, Tennessee only allows charters to enroll students who previously attended other charters, were formerly enrolled in laggard traditional public schools, or have failed the state’s standardized tests. Such rules may be rare, but they do exist — and states may not feel the pressure to abide by the spirit of the program.

It isn’t enough to just lift a cap on the number of charter schools. Expanding where charters can operate will go a long way in providing all children and parents the kind of options they seek in order to improve their educational destinies. It also goes a long way towards blunting the objections of civil rights activists who see charters as merely a path towards segregation (and ignore the concerns black and Latino parents have for ensuring high-quality curricula — and the presence of successful role models of similar race and ethnicity — for their children).

There will be plenty of more battles to come, even as Race to the Top is clearly spurring states such as California and New York to engage in truly meaningful reforms. The pressures politicians face from opponents to Race to the Top is strong — especially for Democrats in fear of losing statehouse and congressional seats and Republicans representing suburbia. There’s also the lack of focus among school reformers on rallying parental backing. And in  many states, a lack of well-supported grassroots reformers is also a problem. In short, school reform is a long way from being sustainable.

At the State LevelResearchschool dataThis is Dropout Nation